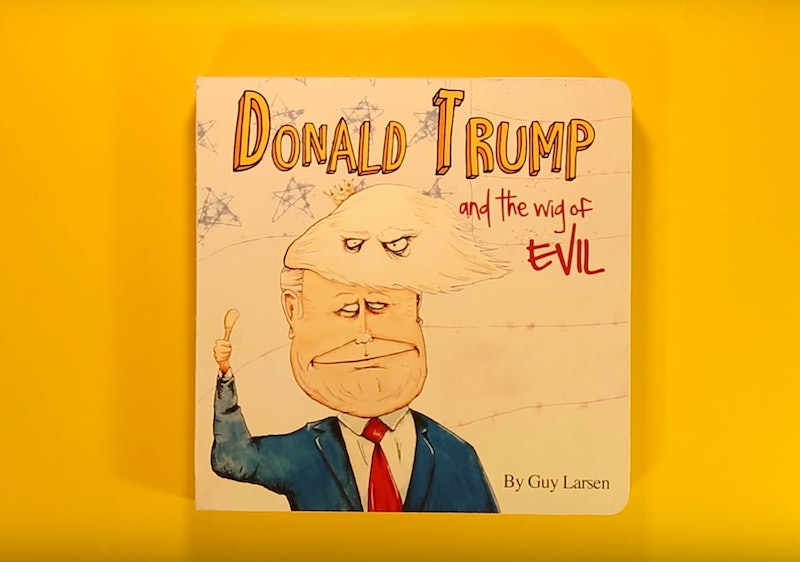 Presidential hopeful Donald Trump may have promised to “Make America Great Again,” but thus far his campaign has been characterized by a series of outrageous, often reprehensible, comments that have kept him persistently in the news and, maddeningly, have somehow managed to only bolster his popularity. In his new children’s book about Donald Trump, London-based filmmaker and artist Guy Larsen wonders whether Trump himself is responsible for the awful things he says, or whether something more nefarious might be at work. “Can Donald Trump really believe in the scandalous soundbites he keeps saying?” Larsen asks in Bored Panda. “The only conclusion I could come to — there’s something evil, and much more sinister, calling the shots.”

Jokes about Trump’s hair are nothing new, but have we seriously considered that it might be possessed by some kind of evil, demonic spirit? I mean, it's a possibility, right? Larsen’s book, Donald Trump And The Wig Of Evil, suggests that Trump himself might be a decent guy, held in thrall to “A blond haired, racist Aryan wig.” The book, with its colorful illustrations and thick pages, may look like a kid’s book, but it’s definitely penned for adults, featuring some gruesome images of Trump’s wig going AWOL (and a shout out to horror masterpiece Alien).

Grab yourself some milk and cookies, and settle in for story time:

You can find out the end of the story in Larsen’s video, below: (FYI, it’s slightly NSFW.)