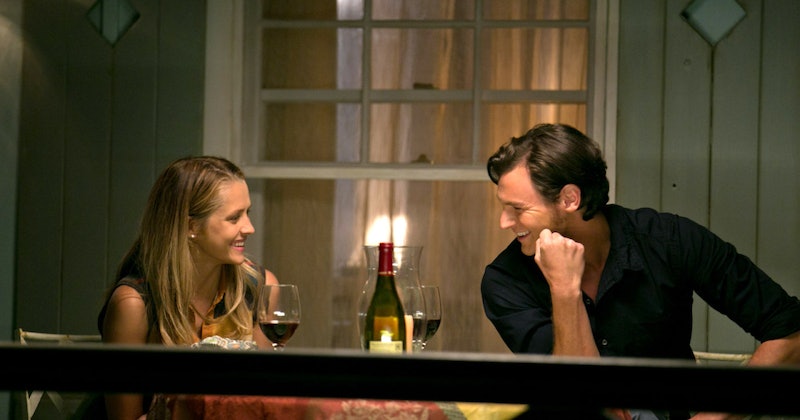 It's already over a month into 2016, and that can only mean one thing: it's time for a new Nicholas Sparks movie. The Choice, the newest film based off a book by The Notebook author, is this year's Sparks-created romance. The film stars Teresa Palmer as Gabby, a girl-next-door (literally), who falls in love with her goofy neighbor Travis, played by Benjamin Walker. In traditional Sparks fashion, Travis courts Gabby with a relentlessness that borders on stalking, and wins her over with his undeniable charm, all while the duo enjoys days on the beach near their small (likely Southern) town. Like Rachel McAdams and Ryan Gosling before them, there's no doubt that Palmer and Walker are about to get huge career boosts from the film, but, while Palmer is already well known for her roles in Warm Bodies and I Am Number Four, who Benjamin Walker is is a bigger mystery. He's a relative unknown, so before you fall in love with him on screen, here's everything you need to know about why he's one of the most intriguing new stars of Hollywood.

Walker, 33, might not yet be a household name, but he didn't exactly come out of nowhere. The actor is a Julliard graduate and has been working in film and on stage for years — his first IMDB credit is for playing a young Alfred Kinsey in Kinsey (Liam Neeson played his older self). And that's just one of the many interesting things about your brand-new crush:

"I do believe in love. And I do believe that it can last a lifetime," Walker told News Corp Australia Network in an interview. In real life, Walker is married to The Maze Runner actress Kaya Scodelario. The two met on the set of The Moon and the Sun almost two years ago and were married in March of 2015.

Walker was married to Meryl Streep's daughter Mamie Gummer from 2011 to 2013 after meeting in 2008 when they both starred in a Broadway production of Dangerous Liasons. The two had an "amicable" split, according to Gummer's representative.

Walker might not have a long list of films on his resume, but that's only because he's been busy singing and dancing in various Broadway productions. He played the lead in the musical hit Bloody Bloody Andrew Jackson and starred opposite Scarlett Johannson in a revival of Cat On A Hot Tin Roof. The actor is currently preparing to play the lead in the Broadway debut of American Psycho — The Musical.

Walker discovered a love for stand-up comedy when he was a student at Julliard. "Technically, you weren't supposed to perform in public while you were studying there, but I would go out and do open mike nights," Walker told Interview Magazine . After college, Walker founded "Find the Funny," a monthly show for amateur stand-ups and writers to help them get their feet wet.

6. He's Shared The Screen With Other Nicholas Sparks Heartthrobs

Walker had a small role in Flags of Our Fathers (2006), Clint Eastwood's film about the American side of the Battle of Iwo Jima. Also cast in the film? Eastwood's son, Scott, who just had his own Nicholas Sparks moment, starring as the hot cowboy in The Longest Ride. (He also recently starred in In The Heart Of The Sea opposite Chris Hemsworth, whose brother Liam starred in The Last Song, yet another Nicholas Sparks film.)

Walker was actually originally cast as The Beast in X-Men: First Class, but left the film after getting the leading role in Bloody Bloody Andrew Jackson. "That was a complicated decision, but it boiled down to the fact that I was going to regret not being a part of that show on Broadway. When you're lying there dying, those are the things you think about, and I didn't want that particular regret," Walker explained in an interview with Playbill. Nicholas Hoult ended up grabbing the role, so, in a way, we have Walker to thank for giving us the dreamy Hollywood couple of Jennifer Lawrence and Hoult. The more you know...

You now know everything you need to know about your newest romantic crush, Benjamin Walker.