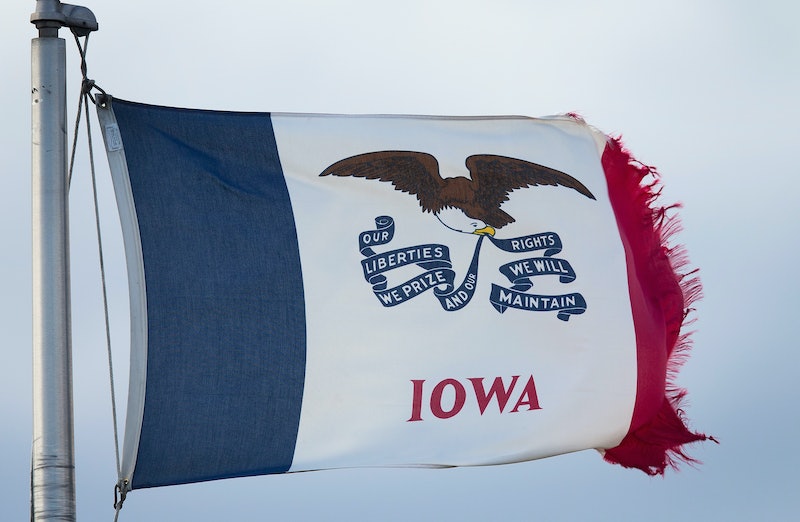 This Monday marks the Iowa caucus, the first presidential primary selection round of the season. To say that Iowa is a big deal on the campaign trail would be an understatement. The state's caucus results set the mood for the election season by helping to determine which candidates have a large enough constituency to make the cut. The voices of Iowa residents are the first to be heard .. but just how many voices are there? Shockingly, politicians' prominent focus on winning over the state may be disproportionate to Iowa's voter turnout.

Considering the hype that surrounds the presidential debates and each candidates' every mistake, it may come as a surprise that not many people vote in the primary/caucus elections. This isn't just the case for Iowa, either — it's a national trend. According to a study conducted by Drake University Professor of Political Science Dennis Goldford, on average, only 17-20 percent of eligible Americans vote in the primary elections and caucuses. And in Iowa, voting isn't as easy as it is in most other primary elections. Iowa has a closed primary, which means that only registered party members can participate. This takes a toll on members of the younger generation, who often barely have enough political knowledge to fully commit themselves to one party.

In that sense, the Iowa caucus leaves little room for voters who are not absolutely decided. For example, Independents are not allowed to participate, leaving little room for gray area — a region in which most Americans reside. Does the low voter turnout in Iowa justify its being the state to set the primary election pace? After all, just a handful of people are being granted the opportunity to kickoff the election process. According to PBS, Iowa's voter turnout represented just 0.1 percent of the entire population of the United States in 2008 (and that was an election that attracted more voters than usual). Additionally, the participants have no choice but to represent one of just two political parties, perpetuating America's tendency to pit Republicans and Democrats against each other as irreconcilably opposite.

In his Iowa Caucus Project, Goldford emphasized that Iowa's popularity is based most heavily on the simple fact that it's the first to hold elections. This is of paramount importance to politicians, but Iowa residents don't seem to perceive it as a pressing reason to attend their local caucus. And with candidates like outsider Donald Trump and far-left progressive Bernie Sanders, this could be devastating. When it comes to attracting a younger voter population, Sanders may have an advantage over Trump. According to data collected by Goldford for the Iowa Caucus Project in 2008, 17-19 year-olds made up just 11 percent of Republican caucus participants, while that same demographic made up 22 percent of Democratic caucus participants.

According to The New York Times, voter registration in Iowa over the few months preceding January has increased by about 10,000 — a number relatively low in comparison to past election seasons. Aside from obstacles unique to caucuses, the weather is another significant determinant of voter turnout. Fortunately, Iowa is narrowly in the clear for Monday evening, although a snowstorm is expected to hit on Tuesday. A Monmouth University poll projected the political alignment of those Iowa residents who will brave the conditions and the more immersive caucus process. Half of self-proclaimed caucus-goers say they're undecided, leaving room for some major shifts after the process is complete. Though the voters must align themselves with one of two parties, these next few hours will prove critical as they make up their minds.