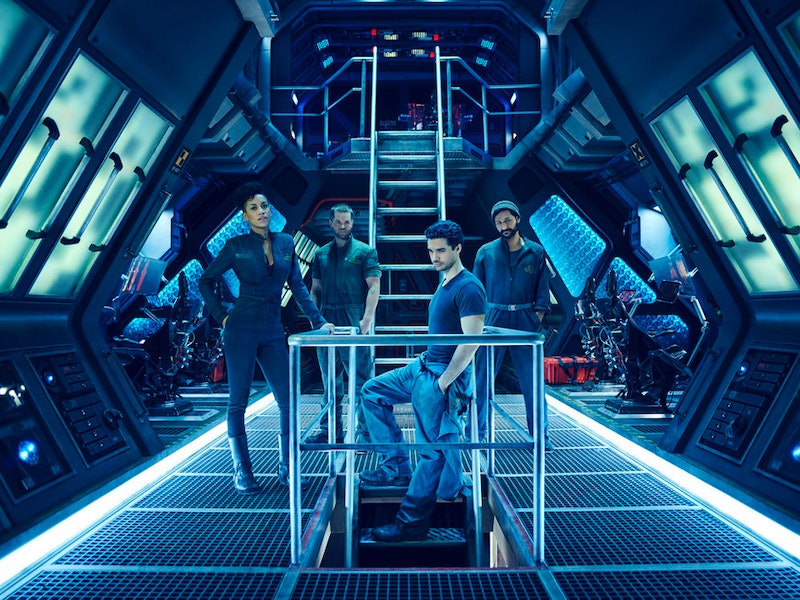 Syfy looked to the book world for inspiration and came up with one of their newest series, The Expanse, based on the novel series of the same name by James S. A. Corey. Following a futuristic mystery, The Expanse has been praised for everything from its sci-fi visuals to the well-developed characters. Even The Expanse's faithfulness to the novels has earned the show some cred with fans of the books. So, with the show's first season wrapping up, will The Expanse return for Season 2, and if so, when?

According to Deadline, Syfy renewed the series only four episodes into its first season and The Expanse Season 2 will air in early 2017. Additionally, Deadline reported that Syfy boosted the episode order from 10 to 13, which means viewers will get three extra episodes in Season 2! Of course, the downside to this news is that fans have to wait an entire year before The Expanse comes back — that's some Sherlock-level waiting ahead for fans. So, since waiting can be especially difficult without something to pass the time, here's a list of seven other sci-fi series based on novels to watch while you wait. (Pro tip: If you finish all the shows and still have time left, try reading the books!)

Before The Expanse premiered, Syfy debuted the three-episode miniseries Childhood's End based on the 1953 Arthur C. Clarke novel of the same name. It follows a peaceful alien invasion that turns out to be the opposite of peaceful as humans fight for their freedom on Earth. The mini-series is available in its entirety on Hulu and Syfy's website.

Following a small town that is suddenly cut off from the rest of the world by means of an indestructible dome, this sci-fi series ran for three seasons on CBS. It's one of many television shows, TV movies, and films based on the work of Stephen King, and, if your interest is piqued, the first two seasons are available to watch on CBS All Access.

The Man in the High Castle

Technically, the original novel is categorized in the Alternative History genre, but since television doesn't have anything quite that specific, Amazon's The Man in the High Castle is labeled as sci-fi. It's based on Philip K. Dick's book of the same name and tackles the idea of what would have happened to the United States if the Axis Powers (Germany, Italy, and Japan) won World War II. If you're looking for more history with your sci-fi, the entire first season is available on Amazon Video.

Did you know the late '90s/early '00s alien high school drama Roswell was based on a book series? Well, now you do. Roswell High was a 10-book series written by Melinda Metz and edited by Laura J. Burns, both of whom went on to become staff writers for the show. If you want to watch some alien high school drama (that follows young versions of Shiri Appleby and Katherine Heigl) all three seasons of Roswell are available on Netflix.

HBO's series based on Tom Perrotta's novel of the same name has very little science in it, but the premise is certainly akin other science fiction shows/books/movies. The Leftovers chronicles the lives of those left on Earth when a "Sudden Departure" causes millions of people to disappear. The critically-acclaimed first two seasons of the show are available to watch on HBO Go.

The novels by Diana Gabaldon on which Starz's series is based have gotten a reputation for being historical romance, but the premise of a 1940s women being sent back in time to 1740s Scotland is science fiction as far as I'm concerned. Outlander isn't your typical sci-fi story, but it's worth a watch. The first season of Outlander is available on Starz's website.

If you know much about Kass Morgan's book on which The CW's sci-fi drama, The 100, is based, then you know the TV show is incredibly different. Still The 100 television series has earned a serious amount of praise from critics for its fantastic sci-fi storytelling. (Seriously, it has been compared to fan-favorite sci-fi epic Battlestar Galactica.) Sound good? The first two seasons of The 100 are available on Netflix.

So, I know waiting an entire year for The Expanse to return is going to be seriously tough, but there are plenty of other sci-fi shows out there to help you pass the time. Hopefully the year will fly by!

More like this
A New Season Of The Midwich Cuckoos Could Be Coming “To A Town Near You”
By El Hunt
The Magic Is Over For Charmed
By Kadin Burnett
'The Summer I Turned Pretty' Book Ending Is An Emotional Rollercoaster
By K.W. Colyard
The Future Of 'All Creatures Great & Small' Is Confirmed & Wedding Bells Are Ringing
By Rebecca Fearn and Frances Stewart
Get Even More From Bustle — Sign Up For The Newsletter