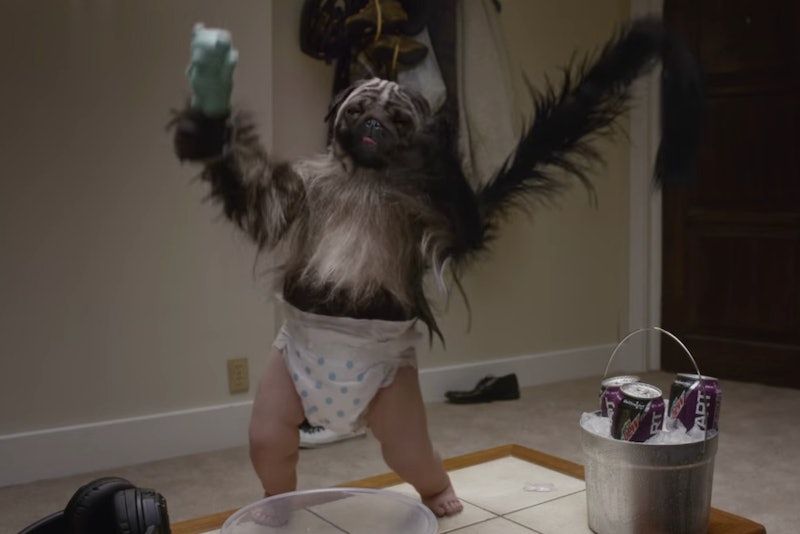 A puppy, a monkey, and a baby all in the same room sounds innocuous enough — perhaps even really adorable, if not overwhelming. However, when those three things are combined into one, it can make for an unholy trinity as Mountain Dew's Super Bowl commercial featuring the puppymonkeybaby will show on Feb. 7. The ad isn't the first time the company has highlighted its Kickstart product during the Super Bowl and just like with last year's commercial, get ready to feel a bit confused. Wait, scratch that — get ready to feel the most confused you have possibly ever felt.

The premise of the 2016 Kickstart Super Bowl commercial follows closely to that of the 2015 one, with three guys hanging out on a couch, not feeling motivated to go out and party. While the 2015 commercial had Kickstart, which contained Mountain Dew, juice, and coconut water, motivate the men to start twerking with their dog, the 2016 commercial dudes need more of a push to get down, which comes in the form of the puppymonkeybaby.

The tag of "three awesome things combined" is also fascinating when one of those "awesome" things is a baby, since I don't really think babies are part of Mountain Dew's target market. Although, I guess if this creature busted into my apartment with a bucket full of Kickstart and danced at me to drink it, I would drink it out of sheer terror. So perhaps this commercial is the stuff of weird, marketing genius.

No matter if you look at puppymonkeybaby as the creepiest thing in the world or as memorable marketing, here's a breakdown of the Mountain Dew teasers leading up to the full length commercial featuring the beast in all its glory. Don't say I didn't warn you.

The first glimpse of the puppymonkeybaby was released by Dew's YouTube channel on Jan. 27. This teaser featured the baby and monkey parts of the creature — not the dog parts — and while the hairlessness of the baby legs combined with the monkey torso was freaky, I don't think it adequately prepared me for the real deal.

This teaser could almost make you think the puppymonkeybaby is going to be cute since you only see it from behind, but then you see its big monkey hands reaching for baby toys and a sense of dread fills your heart knowing that a truly unnatural creation is in front of you.

Yet again, the little face of the pug puppy was close to winning me over in this teaser, which is truly saying something because I don't often find pugs that adorable. (I credit my positive feelings toward pugs to Percy from Disney's Pocahontas .) Then the puppymonkeybaby started hitting itself to "get pumped" and unbearable uneasiness took over.

If the teasers didn't freak you out sufficiently, then the full commercial that will air during the Super Bowl surely will. The puppymonkeybaby's crazy gait combined with the fact that it speaks its name is scary enough, but then there is so much licking — so much damn licking — that it pushes me over the edge.

While I'll never understand why the men in this commercial look so enamored by this animal that is clearly from the island of Dr. Moreau, I guess it's all just a testament to the power of Mountain Dew.