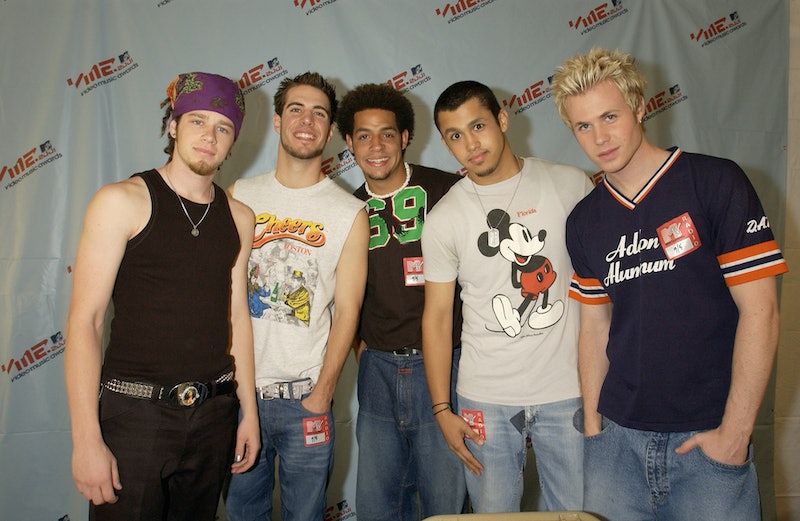 There are some heroes who deserve to be honored as often as possible. And one such hero hails from the reality show Making the Band. In the second season of the series, “All or Nothing” quintet O-Town went to a Planet Hollywood restaurant, judged the Making the Fan O-Town fan contest, and declared one contestant The Ultimate O-Town Fan. And holy morpharotic dreams, did the winner ever deserve that title.

At the beginning of the segment, we are introduced to a young woman named Carrie. When it was Carrie's turn to prove just how deep her O-Town fandom runs, she took the stage, grabbed the microphone, and told the boy band and their screaming admirers that she “went through an hour of pain and spent $175” in the name of her O-Town o-bsession. What could she possibly mean by that? I don't understand. Did she, I don't know, pay someone $175 to slowly rip off her fingernails and toenails? Nope! Way better/way less disgusting: To prove her dedication to the group, she tattooed the O-Town logo to her lower back. I repeat: She tattooed the O-Town logo to her lower back. Forever and always an icon.

Spoiler alert! The lady with the O-Town tattoo ran away with the whole kit and kaboodle. Of course she won the contest. Are you kidding me? Her challengers did not stand a chance (sorry, O-Town pizza). So what did she win, exactly? A permanent badge of honor, for starters. Oh, and she definitely earned a spot in the Early Aughts Boy Band Fan Hall Of Fame. As far as I'm concerned, that's about as good a prize pack as you can get.

The Making the Fan segment begins at the 1:29 mark:

Where is Carrie now? I tried and failed to find her on social media (womp womp), but I assume she's somewhere listening to "Skydive" on repeat.