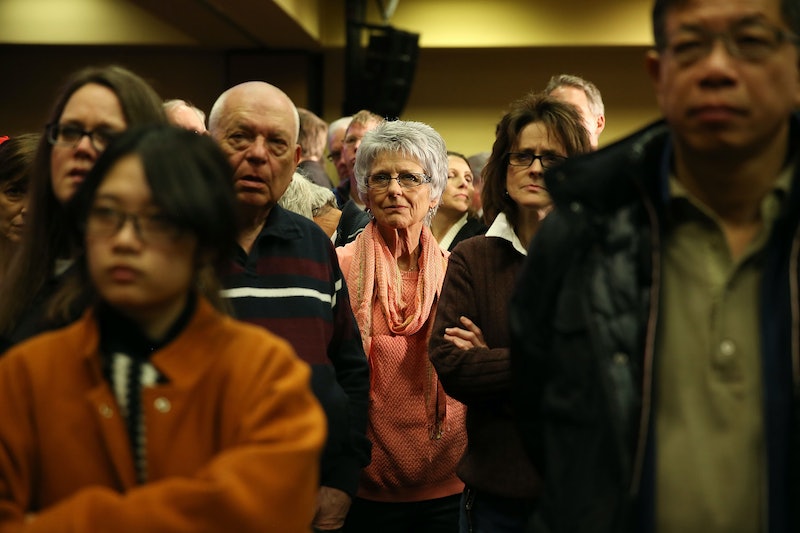 Iowans gathered Monday to cast the first votes of the 2016 presidential race at caucuses expected to shake up the virtual neck-and-neck Democratic race between Hillary Clinton and Sen. Bernie Sanders and help trim the lengthy list of Republican candidates. Winners and losers will be declared after votes are counted in Iowa, and while a win in the Hawkeye State could certainly add momentum to a candidate's campaign, it's by no means a guarantee they'll sweep the nomination at their party's convention. On the other hand, for candidates unable to make a strong showing in Iowa, the road ahead looks much more bleak. Candidates who received the least votes in Iowa are likely contemplating calling an end to their campaigns at this very moment (or, at least nursing their injured pride with a few slices of sheet cake).

In Iowa's Republican caucus race, former Virginia Gov. Jim Gilmore garnered the least amount of votes. With 91.31 percent of precincts reporting, a whopping 12 people turned up at Iowa's 1,681 caucuses to cast votes for Gilmore. More people showed up to caucus for the Republican Party's "Others" option than for Gilmore — 102 more people to be exact. Gilmore had so few votes he couldn't even muster 0.05 percent of the vote in Iowa, let alone 1 percent. The former Virginia governor was stalled at 0.01 percent of Iowa's total votes when the Associated Press declared Ted Cruz the GOP victor of the night. While some of his competitors were announcing decisions to end their campaigns, Gilmore kept how he felt about his 12 Iowa voters — and the future of his campaign — to himself.

Rick Santorum, who won the majority of votes in 2012 at Iowa's Republican caucuses, also had trouble garnering 1 percent of the vote this year in a complete 180 from his last presidential race. With nearly all of the votes counted, Santorum was recorded to have collected 1,666 votes, earning him 0.97 percent of the night's vote. Despite his dismal performance in Iowa on Monday, Santorum said he was staying in the race, according to The Washington Post's Robert Costa.

For Democrats, the Iowa caucuses became the Clinton and Sanders show early on in the night after it became clear Martin O'Malley would not garner even one delegate in the state. The former governor of Maryland announced he was suspending his campaign after early vote tallies showed he had failed to connect with Iowans. With 92.56 percent of precincts reporting, O'Malley had pulled just 0.54 percent delegate strength compared to Clinton's 50.15 percent and Sanders 49.32 percent.

Winners or losers, it's never perfectly clear on caucus night whether what happens in Iowa will stay in Iowa. While Monday's vote is notable because it represents the first time votes are cast in the presidential election season, Iowa's caucuses may not have a significant influence on candidates' fate as the race pushes forward with primaries kicking off in New Hampshire later in the month.