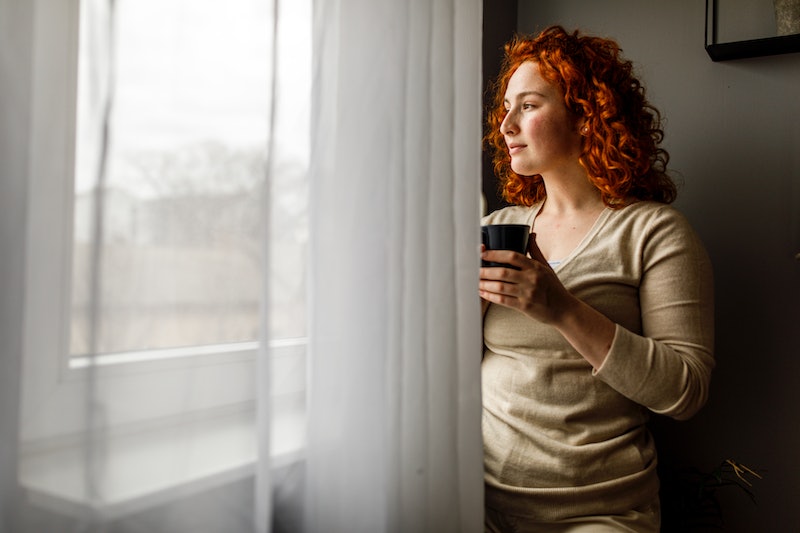 I can't tell you too much about my parents' divorce, because I don't really remember much about them being married. Though legal documents have my parents splitting up shortly after my seventh birthday in 1989, I couldn't tell you about anything about their time as a couple, except that they once got into a screaming fight while we were waiting to have pancakes with Goofy at DisneyWorld (I was five, and more annoyed than shocked). Family lore had them splitting up dozens of times before they ever made it to the altar to begin with, and nothing I saw transpire between them ever made me doubt it. Even though I was still young enough to think that being a princess/ballerina/unicorn was a viable career path when they divorced, I experienced nothing but relief over their split.

And even though my post-divorce childhood was far from perfect, my stance never changed — I always knew that whatever problems I went through with my family, they'd be a hundred times worse if my parents were still sticking it out and suffering. This, of course, flies in the face of a lot of accepted wisdom about how divorce impacts children for the worse. According to oft-quoted research, we're more likely to divorce ourselves: as University of Utah professor Nicholas Wolfinger noted on CNN, risk of divorce rises 50 percent when one member of a couple has divorced parents, and 200 percent when both members do. And according to many concerned types, we're more likely to "give up" on relationships or "have trouble trusting others."

I can only speak for myself, of course, but I am grateful that my parents split — I think it played a role in everything from my belief in my right to be happy to my ability to actually maintain a successful romantic relationship. Here's why I would never, ever change anything about the way my parents' marriage ended.

A lot of ink has been spilled on the supposedly negative fact that kids of divorce end up trying to manage two separate family lives. A 2005 New York Times article covering the work of Elizabeth Marquardt, "an affiliate scholar with the Institute for American Values, a nonpartisan advocacy group that strongly emphasizes marriage," noted that in Marquardt's work about the negative impact of divorce, "The lonely task of [children learning to reconcile] two worlds is a constant theme." Marquardt claims that having to participate in two different family lives, each of which may feature different rules and values, is inherently stressful for children. While it's true that this can be stressful for children of divorce, what's missing from this story is the admission that spending your childhood exposed to two vastly different world views can also be positive.

Shuttling between my arts-obsessed Jewish mother and intellectually-focused Catholic dad, I learned that there was more than just one set of values out there, and that it is actually pretty easy (and often kind of fun) to learn about ones that weren't necessarily familiar to you. And through exposure not just to my post-divorce parents, but also their friends and partners, I learned that there were many different things to believe and ways to live your life, and that no one was more inherently correct than the others.

2. I Didn't Have To Watch My Parents Be Miserable Together

I won't try to claim that divorce was an instant salve for either of my parents — the financial proceedings, which dragged on throughout my childhood, sucked my dad's energy, and the reality of a split seemed to be the thing that sent my already-unstable mother into an abyss of serious mental health issues. But I still believe that we were all better off than we would have been had my parents tried to stick out their angry and often acrimonious marriage.

The old Louis CK chestnut — "divorce is always good news. I know that sounds weird, but it's true, because no good marriage has ever ended in divorce" — was an absolute truth in my experience. According to one study quoted by the New York Times in 2007, "one year after the divorce, both men and women are happier for their decisions" — and kids are more resilient in the long run than many of us believe, as well.

According to a 2002 study reported in Scientific American, "many children experience short-term negative effects from divorce, especially anxiety, anger, shock and disbelief. These reactions typically diminish or disappear by the end of the second year. Only a minority of kids suffer longer." Two years of theoretically increased suffering feels, for me, like a small price to pay to keep my parents from being miserable for decades.

3. I Got To Know My Parents As Individuals Instead Of As An Unhappy Couple

When my parents were together — and I mean not only during their marriage, but during their many post-divorce attempts at reconciliation — they were not individuals; they were Them, a fearsome pair consumed by their rage towards one another and inability to clearly communicate. I didn't know their personalities when they were together; I just knew that in that moment, one of them was the victim and one was the victimizer, and I would really be happiest if I stayed out of their way. Like many unhappy couples, their joint misery consumed their individual identities.

After my parents permanently parted company, I got to know my mother better as an individual, and I appreciated that (even though it turned out that I didn't really like her). Removed from the fog of war that had surrounded my parents' relationship, I saw my mother as an individual — which is almost impossible when your parents are embroiled in a high conflict relationship. And over a decade after my folks split up, I reconnected with my father and found that as an individual he was actually someone I liked and admired, and a very different person from the role he had played in my parents' relationship.

Again, this has less to do with the pluses of divorce than the minuses of staying in a bad marriage — which is also the problem with so much research on what divorce "does." It often doesn't take into account the harm that keeping parents and kids inside a bad family dynamic can do.

4. I Don't Feel Pressure To Settle

Are we children of divorce more likely to divorce because we're love-hating goblins who shudder at the caring touch of another human being? Or are we more likely to get divorced because we know, first hand, that if we find ourselves stuck in a bad relationship, we don't have to spend our lives locked into it? Anthropologist Helen Fisher supports the latter explanation, noting in a CNN profile that

[C]hildren of divorced parents may be more likely to spot a troubled partner and avoid toxic relationships. These children are often more resilient and overcome obstacles quicker in relationships, she said. They may also take more time to determine whether marriage is the right choice for them, and studies have shown divorce rates fall when people marry at a later age.

In my opinion, this is the problem most divorce statistics run into: few of them analyze happiness or sadness, wisdom accrued or lessons learned; they just measure marriedness or singleness, as if these are the only qualities worth considering. But many of us raised in divorce families know to take our time in getting to know people, and not make rushed decisions when it comes to commitment — which, far from being some kind of character flaw, only enriches my life.

5. I Don't Believe That Marriage Is A Fairytale

There's a common line of thinking that children who witness divorce learn to "give up easily" in matters of the heart — that we'll somehow immaturely throw in the towel the second our relationships start requiring work, instead of laboring to smooth them out. This line of thinking always makes me laugh — and not only because it positions knowing how to end a relationship as some crazy Masonic secret that the children of non-divorced families may not be aware of. It's because it assumes that working things out is always the right idea.

But "working on" or "saving" a relationship is not always good; it's not always a unilaterally preferable option to ending things and moving on. Similarly, admitting that a relationship isn't working is not always (or even often) a sign of selfishness or weakness. Over a decade into the 21st century, many of us continue to ascribe magical properties to the institution of marriage — that it is a show of commitment that can turn a floundering relationship around, that it is powerful enough to change the personality flaws of one or both spouses, that is can always be saved if both parties want it enough.

The statistics on these supposed divorces enacted for trifling reasons, that leave the parties involved unhappier than they were to begin with, never seem to materialize. So perhaps we should accept that most people who choose divorce for themselves know what they're doing — and many children of divorce, rather than being permanently damaged by their parents' romantic failures, are just as often learning from them.

More like this
The Best Time To Date After A Breakup, According To Experts
By Bustle Editors
20 Things You Should Never Tolerate In A Relationship
By Rachel Sanoff and Kathleen Ferraro
12 Ways You're Sabotaging Your Love Life
By Teresa Newsome and Lexi Inks
Everything Jarrette & Iyanna Have Been Up To Since 'Love Is Blind'
By Brad Witter
Get Even More From Bustle — Sign Up For The Newsletter