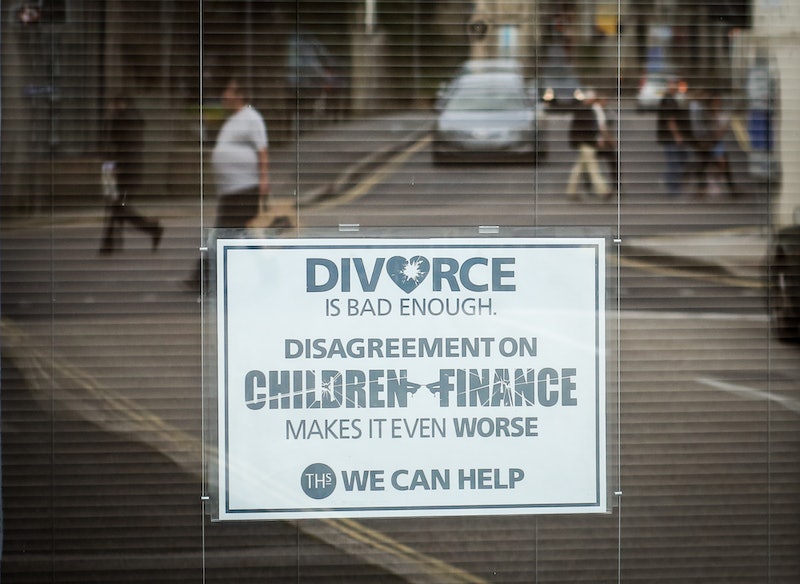 When my parents divorced, I was one month into my high school career. A 14-year-old for whom the prospect of marriage was distant, I didn’t think of how their divorce would affect my future; I only thought of the immediate impact on my life. Now, as a 28-year-old with double the life experience and access to lots of internet data, I’m acutely aware of what the statistics say about me and my fellow children of divorce (“the club” as we call it in our internal email communication). Statistically speaking, my hypothetical marriage is more likely to fail than those of my peers with married parents, but I’m still really excited about the idea of getting married someday.

The divorce rate is 50 percent higher when one partner comes from a family with divorced parents (the dreaded BROKEN HOME), says Nicholas Wolfinger, author of Understanding the Divorce Cycle: The Children of Divorce in Their Own Marriages. That number skyrockets to a whopping 200 percent higher when both partners have divorced parents. Given how pervasive divorce is in western societies — and America in particular — this isn’t an insignificant proportion of us. Our club is not an exclusive one. Between us, we've seen some messy breakups, so it isn’t any wonder that members of the club may be slightly (or significantly) wounded and dysfunctional as a result.

In addition to being a member of the club, I’m also a feminist who is critical of the institution of marriage. Specifically, it floors me that we continue to debate whether LGBTQ people should have access to legal marriage. How can any of us respect a state-backed — and encouraged — institution that's reserved for a subset of the population rather than everyone? And heterosexual marriage, even in the developed world, isn’t universally great for women. According the National Coalition Against Domestic Violence, 85 percent of survivors of domestic violence are women. According to a Pew study, 40 percent of working moms say they always feel rushed, compared with 25 percent of working dads. And of course, we know that marriage doesn’t protect anyone from the excruciating pain of infidelity either.

Given my lukewarm (at best) feelings about the institution of marriage and the statistical likelihood that my own marriage will end in divorce, why would I want to partake? My view of marriage has been shaped (or warped?) by my parents divorce, but it hasn’t put me off the concept completely. When I say I’m excited about “marriage,” I’m using the term loosely. What I really mean is that I am in favor of intentional, long-term life partnership. I don’t feel particularly strongly about the state policing my long-term partnership, or having to be registered or pay different taxes than my single friends. As a person who isn’t really religious, I don’t feel any need to have my relationship blessed or be made official by God. But I’m enamored with the idea of a life partner; someone with whom to share space and laugh, someone who will always be my person. I love having a constant snuggle buddy and activity partner, and someone to help me talk through life.

I’ve always been drawn to ritual of any kind, and a wedding ceremony is such a beautiful way to celebrate long-term commitment. The idea of standing up in front of family and friends and saying that we love each other and promise to take care of each other is appealing. I want my community to hold me accountable to my partner, and support us when we struggle. If and when we have children, I’d like that same community to celebrate us (and change diapers for us, and look after them so we can go see a film). A wedding — or any other ritual like the one I’m talking about — is an opportunity to put a start date on a partnership. It’s saying that from that day forward, your life is going to be observed and guided by another person.

A wedding — or any other ritual like the one I’m talking about — is an opportunity to put a start date on a partnership. It’s saying that from that day forward, your life is going to be observed and guided by another person.

I am not naïve enough to think that whatever marriage vows I eventually take are immune to the reality of staggering divorce rates. I, like most of my peers, will enter into marriage with every intention of “till death do us part.” My spouse will be heavily vetted to avoid any unsavory surprises, like a penchant for drinking too much or an unwillingness to be faithful. But people change a lot over the course of decades. When I say those vows, in front of my family and friends, they will not be unconditional, and perhaps that’s what members of the club understand best. We are more likely to divorce because we are less likely to see the marriage vows as sacred or eternal, but I don’t think that’s necessarily a bad thing. We have the potential to hold our partners to a higher standard because our parents showed us that we should only stay in a healthy, functional marriage — just like the married parents of many of our peers showed them through their lasting, loving marriages. We will hold ourselves and our partners accountable to our vows, but we will not accept maltreatment. I will stand by my partner even if he makes horrific mistakes, but my vows will be just shy of unconditional.

This sentiment — I will love you unless I can’t — is what makes it OK for me to partake in the institution of marriage. Although the divorce rate is pitiful, it’s taught my generation that we don’t have to be ignored or beaten or neglected by our spouses just because we promised to always be married to them. It’s an acknowledgement that sometimes life doesn’t go as planned, and it’s not realistic to assume that we can predict anything about the rest of our lives, whether we’re in our twenties or sixties. In my eventual marriage, I hope that I’ll wake up every day knowing that my partner and I are actively choosing to be in the life we’ve created together. Somedays that will be hard, and maybe even unbearable. Somedays I may need a break, or to yell, or to drive far far away. Love can be painful, but pain isn’t a dealbreaker for me. I also know that the level of pain or plateau that each of us can tolerate varies widely. It wouldn’t be fair of me to hold my parents to my definition of “dealbreaker,” just as it isn’t acceptable for anyone to try to define it for me.

I think I’ll be good at marriage. Being a member of the club means that I’ll enter my eventual marriage with eyes wide open. I’ll know that people are complex and so are relationships, and that loving someone every day is a choice. I’ll also know that if our marriage makes my partner and me miserable for a length of time, it’s OK to leave it. I don’t owe it to anyone to be unhappy, and my hypothetical children will be better off for having parents who live authentic lives. Plus, kids aren’t better off with married but supremely unhappy parents.

I’m grateful to my parents for the lessons they’ve taught me about love and partnership. Adversity has given my parents the opportunity to show my sisters and me how they deal with tough communication. The way that they handled their divorce —with class and deep respect for each other — will make me a better partner. They’ve shown me how to be a lifelong family member, and they’ve told me explicitly how important it is to marry someone with whom I’m compatible. I’ve only ever been in two weddings — my mom’s and my dad’s — and although watching your parents get married to other people is complicated, I was proud of them for prioritizing their desire to be in loving, respectful partnerships.

So yeah, I’m going to get married someday. And it’s going to be awesome. Unless it’s not. But either way, I’m excited.

More like this
The Best Time To Date After A Breakup, According To Experts
By Bustle Editors
20 Things You Should Never Tolerate In A Relationship
By Rachel Sanoff and Kathleen Ferraro
12 Ways You're Sabotaging Your Love Life
By Teresa Newsome and Lexi Inks
Nicola Walker’s IRL Husband Is No Stranger To TV Screens
By Darshita Goyal
Get Even More From Bustle — Sign Up For The Newsletter