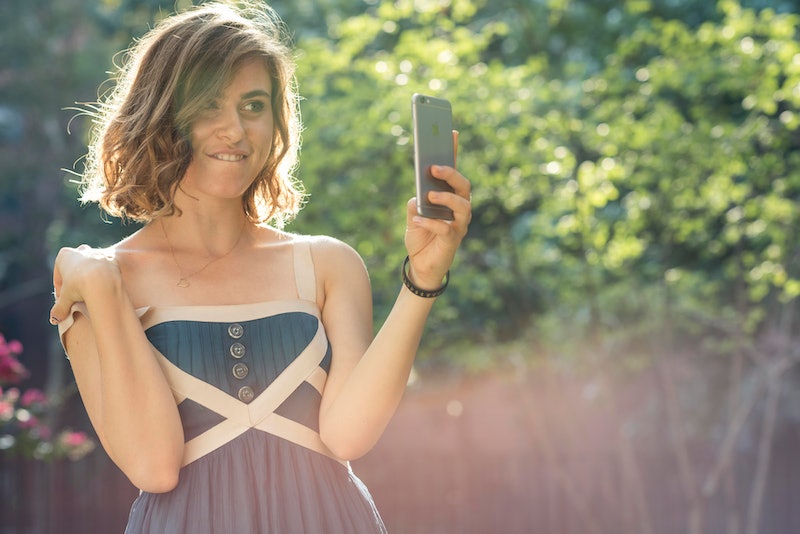 According to a new study from Cyberpsychology, Behavior, and Social Networking Journal, posting too many selfies can ruin your relationship. And it looks like jealousy is to blame. Because while many post selfies as a sign of body positivity or as a means to increase self-esteem, it actually can have a divisive affect. Researchers from Florida State University surveyed 420 users from the ages of 18 to 62, and found a worrying correlation between selfies and relationship struggles.

According to Medical Daily, while people who were more satisfied with their body image posted more selfies, but they also experienced more issues with their partners. Not great. But what does it stem from? Why don't we like people who are open about loving themselves? Well, there were a couple of main things:

Firstly, there was jealousy. People who are with selfie takers were more likely to "spend an excessive amount of time checking likes and comments on their partners’ statuses and social media activity. And, there was also an increase in "negative romantic relationship outcomes", which consists of emotional or physical infidelity, breakup, and divorce. Interestingly, less relationship satisfaction was reported by both parties, not just the jealous partner, but I suppose if it's causing constant jealous rifts that's going to make things less fun for both of you.

The other major issue is that the way we look at people who take a lot of selfies— that behavior is associated with narcissism (unsurprisingly) and psychopathy (more surprisingly). These are normally relationship Achille's heels, as Medical Daily notes, because they are linked to selfish and manipulative behavior. In this instance, it's less of the actual selfie taking that's a problem, and more the personality traits behind it.

It's not the first time we've heard about social media and dating. Here are some other ways our profiles affect our relationships:

1. The More You Post, The More Insecure You Are

You know all those couples constantly posting adorable relationship pictures? Well, they may be less secure than you guess. Research in Personality and Social Psychology Bulletin showed that the less secure you were about your partner's feeling toward you, the more likely you were to post about your relationship on social media. Yikes.

Like, really jealous. So jealous in fact that in one study 15 percent of people said social media was "dangerous" to their marriage, and 16 percent pointed to Facebook specifically as creating envy and tension. In fact, one in four couples have fights about Facebook nearly every week. Which just seems... exhausting. And with 1 in 10 hiding social media passwords or use from their partner, there's a lot of distrust and secrecy around our internet usage, which isn't good for anyone.

3. It's Ruining Your Bedtime

While you might complain that work emails are haunting you at home and keeping you from getting a proper rest, we're all pretty guilty of late-night Twitter or Instagram spirals when we should be in bed. But it's really, really bad for your relationship. A study from bedmaker Warren Evans found that 75 percent of couples went to bed at separate times, and our relationships suffer for it. Facebook will still be there tomorrow, so let it wait until then and hop into bed for some quality time.