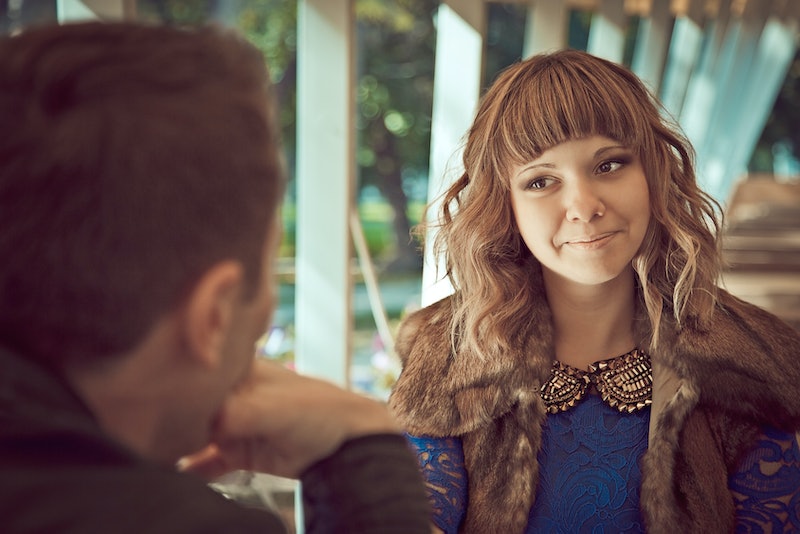 You're en route to a first date, and you're feeling confident. But what, pray tell, should you discuss — what are the best first date conversation topics? And what, by all means, should you avoid? Probably most of us have embarked upon a first date with great potential, only to accidentally discover that our conversation partner is a huge cat person — and we just professed our allergy-borne hatred for cats. Or they have a deep-seated fear of flying because of a bad flight they once had, and we just told them a total horror story about our last trip to the West Coast. Whatever the case may be, it's all too easy to say the "wrong thing" on a first date, because you're speaking with a virtual stranger and there is practically no way of knowing what is going to set them off.

Match just released a survey of 5,504 daters of all stripes, and its incredibly comprehensive topics include — you guessed it — what counts as off-limits first-date fodder, and what conversation subjects get the green light. Before you dash off to your next Tinder date, have a peek at these suggestions, and keep them in mind when tricky topics arise.

Are you jumping with joy that Hillary Clinton is declared the victor of the Iowa caucuses? Would you vote for Trump if you had the chance? Don't hold back — 80 percent of respondents said that talking about politics is A-OK.

2. Bring Up The Bank

An equally breezy subject of conversation is money, so don't worry if you let it slip that you just got a promotion. Gone are the days that everyone was advised to be tight-lipped about money; an equal 80 percent of those surveyed said the discussion of money on a date is totally fine.

3. Have A Religious Experience

Or at least talk about one. Of those who answered the survey, 80 percent said that religion is an acceptable topic on a first date. Articles like this one have been rendered all but extinct by our reality-hungry, openness-happy current culture.

Not only are politics, money and religion satisfactory talking points, politics in particular are considered hot: If you discuss politics, your chances with your date increase by 91 percent. That is epic, so definitely talk about politics all day.

5. Sports Are A Bore

You know what people don't care about, though? Sports. Across the board, less than 25 percent of men and women want to hear what your favorite football team is. If you're at the edge of your seat re: some game happening later, keep it to yourself on a first date.

6. Women Care About The Economy

If you're on a date with a woman, and you feel the inclination to discuss the current state of affairs in regard to the economy, by all means — go for it. Women want you to know about the economy — 41 percent of women, to be exact. So talk about that fascinating piece you read this morning on your coffee date this afternoon.

7. Exes Are Not Up For Discussion

You know what is even less appealing than talking about sports? Talking about exes. Only 14 percent of singles are game for ex talk on a first date. Why talk about the past with someone who has the potential to become part of your present?

Quite a few singles feel as though it's fine to discuss abortion on the first date — 75 percent of singles, in fact. This year's Match survey really underlined the fact that there are few topics that feel too taboo or controversial to talk about right away.

9. It's Not Necessary To Know About Pop Culture

Don't worry about your spotty knowledge of YouTube clips — just 10 percent of women and 11 percent of men care if a date follows celebrity and pop culture. If you have no idea what Gwyneth Paltrow named her kids, you're in the clear.

10. Go Ahead: Talk About Guns, Immigration, And Marriage

Gun control, immigration and marriage equality are all also perfectly good first date topics — like money, religion and politics, 80 percent of singles wouldn't bat an eye if such topics came up. It seems as though in 2016, singles are forward when it comes to voicing their opinions and stances — which is incredibly sexy.