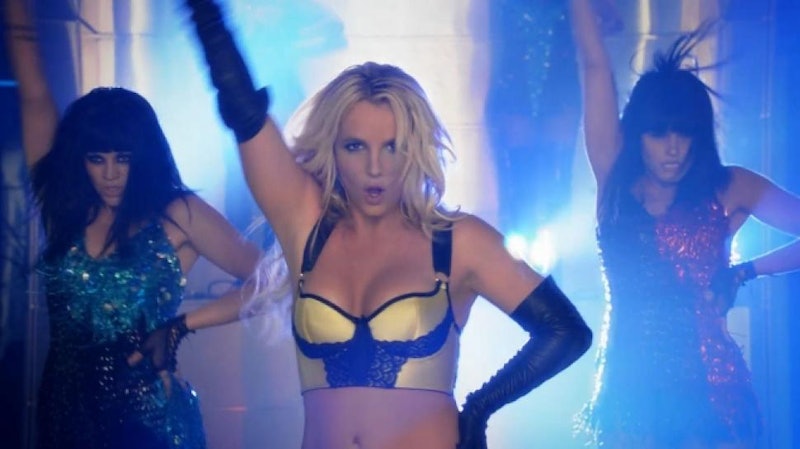 Spotting feminism in songs can sometimes be trickier than you would think. Many songs have been released that contain derogatory, misogynistic lyrics, and as such it can be hard to figure out if that catchy tune is empowering or just straight up not okay. However, as a big fan of whatever is playing on the radio as I am, I've learned to always try and find the best in my favorite songs. Because, after all, some songs might not be as bad as you originally think they are. In fact, once you break down the lyrics — and realize certain specific lines that are being said — a song that may seem cringe-worthy at first may actually become your latest feminist jam. And these surprisingly feminist songs are proof of that.

Overall, it's important for the everyday radio listener to do one thing when listening to a new song for the first time: Keep an open mind. Still not convinced from your initial listen? Well, the next step would be to keep an eye out for the music video. And, from there, maybe even catch some interviews with artist for clarification. Because everything is not always what it seems. However, if you still need more help, perhaps breaking down the lyrics can be the last resort of clarification. And, luckily for you, I decided to break down these songs and explain why I think they're actually feminist. Obviously, everyone has their own opinions on everything, but just hear me out here.

Using the B-word to describe yourself, a friend, or just generally any other woman, isn't exactly considered as a very feminist thing to do. However, when you take a closer look at the lyrics from Britney's 2013 hit single, you start to realize that — despite that term — the song is actually the perfect pump up anthem for any woman who is getting her life together and making her own way in the world. Seriously, there's no denying lyrics as straightforward as, "Bring it on, ring the alarm. Don't stop now, just be the champion."

When first listening to the song — and first watching the music video — you immediately get that Selena just straight-up can't stop obsessing over this guy. But, honestly, what's more powerful than a woman embracing her sexuality? The lyrics that specifically stand out to me are those of, "Give me your all and nothing else." Because, in that line, it's clear that she's not just looking for a fling either. She is putting what she wants all out on the table.

This song came under fire from Lena Dunham and others in the feminist community saying that it promoted rape culture through the lyrics, "When you nod your head yes, but you wanna say no." However, when you take a closer look at the overall lyrics and the message of the song, you find that the Biebs is being nothing less than a gentlemen in the situation — he's asking for clarification before he moves forward because he's confused. He is opening up one seriously heart-breaking, two-sided conversation.

A song about wanting doing anything to get noticed and making guys heads turn may not seem all that feminist on the surface, but this song is actually really female-strong when you realize what's being said. With lines such as "And you don't care what they say" and "So go ahead and say what you wanna say," these girls are in control of their dreams, careers, and their fame. And they don't let anyone take credit for their success but themselves. That's some serious girl power.

This song is incredibly feminist. While it may have been argued that the song was in fact referring to being "worth it" in the looks department, the lyrics actually dive way deeper than that. In saying things like, "I don't wanna waste my time" and "I like it a little rough, not too much, but maybe just enough," the girls are actually being in total control of their situations — both emotionally and sexually. Because, overall, this song is saying that a woman's time and feelings are worth the consideration.

If you're a Taylor Swift fan, you know that Swift is known for basically poking fun at herself with both this song and it's music video. However, if you aren't very familiar with that concept, then, at first, the song might seem as if it's focused on Swift just playing with the heart of any ol' successful, hot guy. But, instead, this song is all about taking charge of your love life and proving that relationships run both ways — with effort needed from both sides of the situation. It's an overall metaphor to the double-standard given between men and women (specifically in regards to celebrities) within our overall society.

When you think of the movie Fifty Shades of Grey, and this song as the movie's theme song, you don't exactly think of it as being all that feminist. However, by stating the emotions and love that she's feeling and giving her confirmation of what she wants, Goulding is owning her own female empowerment. In fact, the lines "What are you waiting for?" even puts the idea of pushing a relationship further than it's going at that current moment into perspective. She's taking the relationship in theory into its next stage.

This song and it's music video received a lot of backlash from the feminist community regarding it's stereotypical "women in the household"-type edge. But it actually can be argued that some lyrics in the song are actually totally feminist. For example, by saying things such as "I deserve it, babe" and "So don't be thinking I'll be home and baking apple pies. I never learned to cook," she's actually using the song to lay down the laws of what being married to her might be like. Yes, it is a bit direct, and she is addressing all of the stereotypes throughout, but she also is taking control of her own situation and what works for her.

OK, so this song is generally about a guy meeting a girl he's attracted to in a club and talking about how much of his "dream girl" she pretty much is. But when you listen to the lyrics closer, you realize that this is much more than a club hook-up. And that best part? His dream girl is totally taking charge — and he finds that incredibly attractive. Seriously, she's the one saying he should shut up and just dance in this situation. Take another listen (and watch that beyond perfect music video), and you'll see it for yourself.

So, what essentially makes a song feminist? A song that supports women, puts the power back in their hands, and doesn't speak negatively about women in any way. And — while it may be easy to pre-judge songs based on their initial language or that first listen — sometimes all it takes is a deeper look to see what is really being said. Alas, music lovers and feminists alike can maintain their hope in the music industry!

More like this
Beyoncé & Madonna’s “Break My Soul” Remix Honors A Group Of Black Icons
By Stephanie Topacio Long
'Traumazine' Has Megan Thee Stallion Twitter Dancing Through Their Feelings
By Grace Wehniainen
Lauv Is No Stranger To Taylor Swift, Drake, Ed Sheeran, & Fame
By Alyssa Lapid
The Real Meaning Behind Marcus Mumford’s “Cannibal” Is Actually Really Dark
By El Hunt
Get Even More From Bustle — Sign Up For The Newsletter