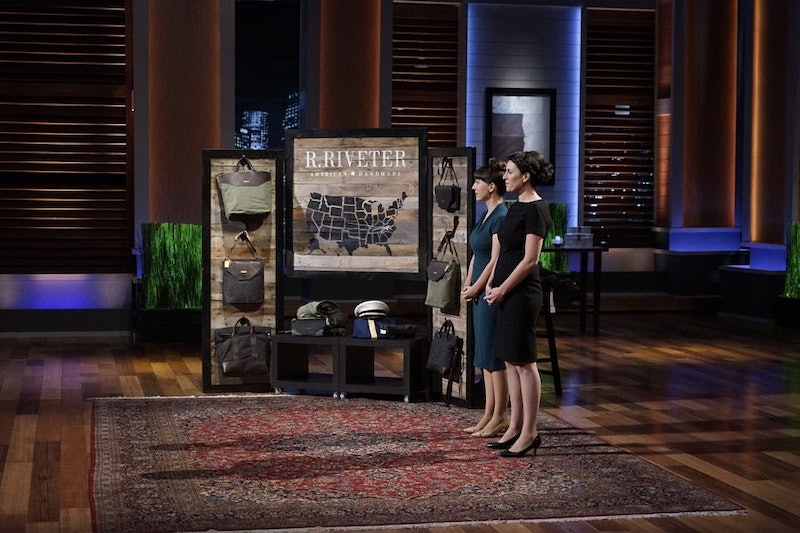 When we think of the military, sometimes we just consider the brave men and women that are on the front lines fighting as the ones who are making a sacrifice. But as anyone who is close to someone serving in the military probably knows, the ones the servicemen and servicewomen leave behind have their lives dramatically affected, too. Friday night's special episode of Shark Tank highlighting entrepreneurs with connections to the military will prove just that by featuring R. Riveter on the show.

Military spouses are basically the thread that keeps R. Riveter together, and the company does a lot to highlight these heroes on the homefront. Once you hear how R. Riveter employs military spouses, it might sound innovative and disruptive in today's world, but it actually hearkens back to what was going on with America's workforce during World War II.

Along those lines, we've actually seen many companies with a variation on its approach to manufacturing walk through those Shark Tank doors and walk away with different levels of success. Like the many products that have come before it on the show, R. Riveter is certainly taking a gamble with a company that seems to have its focus split between making a profit and being philanthropic, but it's certainly nice to dream that R. Riveter will be a riveting product to the millionaire and billionaire investors on Shark Tank.

It Crafts Handbags And Accessories

R. Riveter designs and sells beautiful yet durable handbags and accessories. What's not to like about that?

But It's Style With A Mission

Though all you need to say is the word "handbag" to grab my attention, since R. Riveter is appearing on Shark Tank, there's got to be more to the company than that, right? And there is. What's so special about R. Riveter is that the company's handbags and accessories are made by military spouses. This is beneficial on many levels. For one, it empowers women whose husbands are off in the armed forces financially and emotionally. Because military families often move around a lot, the jobs at R. Riveter are completely mobile with subcontractors making the parts and the pieces that can be shipped to the company's North Carolina-based fabrication shop for assembly, according to Forbes. By keeping manufacturing in the United States, R. Riveter is also keeping jobs in the country and helping to stimulate the economy. The more I hear about R. Riveter, the more I like it.

R. Riveter was founded by Lisa Bradley and Cameron Cruse, both proud Army wives who started the business in the small attic above Cruse's home near Ft. Merrill, Georgia. Both ladies have master's degrees and tried to figure out a way to channel their creative and entrepreneurial energy while living their mobile lifestyles. They eventually realized that other military spouses must be going through the exact same dilemma. Bradley and Cruse decided to design and make handbags because of their uniformity, the pair recounted to ThePilot.com in July 2014. After a successfully funded Kickstarter campaign, which brought in more than $42,000, R. Riveter was on its way to becoming a reality.

With This Company, There's A Lot In A Name

The name of the company is a nod to Rosie the Riveter, the classic figure symbolizing female empowerment that originated during World War II as more women joined the workforce, filling the often rough-and-tumble jobs left empty by men that went off to fight. R. Riveter puts "the humble and courageous spirit of Rosie the Riveter" into all of its products, according to the company's website. R. Riveter also names its handbags after military spouses that made a positive impact on the world. It's nice to see that they're finally getting some recognition for their achievements, too.

The Military Is Literally In The Fabric Of These Bags

As if all of this awesomeness wasn't enough, R. Riveter also repurposes military equipment to make their handbags, such as wool blankets and old army tents, Forbes reports. Feel free to donate "any solid color military material that is in good condition" to R. Riveter, according to the FAQ section of the company's website. You can also have a custom bag made from materials that once belonged to a service member who holds a special place in your heart.

Elena (Nina Dobrev) carried an R. Riveter bag during the episode titled "Do You Remember the First Time?" in Season 6 of The Vampire Diaries. Being loved by humans and supernatural beings alike is a pretty big deal.

It's Easy To Buy These Bags

R. Riveter's wares can be purchased through the company's official online store. The bags range in price from around $35 to $260, depending on the style and size. There are a few other accessories available for purchase on R. Riveter's website as well. If you find yourself in Southern Pines, North Carolina, you can also visit R. Riveter's flagship store to buy these bags.

However, with the help of a Shark investor, who knows where R. Riveter's designs could end up next?