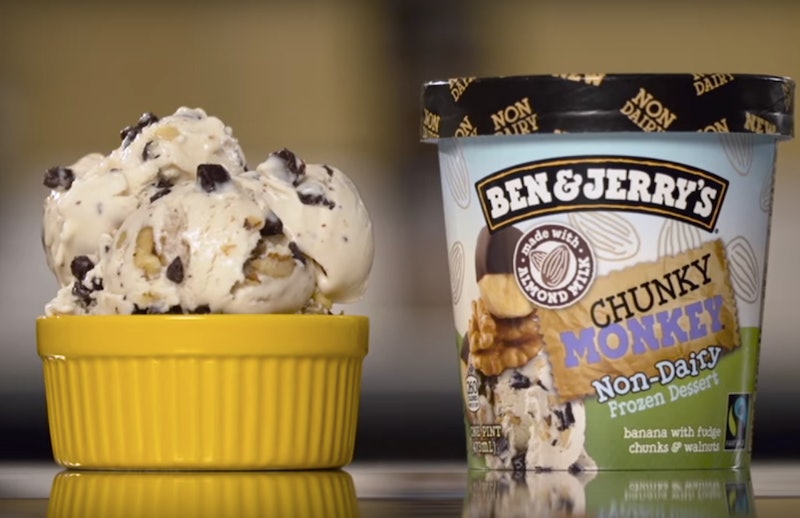 Vegans, your time has come — Ben & Jerry's new dairy-free ice cream flavors have been revealed, and a few of them might sound pretty familiar to fans of the brand. Your favorite ice cream creators announced its new lineup of dairy-free options: Chunky Monkey (yessssssss), Chocolate Fudge Brownie, P.B. & Cookies, and a new flavor created specifically with the dairy-free crowd in mind, Coffee Caramel Fudge. Who cares that it's the middle of February aka the time you're least likely to crave a frozen treat — I want to try every single one of these.

Ben & Jerry's first hinted that it was playing around with the idea of dairy-free ice cream earlier this summer, when co-founder Jerry Greenfield told Metro.co.uk he wanted to give dairy-free customers an alternative that didn't lack in flavor. "In the U.S. there are [dairy free] alternatives from smaller companies, but Ben and Jerrys will be the first mainstream company that will do that and will also do it in a really delicious way," he said.

In November, the brand announced it had come one step closer to making its dairy-free dream a reality — after testing out various recipes and ingredients, it was decided that almond milk would be used as the base for its tasty frozen treats, instead of other alternatives such as cashew milk or soy milk. As Ben & Jerry's explains: "It's so rich and creamy that while digging into a pint you will constantly have to remind yourself that it's dairy-free."

As for the other ingredients involved? Ben & Jerry's explains that some of its dairy-free options will also include vegan brownies from Greyston Bakery in Yonkers, N.Y., where the company currently sources its non-vegan products. And in case you're concerned about any other dietary restrictions, Ben & Jerry's lists nutritional information for each of its new dairy-free flavors on its website.

That's great and all, but of course, taste is what matters most. According to Huffington Post, which got to try out the new flavors early, fans have nothing to worry about. The dairy-free version of Chunky Monkey was described as "indistinguishable" from its dairy-loaded counterpart, while other flavors tasted just as creamy and rich as you would hope, coming from Ben & Jerry's.

So, whether or not you're vegan, lactose-intolerant, or simply craving a sweet treat, it sounds like this might be a perfectly scrumptious option. Go ahead and take my money, Ben & Jerry's. Take all of it.