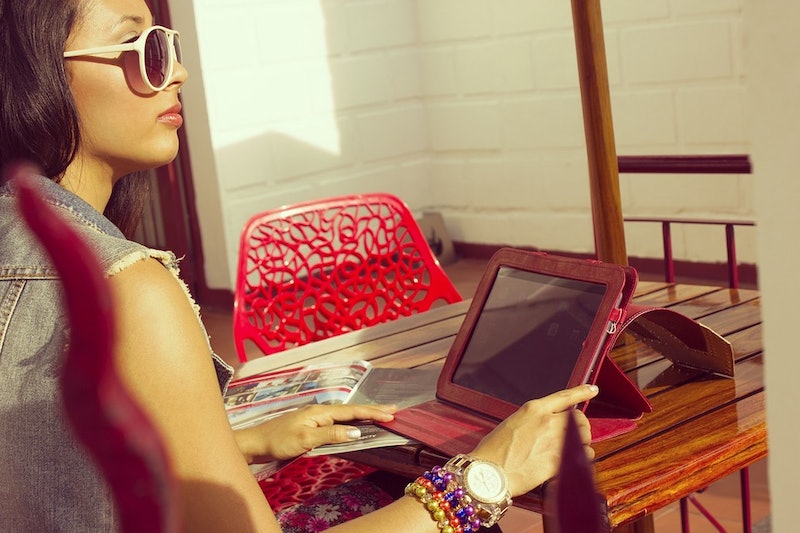 Something is happening to feminist conversations online in light of how common Internet backlash and abuse has become: Countless writers — many of them women — are taking feminist discussions to subscriber-only newsletters as a way to create safe spaces for the participants. The format of a subscriber-based newsletter offers a medium to cover feminist topics (and, indeed, pretty much anything else, too) without fear of the trolling and misogyny that often results from discussing them on public websites and forums. However, the move from websites to newsletters also has its downsides: It takes these important conversations and makes them private, despite the fact that having them out in public would raise more and much-needed awareness about the issues at hand. Indeed, the fact that so many feel the need to move the conversation away from the public eye in order to protect the participants might even be a subtle way in which women and allies are being silenced. Knowing what we know about the fight women have had to endure for equality, will newsletters ultimately help or hurt?

Upon first reading of these trending, subscription-based newsletters, I thought the idea was brilliant. Seeing the hateful comments on feminist articles brings so much sadness to my heart.

I wish so fervently that we had a community where these discussions took place amidst an atmosphere of acceptance and respect, whether or not we agree or disagree with each other. That space of respectful conversation is exactly what these newsletters have created. They're one way of finally drawing the line — of finally saying that enough is enough, and that women will no longer tolerate the kind of sexist, gendered abuse that runs rampant online.

And yes, it absolutely is abuse, whether it comes from men or women. Expressing an opinion is something that can be done without hate, violence, and bullying — and yet people often find it difficult to articulate their thoughts without hate or insult. Some even make it a point to be as hurtful as possible. Take this as an example: Harper's Bazaar recently published on article on Rita Ora's topless cover for the French magazine Lui. The following is a comment on their Facebook post about the article:

poor girl...showing her body so that she doesn't have to show her talent or brains... [sic]

Following this logic, nudity = stupidity and lack of talent. Got it.

These hateful comments get us nowhere, aside from reminding us that sexism and gender inequality are alive and very well. These words do not propel us forward in the argument of equal pay for equal work, freedom and safety in public breastfeeding, or the end to cruel and heartless body-shaming. All they do is ignite heated and cringe-worthy fights, hurt people, and silence voices which deserve to be heard. It's become acceptable in our culture to eschew thoughtful, well-executed conversations and instead opt for name-calling and finger-pointing of the worst kind — with women more frequently being the target of such abuse. In fact, 72.5 percent of the 3,787 people who reported being harassed online between 2010 and 2012 were women, according to the organization Working to Halt Online Abuse. In fact, women are such defined targets that a Twitter username coded as "feminine" has been found to receive, on average, 100 explicit or threatening messages each day, according to research from the University of Maryland. Meanwhile, usernames coded as "masculine" receive 3.7.

Writers like Amanda Hess have received online threats of being hunted down, raped, and killed — and what's more, it's a regular occurrence.

If you don't think women with opinions aren't cruelly attacked, just look at Nicole Arbour, a YouTube comedian who became famous for her highly controversial "Dear Fat People" video. Note: I am not a fan of Arbor's, because I find her comedy incredibly hurtful and demeaning. But even though I disagree with her, here is the thing: People who likely share similar opinions with me often respond to her like this:

You look stupid you rude f*cking c*nt. I'm praying for you to get a disease that will lower your metabolism and you get fat....then wtf are you guna do c*nt? Nobody like your rude humor. BOYS, like you cuz you hang your tits out in videos. The only girls on your side, yea GIRLS, are the ones with low IQs and nothing better to do with themselves. You have a collection of little boys and girls as fans. You'll do f*cking anything for a like you abusive f*cking wh*re. [sic]

This came in response to a generic Facebook status/photo that Arbour posted earlier in January. What kind of dialogue does this create? One of hate, judgment, and degradation — and that's if it creates a dialogue at all. Typically, words like this have only one goal: To silence the person to whom they're addressed. And that's not OK, no matter how vehemently you disagree with someone.

So, can we be surprised that women are finally peacing out and finding their own places to talk feminism? No, not at all. I myself very intentionally avoid commenting on publicly posted articles — because I know that even if my response is well-written to be inoffensive, someone will try to pick a fight with me.

But therein lies the problem: We are now avoiding these monumentally important conversations for fear of backlash. In doing that, we let the haters win. We also run the risk of shutting out allies from the conversation, and the importance of allies for the causes of marginalized groups cannot be underestimated.

While I think having the option to discuss these matters a bit more privately is wonderful (and necessary to have), I also believe that eliminating them from public view entirely is problematic. Maybe, then, what matters is not only that we create safe spaces in which to talk, but then take those discussions and bring them back into the fore in some ways. Consider, for instance, Lena Dunham and Jenni Konner's Lenny Letter.

While you can sign up to get the newsletter delivered to your email twice a week, Lenny Letter content is also syndicated, appearing regularly on Cosmopolitan's website. As such, the newsletter's function is twofold: Women can have feminist discussions privately without fear of backlash, while people who are interested in publicly discussing further also have the opportunity.

Whatever balance we may strike, I hope that we keep the conversation going. I hope that we move toward equality of all kinds. And I hope that our culture becomes not one of hate, but one of acceptance.