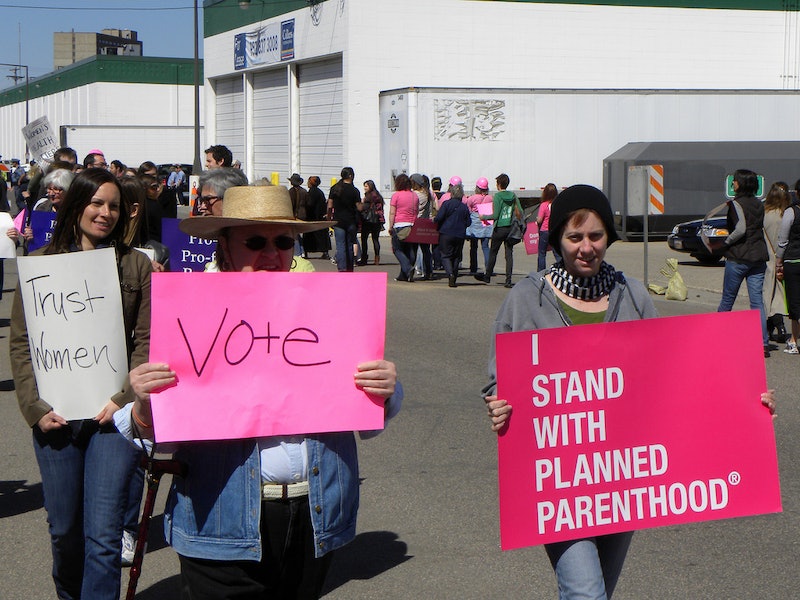 On Saturday, Sept. 26, writers Amelia Bonow and Lindy West launched the hashtag #ShoutYourAbortion in an effort to break down the stigma against abortion. With the current opposition against Planned Parenthood, the hashtag has added a huge number of voices to the ongoing fight for reproductive rights — voices which all deserve to be heard and listened to, voices which are every one of them important. Amidst the powerful stories reminding us exactly why access to safe, legal abortions is essential for women's health, though, there is also this: According to the Los Angeles Times, Amelia Bonow has been forced from her home due to death threats launched against her in the wake of the hashtag.

This is not the first time we have heard this story — woman speaks up, woman is threatened with grievous bodily harm, woman must hide in order to ensure her own safety — which is disheartening enough as it is. But what is even more disheartening is the common theme between Bonow's story and the many others we have heard about in recent years: Women receive rape and death threats online that are regularly, routinely so bad that they are forced to go into hiding to protect themselves. That this rarely happens to men is, perhaps, more telling about exactly how rampant misogyny is in our culture than anything else — and it is absolutely unacceptable.

This isn't to say that physical threats aren't directed at men at all. Indeed, a 2014 Pew Research Center study about online harassment found that, of the 44 percent of men and 37 percent of women in the United States who have experienced at least one form of online harassment, 10 percent of men had been physically threatened, while six percent of women had. But women, at nine percent, were more likely to be stalked — for men, the figure was six percent — as well as, at seven percent, more likely to be sexually harassed (four percent for men). Furthermore, when we consider just those between the ages of 18 and 24, women are significantly more likely to be on the receiving end of stalking and sexual harassment — 26 and 25 percent respectively for women, as opposed to seven and six percent for men — as well as more likely to experience sustained harassment (18 versus 16 percent).

And as the Good Men Project notes, the Pew study is not without its flaws, the biggest one perhaps being this: There's “a lot of overlap between categories like 'harassment for a sustained period' and 'stalking,' or 'offensive names' and 'purposeful embarrassment,' or 'sexual harassment' and 'physical threat'” for which it doesn't account. For women who speak up — about abortion, about women's rights, about sexism, about any number of things that largely white, straight, cis men might perceive as attacks on their privilege — rape and death threats often come in the same breath, tying the categories of “sexual harassment” and “physical threat” together in ways that the Pew study may not address.

Amanda Hess' January 2014 piece for Pacific Standard, “Why Women Aren't Welcome on the Internet,” remains one of the strongest examples showcasing this overlap in action. In addition to the rape and death threats she herself has received, she also describes “just a sampling of the noxious online commentary directed at other women in recent years”:

To Alyssa Royse, a sex and relationships blogger, for saying that she hated The Dark Knight: “you are clearly retarded, I hope someone shoots then rapes you.” To Kathy Sierra, a technology writer, for blogging about software, coding, and design: “i hope someone slits your throat and comes down your gob.” To Lindy West, [then] a writer at the women's website Jezebel [and co-creator of the #ShoutYourAbortion hashtag], for critiquing a comedian's rape joke: “I just want to rape her with a traffic cone.” To Rebecca Watson, an atheist commentator, for blogging about sexism in the skeptic community: “If I lived in Boston I'd put a bullet in your brain.” To Catherine Mayer, a journalist at Time magazine, for no particular reason: “A BOMB HAS BEEN PLACED OUTSIDE YOUR HOME. IT WILL GO OFF AT EXACTLY 10:47 PM ON A TIMER AND TRIGGER DESTROYING EVERYTHING.”

I would argue these comments speak for themselves, although if you need it in more concrete terms, artist Amy Davis Roth's installation “A Woman's Room Online” brought them and countless others into real, physical space last fall. By papering a room with the sort of abuse so frequently lobbed at women online, Roth made it crystal clear what it's like to be a woman online: We experience an overwhelming and disproportionate amount of violent, sexual threats, frequently for the simple “crime” of being women with voices.

During the height of GamerGate in 2014, we saw this trend commonly occurring. While some men who criticized GamerGate did suffer terrible attacks from supporters of it — web developer Israel Galvez was swatted, and Fez creator Phil Fish sold his studio and left the gaming industry after being doxxed — the bulk of the threats (and particularly those who have forced people from their homes) were directed at women. When former NFL player Chris Kluwe gave a blistering critique of GamerGate on Medium, he got what could be called “an earful” on Twitter, but did not, as Kirk Hamilton pointed out at Kotaku, have to worry about his safety; however, when actress, writer, and producer Felicia Day wrote that she was afraid of being targeted by GamerGate and urged us all to be kind to one another, she was immediately doxxed (something which Kluwe also noticed and called out). Grace Lynne, a former GamerGate supporter who became a critic later on, had her former residence swatted — even though she didn't even live there anymore, adding the current resident to the mix as collateral damage. Game developer Zoe Quinn has been driven from her home by death threats, as has fellow developer Brianna Wu. Feminist Frequency critic Anita Sarkeesian has, as well; additionally, in October of that year, an event at Utah State University Sarkeesian was scheduled to speak at was canceled after someone threatened a school shooting if she made her planned appearance. During this time, Sarkeesian commented that she has also appeared at three other events that drew bomb threats.

The pattern is easy to identify.

What frightens me the most about this trend is the frequency with which it occurs — because to me, what that says is that a disturbingly large number of people think that it is perfectly fine to express disagreement by threatening to rape, kill, or otherwise harm another human being. In the case of Amelia Bonow, it is all the more frightening because of what the threats are in response to: A woman refusing to let someone else dictate what happens to her body. No one should have to face threats of violence, sexual or otherwise, for expressing a point of view, and women in particular should not have to face them for taking ownership of their own bodies.

But we face danger for owning ourselves every day. We see it in street harassment — in the 84 percent of women worldwide who report experiencing it for the first time before the age of 17, in the people telling us to smile all the time, in the people who get up in our faces or verbally or physically attack us when we don't give them what they want. We see it in the opponents of reproductive rights, who refuse to allow women the choice to do with their own bodies what they will. We see it in rape culture, in those who say, “She was asking for it,” in those who victim-blame, in those who insist it is women's responsibility not to get assaulted, rather than the attacker's responsibility not to assault in the first place.

We see it in all these common occurrences, and in so many more. And again: It is unacceptable.

I will admit that I do not know what might be done to solve this problem. A paradigm shift is required — a massive one — and I know that, as is always the case with progress, it will likely be slow in coming. But amongst it all, Amelia Bonow teaches us what we should be doing: She is staying safe in the face of all those threats, yes — but she is not staying silent. She is continuing to speak, and in doing so, she encourages the rest of us to continue to speak up as well.

Because we can't afford not to.

More like this
Sandra Bullock, Girlboss Extraordinaire
By Matt Harkins & Viviana Olen
The 'Hocus Pocus' Sequel Finally Has A Release Date & It Makes Total Sense
By Shannon Barbour and Radhika Menon
10 Times Boris Johnson Got It Wrong On Trans Rights
By El Hunt and Sam Ramsden
Here’s What Sarah Jessica Parker’s Canned Cosmo *Actually* Tastes Like
By Emma Garza
Get Even More From Bustle — Sign Up For The Newsletter