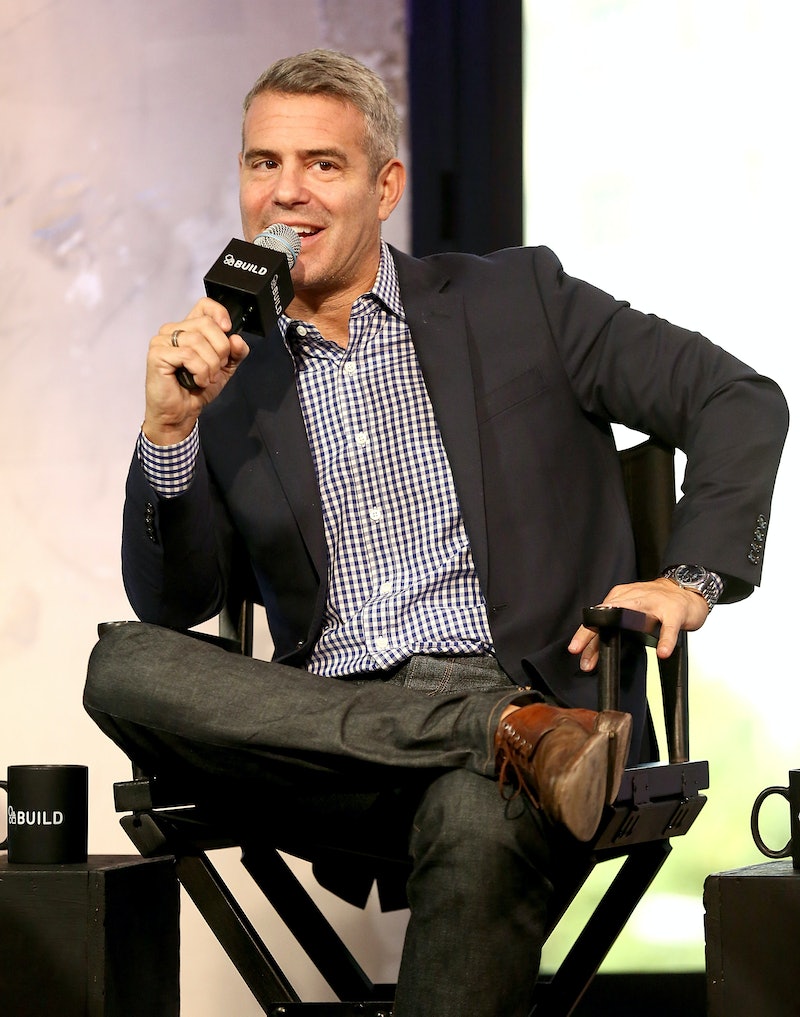 If I had to switch jobs (or lives) with anyone on the planet, I would definitely choose Andy Cohen. The dude is living out my wildest dreams as the host of Watch What Happens Live. He gets to talk to Real Housewives and other celebrities, drink cocktails, play fun games, and ask whatever questions pop into his head. It just really seems like the sickest job. I would even pay someone to let me do all that, instead of the other way around. So, how did Andy Cohen start hosting Watch What Happens Live? It might seem like he just went from hosting those Real Housewives reunions to being a talk show host overnight, but that's actually not what happened.

Cohen is more than just the face of the network; he has been a power player behind the scenes at Bravo for a long time. When the 47-year-old first got the opportunity to host his own talk show, he was moving from a behind-the-scenes role as Vice President of Original Programming and Development for the network, a positive which he'd held for four years. This meant that he had a heavy hand in the development and casting of the shows that really shaped what the Bravo network would become.

Here's some background on how Cohen ended up where he is today.

Why Was He Not On TV Sooner?

Cohen has such a dynamic personality that I'm pretty surprised he had a behind-the-scenes role to begin with, but it was a conscious choice. In a 2010 interview with New York Magazine , Cohen explained, "I originally wanted to be on-air, but then I was like, Screw this, I’m not moving to the middle of nowhere to be a reporter when I could have this cool life behind the scenes in New York.” And that is something that makes total sense to me: refusing to sacrifice your work/life balance.

How Did He Make The Leap To On-Air?

Cohen used to send emails to to Bravo's former president Lauren Zalaznick and she enjoyed his writing style so she asked him to start blogging for the network. Cohen explained it best in a New York Magazine interview when he said, “I was sending dishy reports from the set of a show, and she was like, ‘You have to start blogging for us.’ And then I started getting punditry gigs, and they saw I could string together a sentence.” So, once it was clear that he was well spoken and could hold his own, he started hosting the Real Housewives reunion shows.

How Did He Get His Own Talk Show?

It was only logical for Cohen to get his own talk show after hosting those crazy reunion shows. He had a great rapport with all of the women and was able to get them to reveal information with ease. Plus, he had such a great personality. To top it all off, if you were watching those shows from the very start you have to remember him ending every reunion with the phrase "watch what happens" and that just set itself up to be the perfect talk show title.

Yes, Andy Cohen has the coolest job on the planet, but it took a lot of hard work behind-the-scenes to get there. And now, he is becoming as much of a pop culture icon as the celebrities he interviews!