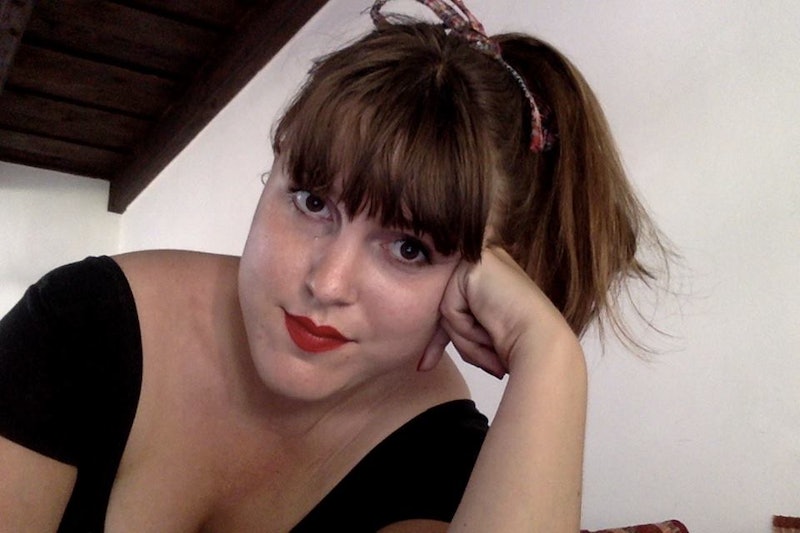 You know how when you’re gassy it can sometimes feel like a sharp pain in your belly? Well, that’s more or less what an ovarian cyst feels like at first. Mine was just a small pain on the lower left hand side of my abdomen, uncomfortable but not really interfering with my daily life. I pretty much ignored it until I the first time I had an orgasm that hurt . Like, serious pleasure and then serious pain — and not in a fun way. I thought maybe I’d bruised or scratched my cervix somehow but when that pain didn’t dissipate either, my boyfriend finally convinced me to go the doctor.

The doc confirmed what I’d already started to suspect: There’s a cyst growing on my left ovary. What he also told me after an ultrasound is that it’s “4.5 cm by 4.3 cm or about the size of a tangerine,” which freaked me out more than anything else about this whole situation. A tangerine?? That’s massive! (Then I remembered that I live in Vietnam and maybe he was actually talking about a kumquat, which is much more reasonable. I seriously hope he was talking about a kumquat. Please, please let him have been talking about a kumquat.)

While I was relieved to know exactly what was causing the pain (pro-tip: don’t Google medical problems because the results will only freak you out), the doctor couldn’t actually do anything about it. He told me to go home, take an anti-inflammatory for pain, and come back in six weeks for a follow-up. I left the office somehow feeling simultaneously relieved and also more nervous than before. What were the next six weeks going to look like? Would I not be able to have pain-free sex for a while? What if it ruptured?

I’m not the kind of person who does well with ambiguous situations, be they vague relationships or medical diagnoses that don’t come with any clear outcome. As a result, I’ve basically spent the two months since seeing the doctor obsessing over even the smallest change on my ovary. The slightest twinge has me laser-focusing my attention to that part of my body — a part that I don’t usually think about, to be honest — and wishing I had an at-home ultrasound to track the damn thing myself. I’ve dealt with spotting around ovulation, having to pee all the damn time, and yes, some pain with sex still sometimes. It’s annoying and frustrating and also, apparently, super common.

Most women have had cysts at some point during their fertile years and don’t even know it. According to WomensHealth.gov, there are two types of cysts that are most common: follicle cysts and corpus luteum cysts. During a normal menstrual cycle, eggs form inside a sac called a follicle in our ovaries. When we ovulate, the egg is released from the follicle. But sometimes the egg doesn’t release and the follicle keeps growing, forming a follicle cyst. The other type, corpus luteum cysts, form when the follicle sac reseals itself instead of shrinking and fills up with fluid. It’s kind of a like a zit on your ovary, which is totally gross but the best way I’ve found to describe it. The second type is probably the type I have, as they can grow to be as big as four inches (tangerine sized, now that I think about it) and can also cause pain when they twist or rupture.

And the thing I’m most worried about is it rupturing, because I’ve already been there and done that. When I was 13, I was sitting at my desk in geometry class until all of a sudden I was curled up under my desk in fetal position, in so much pain that I didn’t even think it was weird that I was on the floor. I staggered to the nurse’s office with the help of a very freaked out friend and when my mom came to get me, I had to have her pull the car over so I could throw up. I’d never been in so much pain in my life and had no idea what had happened until the doctor told me I’d just experienced the joy of a ruptured ovarian cyst.

I went on hormonal birth control two years later, which protects against cysts because you don’t ovulate on the Pill, and I was cyst-free through the rest of my teens and early twenties. However, when I decided to ditch the Pill five years ago, I knew that I was risking getting a cyst again it was a risk I was willing to take. And, well, that situation has now come to pass.

So what am I going to do about this weird growth inside me? Nothing, really, other than continue to obsess that maybe the doctor was wrong and it really is one of those cysts that grow teeth and hair. (Real thing. Look it up and get ready for nightmares.) I’m going to keep paying attention, keep feeling nervous about a rupture, and I’ll probably get it checked by the doctor again soon. And if you’re experiencing any of these symptoms? Definitely make sure you go and checked out by a doctor too.