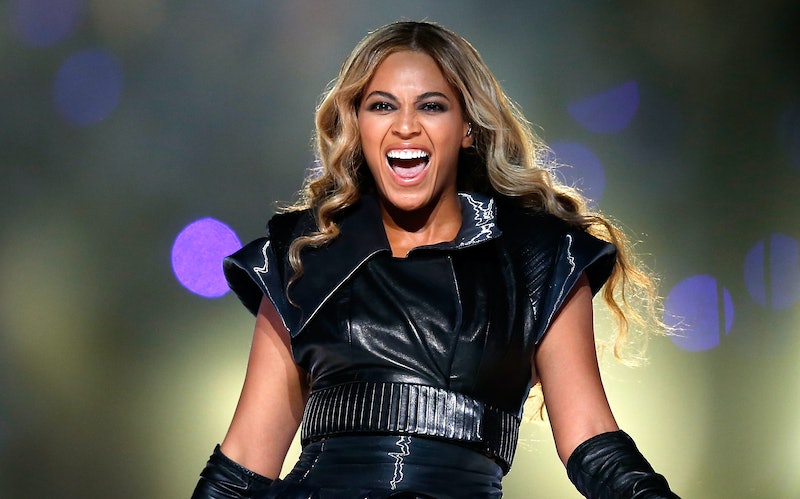 I've never been so excited to watch a football game in my entire life: Rumor has it Beyoncé will perform two new songs during the upcoming Super Bowl 50 halftime show on Sun., Feb. 7. Sound too good to be true? Well, frankly, it might be! At this time, it's just a rumor... but wouldn't it be wonderful if it were true? Beyoncé has put out several tunes since the surprise premiere of her last studio album in December 2013 ("7/11," "Ring Off," "Feeling Myself" with Nicki Minaj, etc.), but understandably, fans are thirsty for more. With rumors that her next LP is already finished AND that a new single called "Formation" is on the way, this latest Beyoncé Super Bowl buzz doesn't seem outside the realm of possibility. So, where did this gossip come from?

On Wednesday night, The Beyhive, a well-known Beyoncé fan site, revealed the 34-year-old superstar's alleged plans to debut two new tracks at the Super Bowl on Twitter. Subsequent tweets from their account make it seem as though the information came from a recent halftime show rehearsal. The Beyhive promised to bring the Internet more exclusive details on Thursday, so we'll see what happens. Check out the tantalizing tweets below.

Naturally, fans are FREAKING OUT about the possibility of Beyoncé blessing the world with new material on Sunday evening:

And the #FEBEYUARY hashtag is slowly but surely spreading across Twitter:

Technically speaking, Coldplay is headlining the Super Bowl 50 halftime show... but somehow, Beyoncé has managed to steal the spotlight from the band before she's even taken the stage! I suppose that's just what happens when you're one of the best live performers in the biz! Poor Coldplay, though. Hey, at least the group's new single "Hymn for the Weekend" (which features Bey) should get a nice sales boost from the show! Otherwise, I think it's safe to say that Sunday night is going to be all about King B.