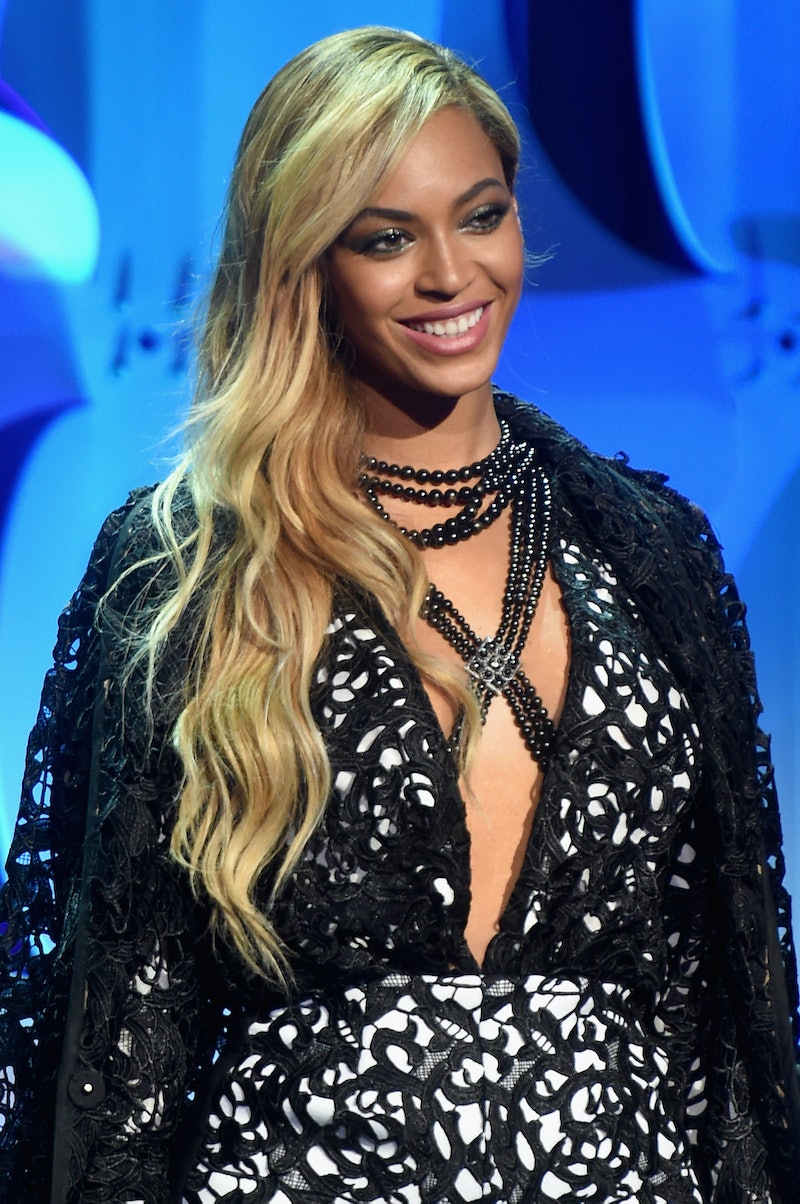 With her set at the Super Bowl 50 halftime show just around the corner, the Internet is lighting up with speculation that Beyoncé is releasing new music soon. Admittedly, the Internet is almost constantly speculating that Beyoncé is releasing new music soon, but this time, there's seems to be some legitimately compelling evidence! Though the 34-year-old star has yet to confirm anything, Idolator reports there are rumors that Beyoncé's new single is called "Formation." So, how did this rumor get started? (Side note: Is Bey going to try to make "formation" the new "squad"? Place your bets.)

As Idolator's Mike Wass explains, The Beyhive does NOT mess around when it comes to Internet sleuthing, so if there are details about their idol's new music online, rest assured, they will find them. According to Beyoncé fan site The Beyhive, Twitter user @whatthekasim allegedly tweeted on Jan. 31 that their dad "shot two new Beyoncé videos" recently — and one of them was for a song called "Formation." Fascinating...

Of course, this info hasn't been verified, but it's worth mentioning that Taylor Swift's fans found out that she was filming the "Blank Space" video because someone posted that their dad was helping with the shoot on Twitter. Just sayin'. (Let's face it, dads are doing all sorts of cool stuff these days!) Check out @whatthekasim's alleged tweets below.

Now, The Hive was on the case. Soon, someone discovered that "Formation" may have originally been on the setlist for Beyoncé's 2015 Made In America concert (though, obviously, it didn't make the final cut).

The plot thickens! So, is this "Formation" stuff legit? Unfortunately, we don't know yet. But, there are a few other clues that point to Bey putting out new music soon. For example, she's performing at the Super Bowl 50 halftime show with Coldplay on Sun., Feb. 7, which would be a great opportunity for her to debut something new. Though halftime show setlists tend to favor crowd-pleasing favorites over new songs, Beyoncé is in a unique position here, because she just did this gig three years ago. Therefore, I wouldn't be surprised if she felt as though she had to do something extra special this time around (like perform a new single, for instance).

Also, Beyoncé purportedly shot a music video in Los Angeles at the end of January (and she may have shot another one in August or September 2015, as well). Finally, according to an alleged tweet from Boots — one of the main producers of Bey's 2013 self-titled LP — her new project could be close to completion. (ICYMI: Fans have nicknamed her forthcoming effort "B6" because it will be her sixth studio album.)

Yes, it definitely seems like Beyoncé is up to something... but she's notoriously sneaky and secretive (and she loves to keep her fans guessing), so this could easily be another false alarm. Still, if I were you, I'd be sure to tune into the Super Bowl 50 halftime show on Sun., Feb. 7 anyway. You know, just in case. Even if King B doesn't give us a new single, you know she'll shut it down.