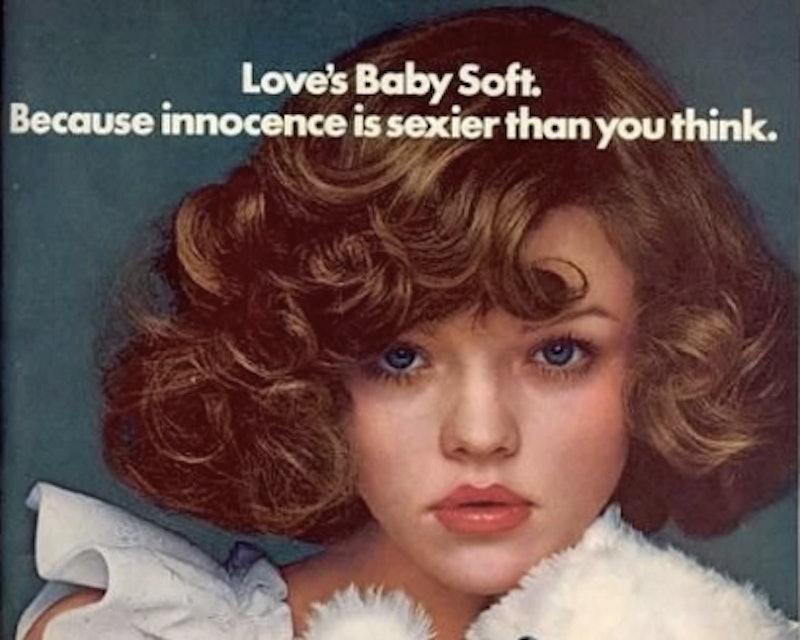 It's not a secret that ads are around in order to push products. But what's interesting is that oftentimes, we find the male gaze in ads that are trying to move merchandise for women. Whereas male-skewed ads usually revolve around becoming more "masculine" or feeling proud of the type of person you are, women have a long history of getting told what complexes to develop in order to appear more appealing to their male counterparts.

Ads regularly work on our emotions, our dreams, worries, and fears in order to make creams and clothes, blow dryers and beauty products appealing. And throughout history, it just so happens that women's main concern has (apparently) been how to snag a beau and be deemed beautiful by the snagged. And ads have been only too willing to encourage them.

From how to melt away double chins to how to balance out pear-shaped bottoms, or how to come across as innocent while still giving off a wildly wanton vibe, ads often teach women how to make themselves "more appealing" to the ever-present male gaze in our society, both past and present. And what's fascinating is that no matter whether nearly a hundred years have passed, we're still seeing the same themes, just with new language. Below are 11 examples in which ads have suggested what women should do for the male gaze.

1. Stay Delicate For The Fellars

This 1920s ad suggests that you need to veer away from seeming "indelicate" in order to be seen as attractive, and indelicate, in this case, happens to mean stinky. While many of us are still big advocates for keeping our B.O. in check in 2016, the fact that Amolin stressed phrases like, "Society won't stand for indelicate women," suggests more of a matter of staying conventionally desirable, feminine, and delicate rather than keeping your armpits mildly inoffensive.

2. Gain Curves So Men Will Notice You

If you didn't believe that ads make up problems for women just to push products, here's your Exhibit A: One moment, we're told to wash away our flabby arms like magic, and the next we're told that to be skinny is to be friendless, and that pounds are "beauty-bringing." So in this 1930s advert, a woman learns that to get a date, she needs to round out in order to be asked out for milkshakes on a Friday night.

3. Give Him That "Natural" Look He's After

Do you want to "catch the eye and win the heart" of a particular boy in class? Then you better wipe away your sister's harlot-esque red lipstick, because there's been a serious poll and the poll has said that boys everywhere prefer a girl who looks natural, by a landslide. According to this 1940s ad, a guy looking for a beau wants someone who's "sweet-enough-to-treat" with her naturally rosy cheeks and tinted lashes. Which means if you're one of the ladies who likes to play with a good coal pencil or go a little heavy with the rouge, you're not what men are looking for.

4. Watch Your Morning Breath Or He'll Leave You

Even if you're the most glamorous, Marilyn Monroe-esque girl in the whole town, your man will leave you for a babe below your level if you don't keep your breath smelling right. Maybe a friendly PSA about keeping your coffee breath under control isn't such a bad thing, but saying the love of your life will leave you unless he smells hints of mint? Not so much.

If you were living in the 1950s and noticed that your husband had stopped paying attention to you and begun stepping out alone during the evenings, chances were it was because of your skin. In this ad, the wife confides in her mother saying, "He never takes me out anymore! I sometimes think he's ashamed of me!" To which the mother promptly replies (without missing a beat), "Do you think it could be your complexion?"

Probs. That's probs it. And once poor Mell used Palmolive, Bob's so proud of her again. So the lesson from this one? If you want to keep your husband interested, don't let time touch you. With the help of soap!

In the 1950s, fashion didn't seem to reach the pinnacle of "dressing up because I like it," so women took cues from ads about how to attract men with their silhouettes and hem lengths. In this Suncraft one, the whole point is choosing the proper shirt to make him fall head over heels. The copy reads, "Aimed right at his heart (as his response Will Tell!)."

That means if you'd like to attract the attention of a man, you needed to stock up on a couple of these wash-in-a-wink shirts.

7. Don't Embarrass Your Husband With Runs In Your Stockings

If you wanted to keep the pride of your husband, then I hope you weren't even thinking about walking around the house with a run in your stockings. With copy like, "Husbands admire wives who keep their stockings perfect," this ad implies that anything less will make your partner lose interest in you. Because that's all it took to crumble a marriage in the '50s, apparently.

8. If You Stay Innocent Like A 4-Year-Old Baby, Then You Will Stay Timelessly Sexy

From perfume bottles to lotion tubes, Love Cosmetics tried to convince the female demographic of the 1970s that to be seen as desirable, they all needed to pull a Lolita. It sort of goes hand in hand with the imagery of the "indelicate woman" of the 1920s. In order to be seen as attractive, you needed to give off this frail, childlike, innocent vibe to complement the macho personality of the dude. So grab a teddy bear and channel your best impression of your Pre-K self.

9. But You Also Have To Channel Your Inner Fabio

Then, to keep women on their toes, it was also suggested that they be sophisticated and talented and topless. In this 1970s Tiparillo Cigarette ad, the copy goes over what would happen if a man offered a square to a violinist.

It's aimed toward the male audience, but it gives women a peek behind the curtain, so to speak, as to what a guy is hoping for when he interacts with them. She's got to be sophisticated — hanging out with "the Beethoven crowd" — but she's also open minded, which explains why she'd be willing to try a cigarette and play with her shirt open. As all the accomplished violinists do.

You would think that this is just another one of your run-of-the-mill '50s ads, but this is actually a Bic Soleil razors ad that ran in 2010. Here we see a woman grocery shopping and buying cakes in heels that Louboutin himself would approve of, with the simple message of: "Have legs that beckon."

As you can imagine, the advert didn't go over well with its female audience. According to AdWeek, it was quickly pulled from Toronto's subway stations after "an outcry from those who say it portrays women as nothing but sexual objects." Instead of selling razors, the brand took a misstep and tried to sell the male gaze in the form of smooth legs.

11. American Apparel Teaching Us That We Can Sexualize Anything If We Try Hard Enough

Whether through its sweatshirts or tube socks, if there's one thing that American Apparel teaches us regularly, it's that we can turn anything into foreplay if we only put our minds to it. Can you guess what this ad is selling? Shoes. That's right, shoes. This is AA's 2011 shoe campaign, but from the context of the images you might think that the brand was trying to sell you more of an idea than a product. If you wear its items, men won't be able to keep their hands off of you.

With everything from the suggestive positions to the flash of butt cheeks, we're being sold sex in the most blunt of manners. And if you want to be sexy for the male gaze, this is apparently how you do it. By wearing moccasins.

Whether we're in 2015 and being offered how to look while soaking up rays, or in 1940 and being taught that our natural blush is what will attract the fellas, one thing that's stayed consistent is that ads often aim to teach us how to best present ourselves to the male gaze in order to sell their products. Whether that product is a slipper shoe or face powder, women are constantly sold how to be more appealing to those who watch them. Now the question to ask is: Why do we keep falling for it?

More like this
23 Times Meghan Markle Dressed Just Like Princess Diana
By Bustle UK
I Have Eyebrow Alopecia – & Microblading Gave Me My Confidence Back
By Jessica Morgan
42 Black Owned Fashion & Beauty Brands To Support Today & Always
By Mekita Rivas, Shea Simmons, Kui Mwai and Dominique Norman
Tory Burch Wants To Uplift Other Ambitious Women
By Allie Fasanella
Get Even More From Bustle — Sign Up For The Newsletter