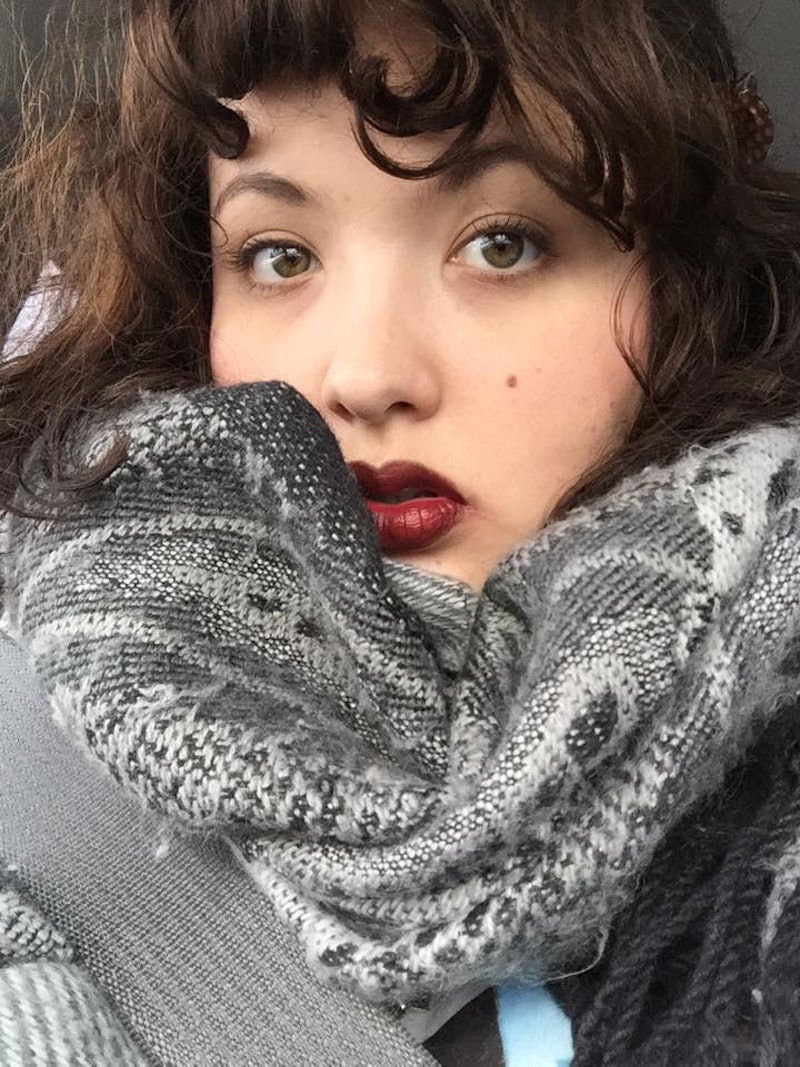 I take out my compact, and begin powdering my face. I line my lips in the imperfect way I cannot seem to improve upon regardless of almost daily practice. I swipe on my red lipstick and a bit of blush. I fill in my eyebrows, cursing my mom for plucking them so thinly when I was 13, before remembering that's what I asked her to do. I finish things off with mascara — the kind that gives my short, choppy lashes the illusion of fullness. I check to make sure my curls are voluminous, not flat. I'm ready to go; beauty routine complete.

It's a series of events that plays out similarly almost every day. Except on the ones when I cannot help but ask myself, why am I doing this? Who am I doing this for?

As a kid, I watched my mom put on makeup like clockwork before 7 AM each morning. She never sat me down and taught me how to put on lipstick or eyeliner. But in watching her, I learned nonetheless. She'd later tell me that makeup makes her feel more beautiful; more ladylike or approachable or feminine or pleasing to the eyes. But she'd also tell me it makes her feel ready for the day. If not empowered, then at least a little bit more prepared.

As for me, I had no interest in red lips or rosy cheeks for a while. By the time I was old enough to be granted permission to wear makeup, it was black eyeliner, black mascara, and black nail polish that appealed to me. These things were symbolic of all those Ramones and MCR songs in my Second Generation iPod Nano; of the anxieties I was navigating, particularly in regards to coming to terms with having a non hetero sexuality in a town where that often got people hurt. But they were probably also a rebellion against my mom and the other women in the family, most of who'd grown up in Colombia and exercised quite traditional beliefs; whose beauty routines I equated to conforming to the man... Before I really knew what those words meant.

Yet with the exception of these years, when I was performing beauty in a way specifically chosen for its alternative qualities, the routines I've since experimented with have led me to question my motives.

In an essay for Matter called "Beauty Is Broken," Arabelle Sicardi analyzed beauty's past and present as a "man's possession," arguing that white men "legislate beauty's boundaries ... They define it; they dictate; they own it, asking us to see ourselves in their eyes." They works through a historical account of what we might now call the beauty industry; one sprinkled with philosophers and kings who have supported and perpetuated Plautus' famous line, "A woman without paint is like food without salt.” And it's because of this intrinsic, irrevocable link between the male gaze and the beauty industry that it's become almost impossible to distinguish between our own aesthetic preferences and those we carry out because we've grown up in a world that seems to like us more when we put on a face.

However, Bustle's own Georgina Jones believes that as women or feminine individuals, we "can weaponize femininity-focused constructs of beauty and reclaim them for ourselves," and I would have to agree. In the case of Jones, she was speaking about acrylic nails and the pressure placed on women to have perfectly-manicured tips. To her, acrylics are a way of exaggerating a beauty construct for purposes of reclamation. It's a kind of, "You want me to have perfect nails? I'll show you perfect nails," situation. And perhaps the same can be true of other forms of beauty.

Take, for instance, alternative beauty: People who fearlessly use beauty in a way that is subversive. Think women who walk out in green or blue lipstick, with peacock or pastel hair, with facial piercings or something otherwise striking and unapologetically unique from "the beauty ideal." To say such women are conforming to beauty standards or patriarchal values seems almost laughable. There is no beauty standard that calls for women to wear black lipstick or dye their hair an unnatural color; so performing such alternative beauty ends up feeling like an opposition. As writer Meg Zulch tells me on Twitter, "I perform weirder/more queer beauty. I feel empowered by that and don't feel that it necessarily appeals to cis men. In my experience, if it's non-traditional, queer, or risky, it's not for the male gaze." For Zulch, it's in the moments they abandon more classically-defined femininity in exchange for a queerer, more masculine, androgynous, or otherwise non-aspirational aesthetic that they feel most empowered by their routine. "It's a huge rebellion against patriarchal beauty values," they tell me.

Alternative beauty is just that: An alternative narrative. And it can apply to all the ways we present ourselves to the world, not just through makeup. As writer Ushshi Rahman noted in her blog post "On Uniforms," "I grew up fat and weird in a country where that was a significant, noticeable deviation from the norm," later adding, "All I knew was that as a young girl, wearing pants and not covering my tits with an orna got me in trouble and pissed people off: That was reason enough [to do these things]." In this post, Rahman discussed uniformity of various degrees — from school uniforms to social uniforms to the uniforms we ultimately create for ourselves. When she writes of wearing pants or tops that expose her boobs, she writes of opposing expectations. And that's a power our routines — be they sartorial or beauty — can have. Alternative beauty really can piss people off. That gives it purpose and meaning enough. That disconnects it from the male gaze and beauty standards enough. And yes, perhaps not everyone who performs alternative beauty wants to dismantle patriarchy; but sometimes our choices have political consequences regardless of intention.

But where does that leave more conventional beauty? Where does it leave someone like me whose beauty routine largely consists of red lipstick and flushed cheeks? Sure, I have blue and purple lipstick in my arsenal, but I'd be lying if I said that putting on a more Marilyn-esque face each day isn't the thing that makes me feel more empowered. Meg Zulch tells me, "For people assigned female at birth, it's very hard to remove that systemic oppression from thinking/routines." At the end of the day, however, I know I'm not striving to appeal to cis men with my beauty — because I feel it.

Part of distinguishing between the two for me has come from teaching myself how to be comfortable sans makeup. Through college, I cannot remember a time when I would've been willing to step out into the world without, at least, some eyeliner on. And I distinctly recall the first few weeks I spent with my partner four years ago, when I'd sneak off to the bathroom after having sex to make sure my foundation hadn't melted off. To be accepted, to be beautiful, to be hirable, to be fuckable, to many, means presenting femininely; and presenting femininely in my eyes meant looking more or less like a pinup girl: Made-up and put-together, but not too made-up or put-together. And certainly not so made-up and put-together that one might appear "trashy." So, to separate myself from the patriarchal ties between beauty and I, I began forcing myself to go out into the world and carry out my day without — even if only once in a while — to grow more comfortable in my skin as it is naturally.

Truthfully, it's helped. The more time I've spent with my body and my face as they are naturally, the more I've grown to understand that beauty isn't definable. Now there are days when I wake up, and I don't feel like I need makeup. Or maybe I just can't be bothered. There are also times when going without makeup that I catch myself feeling insecure. Not only "less beautiful," but less — perhaps ironically — myself. Maybe sometimes such insecurities are briefly about paranoia that those around me find me less appealing. But I think more often than not, they're about finding myself less appealing.

In conversation with designer Carrie Hammer, she tells me, "Sometimes we ignore our own definition of beauty to lean into society’s definition of beauty," and I think this is true for many of us, at least at some point in our lives. These days, however, I can't help but feel that my definition of beauty overlaps with society's in some ways — like red lipstick á la Taylor Swift — but not others. That's why when I take a long, hard look at those extra 10 minutes I need in the morning to put on my face, and ask myself whether I'd prefer to sleep in that little bit more instead, the answer is no.

In the same Matter piece, Sicardi went on to write:

"Beauty is failing us, because gender already has. But what keeps me coming back to it is that I still think it can be recovered. I think beauty can mean more than what it was ever meant to, that it can illuminate parts of people they didn’t know they had or deserved or even wanted."

I think it can be recovered as well. I think many people have already done so. And while I also think it's nearly impossible to know with absolute certainty how much the male gaze or social acceptability factor into your routine (and, like Sicardi noted, "I’m going to die before patriarchy is over," so it'll likely remain pretty impossible), I think what is possible is knowing whether you're enjoying the process. If you're not, that's likely a sign that the beauty routine you're performing isn't yours. But if you are, then huge props for crafting for yourself a means to empowerment out of an industry whose history was meant to disempower.