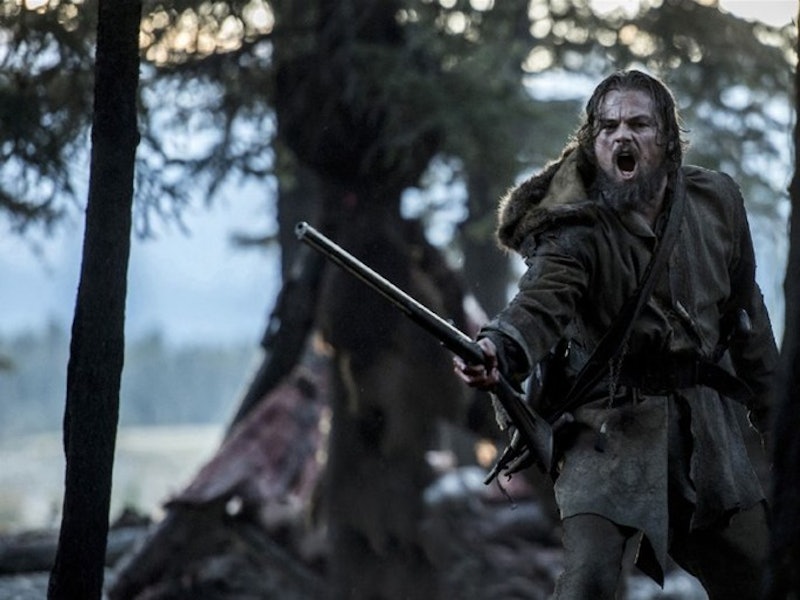 This year marks the 88th Academy Awards, and the question on everyone's mind is, will Leonardo DiCaprio finally go home a winner? If you're rooting for DiCaprio to get his hands on the gold statue that has alluded him for years, and you hope The Revenant wins Best Picture, then you'll definitely want to read these books that have the same action, adventure, and gut-wrenching emotion as your favorite 2015 film.

A big winner at the Golden Globes, the SAG Awards, and the Critic's Choice Awards, The Revenant leads this year's nominations at the Academy Awards with 12 nods, including Alejandro G. Iñárritu for Best Director, Tom Hardy for Best Actor in a Supporting Role, and, of course, Leonardo DiCaprio for Best Actor in a Leading Role.

The film, which was based off of Michael Punke's novel by the same name about real-life frontiersman Hugh Glass, is an epic story of betrayal, survival, and sweet, sweet revenge. A powerful, evocative movie, it isn't surprising that The Revanant is among the top contenders at this year's award ceremonies. But will it take home the big prize at the Academy Awards February 28? We can only hope, for Leo's sake.

If you're crossing your fingers and hoping The Revenant wins Best Picture, here are 11 books you'll love to read. Who knows, maybe one of these is a future Oscar-winning screenplay just waiting to be adapted.

1. The Revenant: A Novel of Revenge by Michael Punke

This one should be a given. If you loved The Revenant movie, you have to read the book it was based off of. A fictional account of the real life of fronteirsman Hugh Glass, Michael Punke's novel of revenge has all the emotion, all the suspense, and all the rich detail that makes the movie so good. Besides, everyone knows the book is always better than the movie.

2. The Orenda by Joseph Boyden

Watching The Revenant, the beautiful yet unforgiving landscape grabs your attention, and the human story told in it pulls you in even further. Joseph Boyden's The Orenda has the same qualities. Set in a remote, brutal cold landscape, Boyden's novel is the account of violent conflict between warring tribes, and the foreign missionary who finds himself caught up in the middle of it. Captivating and compelling,fans of The Revenant will love The Orenda.

Though set in a later time period than The Revenant, Ron Rash's Serena has the same dark and gritty feel as the hopeful Oscar winner. A violent story about love, jealousy, and power, Rash's novel, which was adapted into a movie in 2014 starring Jennifer Lawrence and Bradley Cooper, is an intense and poetic read worthy of both reading and watching.

A violent novel whose graphic descriptions will make you squirm as much as that bear scene in The Revenant, Cormac McCarthy's Blood Meridian is an epic story of America's expansion to the west. Using historical events in the 1850s as his inspiration, McCarthy has created a bloody, action-packed novel about a young teenage member of the Glanton gang, a group of scalp hunters. Vivid and unapologetic, this is not a read for the faint of heart.

Leonardo DiCaprio was a father on a mission for revenge in The Revenant, but parents aren't the only one with a thirst for vengence. It's the daughter, 14-year-old Mattie Ross, in Charles Portis's True Grit, who sets out one winter in the 1870s to track down the man who murdered her father and exact her own revenge. Another book that was given a great film adaptation, True Grit should be read and watched by all fans of The Revenant.

The Revenant isn't the only book about the legendary Hugh Glass. John Myers Myers's The Saga of Hugh Glass tells the story of the man's life before the events in the film, when he was captured first by buccaneer Jean Lafitte and later the Pawnee Indians. If you thought the revenge story was interesting, just wait until you read his earlier exploits. You'll be hoping for a prequel to The Revenant.

7. The Girl Who Loved Tom Gordon by Stephen King

While recovering from his injuries and fighting his way back to safety, Hugh Glass had visions of his past, including his son and his wife. If that aspect of the story interested you, then you will be fascinated with Stephen King's The Girl Who Loved Tom Gordon, a terrifying novel about a 9-year-old girl lost in the woods who has hallucinations of her favorite baseball player as she struggles through the deep, dark woods trying to find her family.

8. Into the Wild by Jon Krakauer

True stories about wilderness survival, like the one of Hugh Glass, are even more compelling than fictional ones. Jon Krakauer's Into the Wild is the true account of Christopher Johnson McCandless, a college graduate who gave all his money away, abandoned his car, and traveled to Alaska where he was determined to live alone in the wilderness. Moving and heartbreaking, Into the Wild is a must-read for anyone who enjoys true stories of survival.

What is it with Westerns and revenge, anyways? In Paradise Sky, African-American cowboy Nat Love seeks to exact his own revenge on the men that took away his love, his family, his life, and that tried, and failed, to take his freedom away from him. A spirited and ultimately fun novel, Paradise Sky is a light read next to the blood-and-guts of The Revenant, but a phenomenal story of survival and revenge all the same.

One of the things that makes The Revenant such an interesting story is its historical setting. For a young country, the United States has had a violent and complicated history, one that is brilliantly brought to life by Norman Lock's American Meteor. An enthralling coming-of-age story that also follows the tale of Manifest Destiny, American Meteor makes history as interesting the the year's biggest blockbusters.

11. The Count of Monte Cristo by Alexandre Dumas