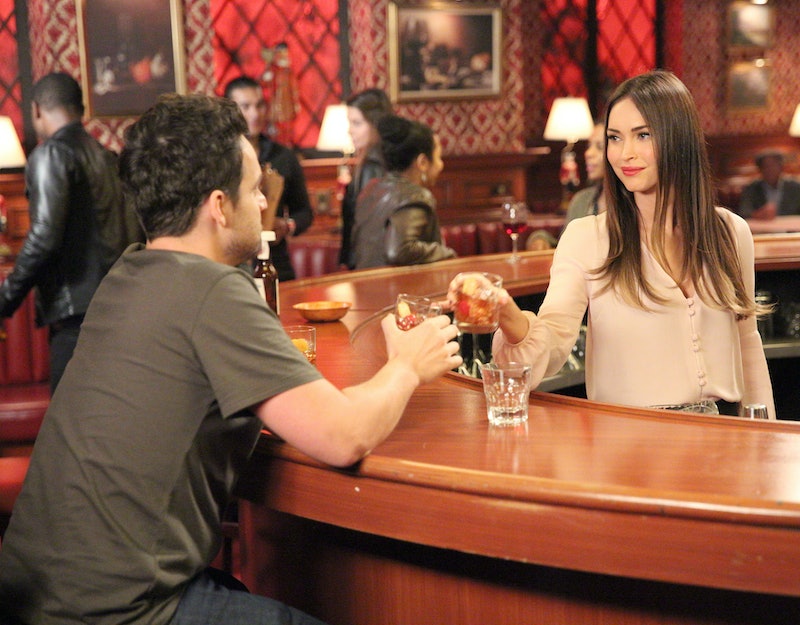 While Jess is away, Nick will play... or maybe even fall in love? Megan Fox made her New Girl debut as Reagan, a sexy pharmaceutical sales rep, during Tuesday night's episode and it was clear right from the start that Nick is going to fall for her. Hard. It all started when Nick and Winston made an agreement to stop waiting for the magic/perfect girl to come along. So naturally, that's when Reagan appeared in front of them and needed a place to stay — a request that Nick was more than happy to oblige. And while the romantic interest seems to be just one-sided (for now), that could quickly change and eventually lead to a Nick and Reagan hook up on New Girl , which is something I doubt Nick and Jess 'shippers are eager to see come to fruition.

It's not as though we haven't seen Nick date other women in the aftermath of his break up with Jess. But it's never had us worried because it was so easy to convince ourselves that he'd never like anyone as much as he liked Jess. However, the way he was looking at Reagan throughout the entire episode shakes the very foundation of that belief. It's not just the fact that she's gorgeous, though, that definitely played a major part in the initial attraction. But he also seems to just like her own independent, sassy demeanor. She can even make a perfect Old Fashioned. So basically, she's Nick's dream girl and I'm worried that this could lead to Jess feeling out in the cold when she returns.

Reagan says that she only needs a place to stay for a month, but a lot can happen over the course of 30 days and given the way she immediately gelded with all the loftmates, she may want to turn this into a more permanent arrangement. Of course, I'm not saying they'd just let her have Jess' room forever, but it was hard not to feel a pang of worry (and utter sadness) when Nick was so willing to get rid of all of Jess' personal belongings on Reagan's command.

I hate to think of her feeling replaced in any way and I certainly don't want to give up on the possibility that Jess and Nick will eventually find their way back to each other. So let's just hope that this new girl doesn't end up overstaying her welcome. But in the meantime, prepare yourselves for this to take a romantic turn...

More like this
Nicole & Chris Hinted They’re Still Together After 'Married At First Sight'
By Brad Witter
Kylie Jenner Clarified How To Pronounce Her Son's New Name
By Jake Viswanath
'Bachelor' Star Cassie Randolph’s Sister Is In The 'Yellowstone' Spinoff '1923'
By Grace Wehniainen
'RHOP' Stars Robyn & Juan Reportedly Got Remarried & Filmed The Ceremony
By Brad Witter
Get Even More From Bustle — Sign Up For The Newsletter
From hair trends to relationship advice, our daily newsletter has everything you need to sound like a person who’s on TikTok, even if you aren’t.