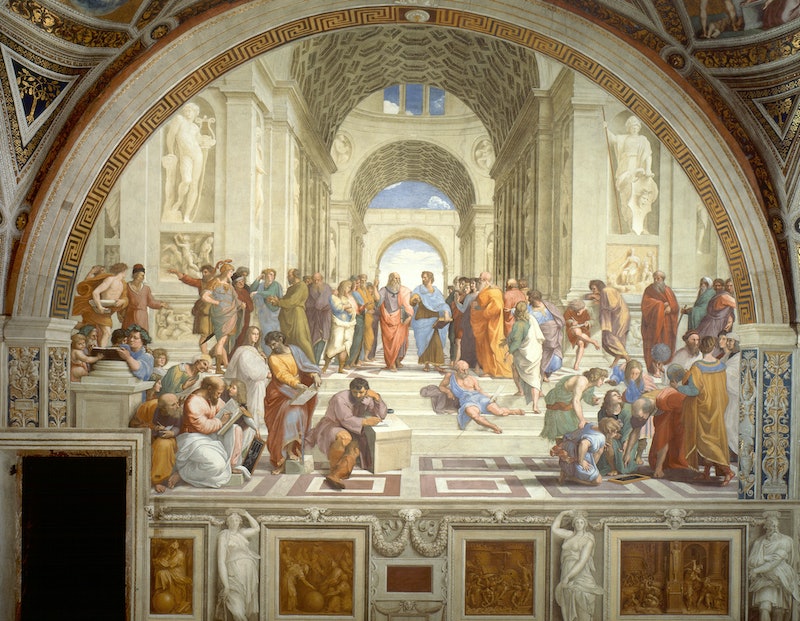 Some thousands of years later, ancient philosophers continue to prove highly relevant. Modern political philosophy, logic, biology, ethics, and aesthetic theory have all been shaped by a select group of key thinkers that includes Plato, Socrates, Aristotle, Confucious, and many others. I would like to take a moment, however, to recognize the ways in which some of these brilliant minds failed to understand sex. Here is a list of some of the strangest claims ancient philosophy superstars have made about the act.

Let’s start with everybody’s favorite 4th century Taoist: Ge Hong. Hong viewed sex as a means of achieving immortality — however, in order to do so, he said that men needed to conserve the vital energy found in their semen by refraining from ejaculating during sex. He thought holding in semen allowed a man's sacred essence, known as jing, to shoot up through the spine to the brain, rather than being released through ejaculation. Oh, and ejaculation also led to disease and premature aging in his book.

I’ll admit it: Aristotle, Plato’s star pupil, was pretty brilliant. But he had some crackpot ideas about women, particularly regarding their sexual pleasure. Aristotle maintained that only fair-skinned women were capable of climaxing, and that to increase "discharge" (his word for wetness?) during sex, women should eat particularly pungent foods, like garlic or peppers. Aristotle also believed that sperm was a liquid that came from the final stages of digestion, and that conception took place only in the instance of female orgasm, an idea Todd Akin knows well. When a woman is pleased sexually, he maintains, she produces sufficient heat to attract the male’s seed, or semen, into her body.

Second century Greek diviner Artemidorus spent a significant amount of time writing about sex dreams, which he believed to predict future events. For example, if you dream about having sex with your son while you are on a voyage together — say, on a boat or a hike — something amazing will happen to you soon. Or: if you’re a political exile and dream about banging your mother, this means that you will soon be reunited with your mother country. And: If you’re a woman who dreams about having sex with another woman, you will soon become a widow.

Galen of Pergamom, a second-century philosopher-surgeon from Turkey, was quite preoccupied with semen. Galen equated ejaculation with seizures, and thus believed the act could be extremely dangerous. Ejaculating too frequently, for example, could cause a man’s body to become feminine in appearance. Galen had advice for ladies, as well, which is as endearing as it is misguided: To maximize your sexual pleasure as a female, he recommends joining a choir or dancing frequently. And the following advice applies to both sexes — Galen urges that you do not under any circumstances take hot bath, throw a javelin, or feel too many emotions before having sex.

For advice in the bedroom, look no further than Ovid, the classical Roman poet and philosopher. He recommended covering up your windows so that little to no light can peak through, the logic being that many parts of the body are best not seen. In fact, if you’re trying to ditch your mistress, you should keep the light on during sex so as to really see the details of her obscene and filthy body, as he suggested in his Cures for Love. This will then disgust you, allowing you to leave her and resume your moral life. Also, if you have a crush on someone you shouldn’t, Ovid recommends getting a well-lit glimpse of his naked body or try to catch him defecating, which will instantly extinguish your passion.