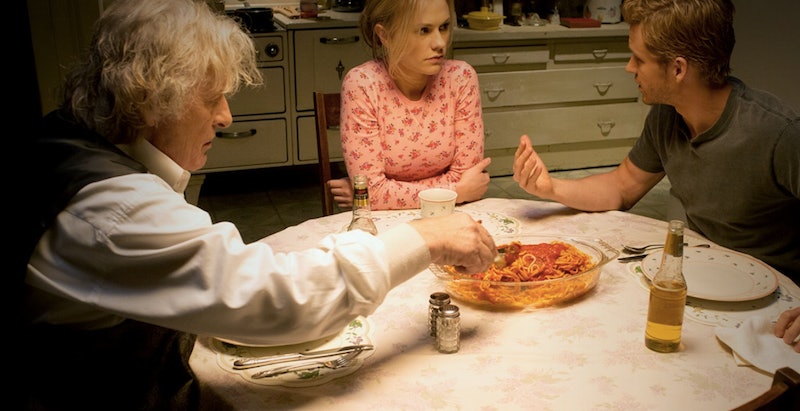 True Blood, how do you make our blood boil? Let me count the ways.

It's been only four weeks, and already HBO's vampire train-wreck misled us, made us question our own comprehension skills, caused us to build conspiracy theories, and inflicted various other forms of vampire-induced madness. Will this nightmare ever end?

Not if this season keeps going the way it's going. We're not even halfway through the season and Sookie has already got her killer faerie bomb just inches from Warlow's heart... and that's only because she's got her legs wrapped around him and her bra out. As it turns out, Warlow and cute Ben the Faerie are one in the same. How? Razors are a wonderful thing and dreadlocks, as it turns out, aren't extremely permanent.

Still, the fact that Warlow is actually unfairly attractive under all that scraggly filth isn't that obnoxious - in fact, it twists the story into a new place by delivering a villain who's also kind of alluring without compromising that pesky little thing called logic.

The rest of the episode, however, didn't fare so well. True Blood, these are the ways you've wronged us this week:

1. Nora is captured... but not until after she's given Sookie's faerie grandfather information that helps him figure out that Ben is Warlow: He's half fae, half vampire and Warlow is said to have led Lilith to the sun. Only a hybrid could have done that: boom, case solved. Off you go, Nora.

2. Patrick is dead, but his story keeps on a-kicking. The worst part of last season was, without a doubt, Terry, Patrick (guest star Scott Foley), and the fire monster that cursed them in Afghanistan and followed them home to Bon Temps. Unfortunately, Andy's faerie girls read Terry's guilty thoughts about Patrick's end and the dreadful story has legs again. But hear me now, True Blood, Foley will never go down in TV history as Patrick the annoying plot source. Noel Crane forever.

3. Eric's big, sexy scene with Willa is a big, sloppy cliche. We get it, writers. You've read Dracula. Did we really need a textbook deflowering, in which the tall man in all black drenches a white gowned girl in her own blood before turning her into a vampire in a wildly orgasmic and sexual ritual? Isn't getting creative in this area supposed to be the series' sweet spot?

4. Sookie doesn't want to get all "Sadie Hawkins" on Ben and ask him out on a date. Look, I'm not thrilled with the "homeliest girl in all the land" man-chasing origins of the Sadie Hawkins Dance tradition either, but Sookie, this isn't 1937. Women don't need a special day to be able to ask out a man... even the one they plan to seduce and kill.

5. Warlow being secretly attractive is one thing, but did this show seriously just add "Faerie/Vampire" hybrid to its list of nonsense supernatural beings? Werepanthers with a blatant disregard for decent sexual practices (poor Jason), weren't bad enough, it seems.

6. Alcide needs a new storyline (so let's call this one a lack of a plot twist). Three episodes of our favorite werewolf being generally awful at leading his pack, terrible at making decisions, and failing to communicate with sounds that aren't guttural grunts is really getting old.

7. Faerie blood isn't just magical, it's also the worst. The magic elixir is inherently resistant to being synthesized into Tru Blood as Bill demands, but now, it turns to human blood when it's been outside of its host, which means making the Tru Blood: Faerie Frost flavor probably isn't going to happen. Sorry, Bill. It was a good idea while it lasted.

8. Eric wasted his second time turning a human into a vampire on someone who wasn't a sure thing. He broke his rule about turning another human to vampire in order to send a message through Willa to her father, the Governor. Unfortunately, it seems all it did was act as a plot device to reveal what Anna Camp's evil Sarah is up to.

9. Speaking of which, we've got yet another man bewitched by an evil woman and her sexy, feminine wiles. Was a season of Bill being obsessed with Salome and naked, blood-soaked Lilith not enough? Apparently not, because the Governor is willing to forsake his vampire daughter because his sexy new girlfriend Sarah commands him to.

10. Pam is caught because she's simply careless. Nope. This is not even a bit believable. Sure, Pam was caught off guard because her emotions over her fight with Tara got the best of her, but would this seasoned veteran of evil shenanigans really waltz around on a suspiciously well-lit street while the Governor has his minions sweeping the state of Louisiana armed with UV-bullets? No, she wouldn't. Whoever they caught, it's not the Pam we've known for five seasons.

11. Nicole and Sam flee the werewolf pack, drink whiskey in a motel room, and share sad stories. Naturally, they're going to have sex (or at least make out on a bed). Wait, it happened immediately? Didn't Luna die just a few days ago? And doesn't Nicole look like she's about 20 years old? None of this matters because the circumstantial equation clearly outweighs just about everything else.

12. Jess is getting dumber. She's dumb enough to go along with Bill's plan to kidnap Andy's faerie daughters. She's also dumb enough not to use the cells that Bill had built in the basement when he was the vampire king of Louisiana to keep the girls in the house, because she thinks she's strong enough not to drink all their delicious faerie blood. While it's not all that surprising that Jess continues to make poor decisions that get her in trouble, it's starting to become more obnoxious than Lafayette's boring new job as Sam's seldom-seen helper.

In other words: get it together, True Blood.