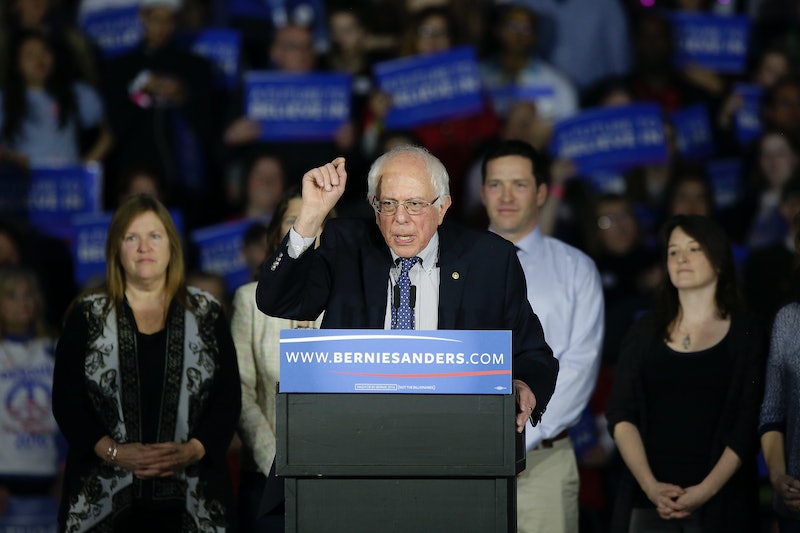 The Iowa caucuses took place earlier this week, but it seems like people just can't get enough of the Hawkeye State. On the Democratic side of the race, things seemed too close to call until former Secretary of State Hillary Clinton was declared the winner, with just a fraction of a percentage point lead over Vermont Sen. Bernie Sanders. Because of the close results, there have been calls for a results audit, particularly by The Des Moines Register — but Sanders addressed the Iowa results during Thursday's Democratic debate, and he offered a sobering perspective.

"I agree with the Des Moines Register, but let's not blow this out of proportion," Sanders said when he was asked by debate moderator Chuck Todd about the controversy in Iowa. "This is not a winner-take-all thing." He went on to include, "This is not the biggest deal in the world."

Looking toward an agreeing Clinton, Sanders pointed out that with the Iowa result as is, he has 20 delegates and Clinton has 22 delegates toward a nomination. "We need 2,500 delegates to win the nomination," he quipped, throwing things into a clear perspective about the importance of Iowa. It was perhaps the least Donald Trump-esque quote ever said — a refreshing moment considering Trump himself is still complaining about the second-place finish he received in Monday's Republican result.

On Thursday, the Des Moines Register published an editorial opinion piece that called for a reassessment of Monday's Democratic caucus. The paper noted that the margin separating Clinton and Sanders was small enough to have warranted a recount in states with more traditional primary procedures:

First of all, the results were too close not to do a complete audit of results. Two-tenths of 1 percent separated Bernie Sanders and Hillary Clinton. A caucus should not be confused with an election, but it’s worth noting that much larger margins trigger automatic recounts in other states.

It's this opinion that Sanders claimed to agree with at Thursday's debate. However, he minimized his dissatisfaction with the caucus. In doing so, he didn't just allow the debate to move on to more substantive issues, but he also probably helped his own cause.

Thanks to an around-the-clock news cycle and longer campaigns, it seems like the emphasis placed on the Iowa caucus grows with each election cycle. For months and weeks leading up to Monday night, pundits, candidates, and voters alike discussed Iowa and speculated about which candidates would win there. When it comes to presidential elections, Iowa is notable for at least two reasons: It's the first state to hold any sort of measurable, official vote (via its caucus) and it uses a very different election system than other states.

With so much emphasis placed on Iowa, a loss in the state can dominate a candidate's sound bytes for the next phase of the campaign. Literally over night, the conversation switches from, "How will you win Iowa?" to, "How did you lose Iowa?" Sanders made it clear on Thursday night that he wasn't going to have that conversation by demonstrating how statistically insignificant the Iowa results can be.

That's not to hate on Iowa: Sanders certainly didn't go that far. Rather, he celebrated his success and minimized his failure. Doing so on a large stage — literally — likely reassured his supporters and kept things focused on the road ahead.