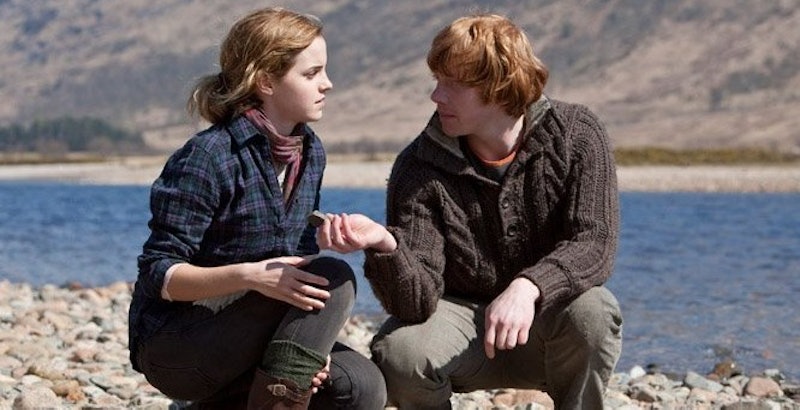 By far the most controversial canon couple in the Harry Potter-verse was J.K. Rowling's decision for Ron and Hermione to end up together. While the rest of the fans have long sounded off their opinions on this, now Ron himself is joining the fray — or, more specifically, Rupert Grint said that Hermione and Ron would be divorced by now. And quite honestly, this is the mic drop I have been waiting for since day ONE.

In an Huffington Post interview with Harry Potter co-stars Matthew Lewis and Evanna Lynch, Grint responded to a question about where he sees his character now and laughingly answered, "I would expect Ron has probably divorced Hermione already. I don't think that relationship would have done very well." After further prompting, he added in jest, "Yeah. Exactly. He's living on his own, in a little one-bedroom apartment. He hasn't got a job," and elaborated that he thinks they're briefly separated, if not divorced.

Of course, we have to take this all with a grain of salt. As we all know, Ron is probably rolling in it since he left the Auror offices to co-manage Weasley's Wizard Wheezes, so he's not living in a one-bedroom jobless. But as for the divorce? ... Personally, I think he hit the nail right on the head.

Before I explain my thoughts on this, one thing I need to clear up: I am not here to hate on sweet summer child Ronald Weasley. I love him as equally as I love all my faves in Harry Potter. He is a good person, a brave person, a compassionate person, and certainly deserves all the happiness in the world. The thing is, though, that he was never going to find that happiness with Hermione Granger, nor was she ever going to find it in him.

My opinion on this is not one I adopted after J.K. Rowling herself famously discredited the relationship by calling it "wish fulfillment," but rather one that I have formed through my own experience. While I don't profess to be as intelligent or badass as Hermione, I have identified with her the way a lot of girls growing up in Generation Potter did, and tried to emulate everything she represents. She is ambitious, she is impatient, she is whip smart, she is just, she is kind, she is relentless, and above all, she is complicated. If the characters in Harry Potter were three-dimensional, then Hermione, in some ways, was four. She notices more, cares about more, anticipates more. She's so present, so in-your-face, and so unapologetic about it.

I understand that Ron was supposed to serve as a foil to Hermione — the well-intentioned one who didn't pick up on cues, the one who saw things simply, the lovable Phil Dunphy to her Claire. And sure, maybe in the beginning he would have helped smooth out her edges, and she would have given him a fuller sense of himself and the world. We saw in the narrative when there were times when they were really in sync, and it worked.

But ultimately this dynamic would not have been enough to preserve them — because as great as their chemistry was, the kind of things they fought about as kids and young adults were not issues that would go away. They are so fundamentally different in nature that the fights wouldn't have worn themselves out the way that the epilogue led us to believe, but would have just been recycled, circuitous, and exhausting. What is so great about both Ron and Hermione is their stubbornness and ability to be true to themselves, and it would be an injustice to either of these characters to hope that one of them yielded and changed that for the other.

So yes, I personally think that if this were real life, Ron and Hermione would divorce. It would be amicable. It would suck. But it would also be real. And hopefully the two of them would both be better off for it, in relationships with people who better suited them, with people they didn't have to compromise parts of themselves to be with.