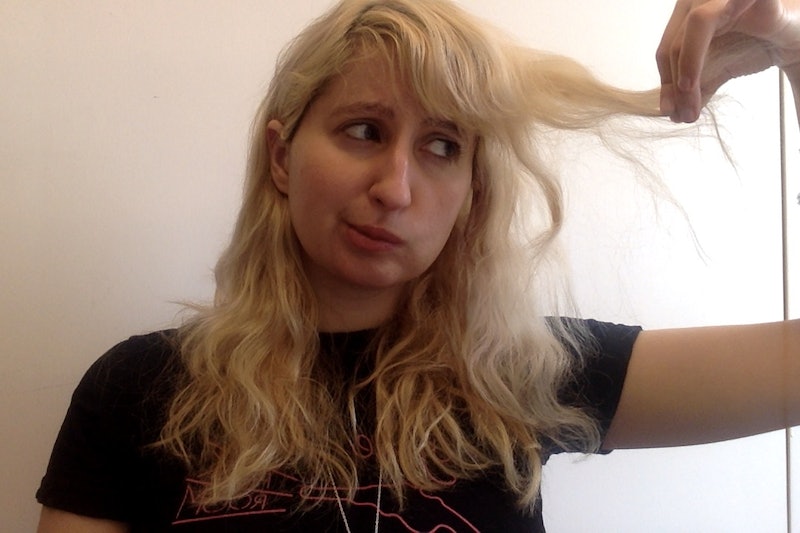 God made me a brunette; but my ability to keep a straight face while I pay people money to burn my hair with chemicals every six to eight weeks makes me a blonde. And like anyone whose beauty routine is an abomination against nature, I am always looking for new ways to condition my hair! Though I regularly apply a variety of moisturizing hair masques and salves, and cover my hair in coconut oil until I look like I just barely escaped from an industrial accident at a lube factory, I still sometimes find that my hair is a bit rough. And so, like the ancient mystics of generations past, I search for answers. And, also like the ancient mystics of generations past, that quest for answers sometimes leads me to douse myself in stuff that supposedly contains the reproductive fluids of oceanic mammals.

Of course, that's not the whole story — after all, many of you reading this right now are probably dealing with dry hair, and have never thought to remedy it with anything that involves the word "sperm." But last week, as we prepared yet another episode of Bustle's sex and relationship's podcast, I Want It That Way, I found that I was looking for new ways to express my inner garbage monster. Honestly, I was told we were going to be discussing people who drink cocktails infused with semen, and I started panicking and trying to think of something gross I could do to talk about on the podcast, because I hate it when anyone is grosser than me (grossness is the only category I accept LinkedIn endorsements on). And so, with the world ahead of me and some work computers with which to google the phrase "sperm products," I was off. Which is how I found out about whale sperm conditioner.

But though I found mention of the conditioner on some blog posts and hair care message boards, and a few online retailers were stocking it, even after I ordered it, I was pretty sure that whale sperm conditioner was an urban myth — and that I had basically just handed over my money to some internet thieves involved in a very sexually depraved zoological/ hair care scam.

Until my whale sperm conditioner arrived!

Of course, I was so wildly excited to find that my sperm conditioner actually existed that I used it immediately. First, I went through my usual pre-shower ritual (one hour of soaking my hair in coconut oil, typically while practicing dance moves from the Rick Astley "Never Gonna Give You Up" video). Then, because I am a whale sperm scientist who is deeply invested in the sanctity of the whale sperm scientific method, I designed an experiment to examine the quality of the whale sperm conditioner: I conditioned half of my head with my usual conditioner, and half with the substance that was supposedly modeled on the chemical properties of whale jizz (as you can hopefully see on the package, this product is "whale's artificial sperm" conditioner — no actual sea creatures were harmed OR masturbated to the point of orgasm in the making of this article).

The conditioner felt dense, and had a few tiny hard chunks in every handful — which, I must admit, is similar to what I had imagined whale semen's consistency to be like. What were these little crispy chunks? Were they some kind of freeze-dried whale semen, which would be activated in the shower? Would I then have a scalp full of puzzled whale sperm, frenziedly mistaking my scalp for some sub-par female whale reproductive organs? I gritted my teeth and decided to find out, because I am a journalist.

I rinsed as usual and went to bed with wet hair, eager to find out which side won in the morning.

And when I woke up, I was shocked to find that my whale sperm hair both looked and felt pretty damned good. Look how excited I am!

Maybe she's born with it, maybe she slathers herself in the seminal fluid of aquatic mammals. Only her hairdresser knows for sure!

Can you tell which side is which, just by looking?

Here's the whale sperm side, up close:

I doubt you can tell from the photo, but it is insanely soft. In the years I've been bleaching, my hair has often had a texture that I can only compare to the hair of a Barbie doll that got stuck in the hand dryer in a public restroom. So finding a product that could make my hair feel like actual human hair was incredibly exciting for me.

And here's the sperm-free side:

A little less soft, but more body, and it holds a wave a bit better.

As the week went on, both sides seemed to wear just as well; four days later (yes, that is how often bleach blondes wash their hair, deal), my whale side was softer, silkier, and less gnarled than my non-whale side. Plus, my hair had not gotten pregnant with whale babies! Basically, there were only positives to using this conditioner.

But just because I was content with my soft, smooth, whale-bespermed hair didn't mean that I was no longer hungry for answers! Like, why was whale sperm supposed to be so good for you hair that people were making chemical approximations of it?

Well, the truth is less NC-17 than you may have hoped (can we give parental guidance ratings to whales? No persons under the age of 17 will be allowed to witness this whale boner?): according to The Hair Fashionista's Blog, the term "whale sperm" is a translation error — the words are transposed, and should read "sperm whale."

OK, fine, we've taken the exciting semen-related factor out, but still, what does this have to do with whales? Well, it seems that these conditioners contain an artificial formulation of a substance called "spermaceti," an oil traditionally extracted from the craniums of whales by killing them and then cutting it out (so yes, it was actually much worse than extracting it from the penises of whales by giving them hand-jibbers).

This was confirmed for me after I perused a 1859 book called The Household Encyclopedia, which included a recipe for using actual spermaceti as an early form of hair gel. So there you have it — we have a long history of applying various whale gunks to our heads to give us the beautiful hair that we so desperately desire. The book also advises that you make sure you hair is "well rubbed with a piece of flannel kept for the purpose" before bed. I would have laughed at that a week ago, but today I have soft, delightful hair due to the generous application of faux whale-skull oil, so really, who am I to be turning my nose up at anything?

Want more of Bustle's Sex and Relationships coverage? Check out our podcast,I Want It That Way, which delves into the difficult and downright dirty parts of a relationship, and find more on our SoundCloud page.