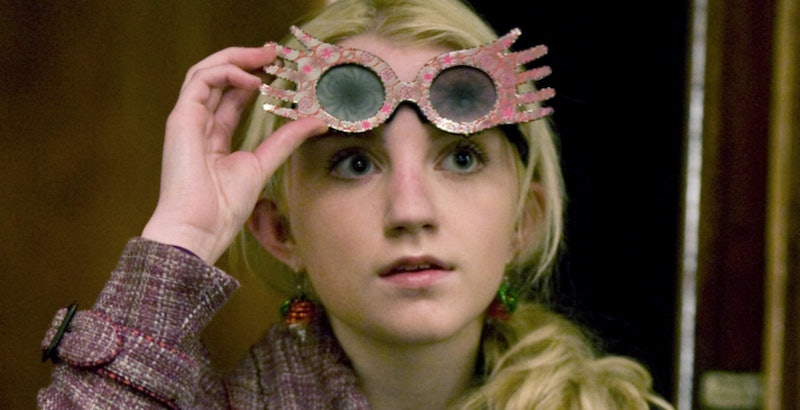 As much as I love Hermione Granger, Luna Lovegood is by far my favorite fantastical witch from Harry Potter. Her character was, of course, wonderfully weird in the books, but actress Evanna Lynch played Luna so magically on-screen that it made you think maybe Hogwarts was real after all. The Irish actress was charming, strange and soft-spoken, not to mention adorable, in all of the Harry Potter movies, and she captured what the idea that makes Luna Lovegood so lovely: no matter what, you should always be yourself. And even though the last Harry Potter film premiered five years ago (feel old yet?), in real life, Lynch has still been channeling that Luna spirit.

The now 24-year-old is still acting, but these days her main focus is to help others and spread awareness. Struggling with eating disorders from the age of 11, Lynch has used her celebrity to promote healthy body image and recovery, self-love, and self-improvement. Her Instagram feed is full of hopeful and inspiring messages; the type Luna from the Harry Potter series would likely share. So, what has Lynch been up to in the five years since The Deathly Hallows and leaving the character of Luna behind? She's basically the Muggle version of the sweet, creative, and wonderfully weird Lovegood, spreading her messages of hope and self love.

After Harry Potter, Lynch's career quieted down a bit. She had roles in a few movies, but in 2013 she took her talent to the stage for another magical production: playing Bess Houdini, wife and stage assistant to notorious magician Harry, in her friend Stuart Brennan's production of Houdini. She told the Irish Post during the run of her role as Bess that she had "always wanted to do stage. Always." Is that Snape I hear?

She Loves Her Cat

And she aspires to be one, according to her Instagram bio. Her cat, appropriately named Lil Puff, is almost inappropriately adorable.

Struggling with self-esteem issues and eating disorders, Lynch has been a positive and open inspiration to young women and girls, encouraging them to take their time on their own journeys to overcome their own insecurities and learn to have confidence in themselves.

And in a touch of real life magic, it turns out that before Lynch even auditioned for the role of Luna, she wrote a letter to J.K. Rowling at the age of 11 asking for help and hope to get through her anorexia. She told The Sun,

I told how I looked up to her. She wrote back and was like a counsellor. She told me anorexia is destructive, not creative, and the brave thing was not to succumb to it. I told her I’d love to be in the films and she encouraged that but said I’d need to be well to do so. In the end I think that’s why I recovered.

Further proof that Rowling is a real, good witch.

She Loves To Read

Lynch is a bibliophile, and she often posts the books she's currently reading on her Instagram, if you ever need some recommendations. Here she is with a beautiful Nabokov book.

Lynch admitted that Los Angeles had changed her, so much so that she became a certified yoga teacher! Though she joked in an interview with the Irish Independent, "The funny thing is that I've been told that to make it as a yoga teacher in Los Angeles is harder than making it in Hollywood." I believe it. There must be hundreds!

She Works With UNICEF

Bless you, Luna. Lynch has used her Harry Potter fame to do good. Not only does she advocate for healthy body image, she also works with UNICEF. In 2014 she went to the Philippines to help rebuild from the devastating effects of Typhoon Haiyan and was surprised when she was often recognized there as Luna Lovegood.

Lynch stopped eating meat when she moved to Los Angeles from London — a mix of that breezy fresh pressed juice life vibe and Lynch's passion for stopping animal cruelty and unsustainable farming. In an interview with the Irish Times, Lynch said that she couldn't stand to eat animals anymore because she loved them so much. She's a vegan in Los Angeles, but when she goes home to mum's in Louth, she's a vegetarian, because the vegan options are limited. Plus, she can't resist her mom's pastries.

And who wouldn't? In this wonderful recent Instagram, Lynch talks about looking back at who she was when she auditioned and how she has grown. In a candid Q&A with The Western Front in 2013, Lynch talked about being an anti-bullying spokesperson, and that she was inspired by Luna:

It's important to me because she helped me overcome my shyness. I've always been more artistic and felt a little more odd, and that's the way Luna is. Seeing her in the books helped me grow up and overcome that. Getting to play her, I kind of realize I have to follow those values and I want to do this character justice. I want to live that way.

I love you, Evanna Lynch! Ps. if you ever read this, I hope you know that I think Luna and Harry should have ended up together.

More like this
Rupert Grint Just Shared A *Major* Update About Ron Weasley’s Future
By El Hunt
Another Side Of Rupert Grint
By Maria Sherman
Your Guide To Watching 'Everything Everywhere All At Once' In The UK
By El Hunt and Sophie McEvoy
Olivia Colman’s New Role Is A Huge Departure From 'The Crown,' Based On This First Look
By Sabah Hussain and Sam Ramsden
Get Even More From Bustle — Sign Up For The Newsletter
From hair trends to relationship advice, our daily newsletter has everything you need to sound like a person who’s on TikTok, even if you aren’t.