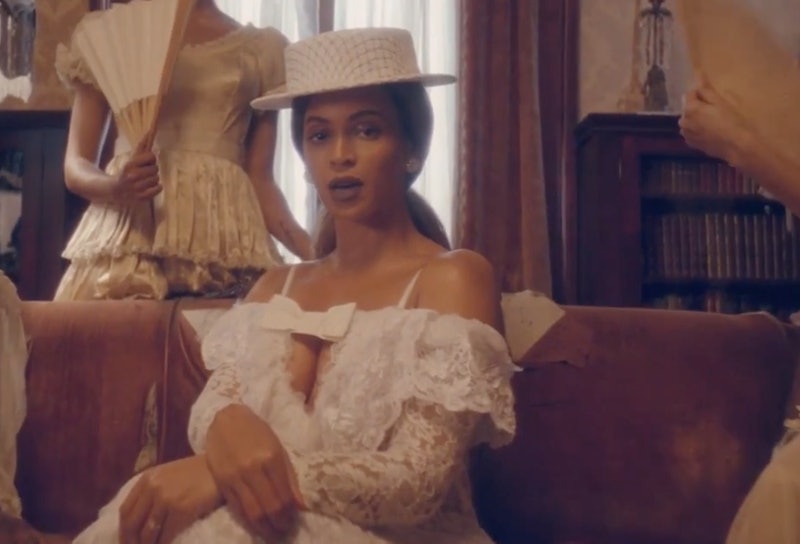 Lots of people at this moment are canceling their plans, not doing the work they're supposed to, and generally not functioning as usual because Beyoncé just dropped a new video and song for "Formation." Obviously, this is standard procedure for a Beyoncé release, so it's no reason to be alarmed — but the complexity of "Formation" lends itself particularly well to numerous rewatches, as well as perhaps a higher degree of awed amazement than usual. Beyoncé went above and beyond for this song, and that's totally clear from the one moment you probably missed in the "Formation" video.

To say that there are hidden messages in "Formation" is not to say the video is subtle with its messages; it's an overtly political video with critical references to police brutality and Hurricane Katrina. Her message is clear throughout, from the opening sample of Messy Mya asking "what happened after New Orleans?" to her assertion that she "might just be a black Bill Gates in the making." However, there's so much going on in the video — so many costume changes, shifts, characters — that it's easy to miss some of the quicker shots, such as those of Blue Ivy or the more pointed political messages.

Obviously, you noticed Beyoncé lounging on a slowly sinking police car; the meaning of that, while not totally obvious, seems to both reference Hurricane Katrina, condemn the police, and symbolize a kind of rebirth. However, there's a very clear, barely hidden graffiti message that could potentially blend into the background if you weren't paying attention to it, or weren't looking for it.

The graffiti, which reads "stop shooting us," is a message frequently expressed by the Black Lives Matter movement and other racial justice activists criticizing the disproportionate number of black people killed by the police. Beyoncé and her husband Jay-Z have been quiet but passionate supporters of Black Lives Matter: Yesterday, on the day that Trayvon Martin would have turned 21, it was announced that Jay Z's Tidal would donate $1.5 million to Black Lives Matter and similarly motivated organizations.

The graffiti image in "Formation" was preceded by one of the most touching moments of the video: a small boy dancing in front of a group of armed police officers. Eventually, they join him in the "hands up, don't shoot" gesture that references Michael Brown's death. It's a powerful message in a powerful video; luckily, it's not hidden enough to miss.