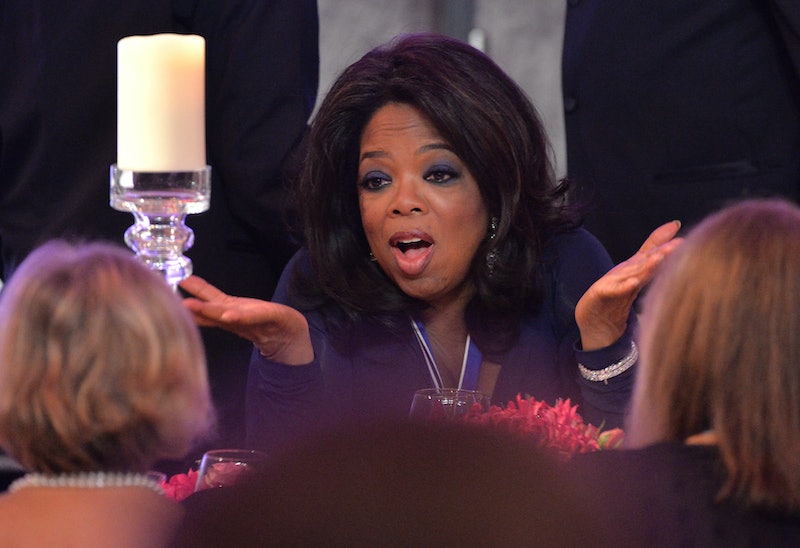 She's a talk-show extraordinaire, billionaire media maven, and acclaimed actress: As Oprah celebrates her 60th birthday, she's accomplished a lot more than most people do in their entire lifetimes. So what's Oprah up to today? A whole bunch of nothing, it turns out, since she canceled her birthday bash. Turns out the guest list was getting out of hand. (Proving once again that because she's Oprah, she can do whatever the heck she wants.) We're assuming she'll simply be hanging out with her man Stedman and BFF Gayle King, drinking wine and doing whatever Oprah-like things Oprah does in her spare time.

For those of you living under a mega-tycoon rock: Now worth an estimated $2.9 billion, Oprah was born in rural Mississippi to a teen mom. When she was just 19 years old, she left college to become the first black female news anchor in Nashville. In the early 1980s, she took over the Windy City's AM Chicago, which was later renamed The Oprah Winfrey Show. In 1985, Winfrey earned an Oscar nomination for her role in The Color Purple.

In 1986, The Oprah Winfrey Show became syndicated nationally. The show aired for 25 seasons from 1986 to 2011, making it one of the longest-running talk shows in TV history, attracting 49 million viewers each week.

The show wasn't exempt from a fair share of emotional and controversial moments. Also, there was a lot of Oprah yelling celebrities' names:

Let's remember some of her show's most headline-making moments:

Oprah Reveals Her Rape on Air

In 1986, Oprah told viewers she was raped by a relative when she was only nine years old. The 19-year-old cousin who raped her took her out for ice cream and told her to keep it a secret. Oprah was also sexually abused by a family friend and her uncle. In 1990, during an interview with Truddi Chase, "the women with 92 personalities" due to sexual abuse, Oprah broke down crying, repeatedly asking producers to stop taping. She revealed her abuse because "maybe the closet where so many sexual abuse victims and their molesters hide might swing open just a crack today and let some light in."

In 1987, Oprah traveled to Forsyth County, Ga., a place where no black person had lived for 75 years. She interviewed people at a town hall meeting who had no qualms spouting off racist views right in front of her face. "I know we were stepping into a shitstorm," Oprah later admits. Amazingly, 24 years after the episode aired, Forsyth County became the fastest-growing place for blacks in the state.

Oprah openly discussed her fluctuating weight on her show over the years. The episode "Diet Dreams Come True" in 1988 was the show's most-watched episode, and Oprah famously wheeled out a red wagon full containing 67 pounds of meat to represent her weight loss. She ripped off her coat to reveal her newly slim figure in size 10 Calvin Klein skinny jeans. Even though she contributes that moment as the one that made her a celebrity, Oprah later called it a “big, big, big, big, big, big, big mistake!” and "one of the biggest ego trips of my life.”

It was the jump that stunned the world. When Tom Cruise jumped up on Oprah's couch in 2005 to shout about his infinite adoration for Katie Holmes, everyone wondered if he had caught more than just the love bug. (Even Oprah looked a little scared.) Holmes and Cruise's marriage has since dissolved — along with Tom's acting credibility — so it ended up being a lose-lose for everyone involved.

Here's the real Golden Rule: Don't mess with Oprah. Because she will tear you down — or into a million little pieces. After author James Frey admitted that he made up some parts of his memoir, A Million Little Pieces , Oprah was really pissed, to say the least. She had chosen it for her book club and had already defended previous attacks on his credibility. Frey admitted he had lied about spending three months in jail and "altered" how his girlfriend killed herself. Oprah has since cooled about Frey's confession and even said, "I feel I owe you an apology."

In 1993, Oprah had a live interview with Michael Jackson at his Neverland ranch, and 90 million people tuned in to watch. She asked about some touchy subjects, including Jackson's plastic surgery, his childhood, his sexuality, and even crotch-grabbing. In the interview, Jackson came off as childlike and fragile, telling Oprah that he tries not to look in the mirror, is never satisfied with his appearance, and dodging a question about virginity.

For all her billions earned, no one can argue that Oprah has been pretty generous in the past — even with complete strangers. In 2004, in the season premiere of her 19th season, Oprah gave every single member of her audience (276 people) a new Pontiac G6. The audience went freaking insane, as did Oprah, obviously.

However, prize-winners soon found out they had to pay up to $7,000 in taxes and keep the car, sell the car and use the money to pay taxes, or forfeit the prize completely.

Image via The Panel Crasher