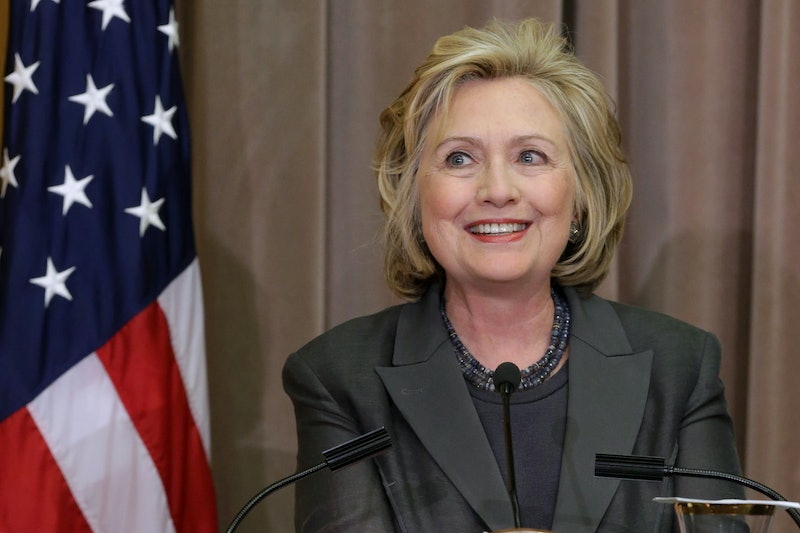 In 2008, I was a big HRC supporter, to the chagrin of many of my “progressive” friends who were voting for Obama. Back then, my friends, like many other Democrats, were in love with Barack Obama and what he represented to them — change and hope. Clinton’s “experience” platform did little to move voters in my cohort of young, well-educated Northeastern liberals. Some of my friends and colleagues in Rutgers' Women and Politics department knew better and understood that the gender dynamics of the campaign very much influenced Clinton’s decision to run on experience — we know from political research that, all else equal, women are judged as less experienced and qualified as candidates compared to men, and because of this Clinton really had no other choice but to campaign on experience.

Throughout the primary season, I often found myself having to defend my choice to support Clinton. I cycled through what were the most common justifications at the time — Clinton would be ready on day one, and Obama hadn’t proved himself yet, was the most common reason I cited, which also happened to be what Clinton herself was saying. But looking back, the real reason I was voting for Clinton was something I was ashamed and discouraged from admitting — I voted for Clinton because she was a woman.

The media made a theme out of the black candidate running against the woman candidate, even though the multiplicity of each candidate’s identity (Obama is not simply black, he is a black man. Clinton is not simply a woman, but a white woman) was routinely ignored. Especially in my social network, the idea of voting for a woman candidate simply because she’s a woman was derided as short-sighted, even silly. But really, when it came down to it, Clinton’s gender is what truly distinguished my choice to vote for her over Obama, and it’s why I already know she will get my vote again in 2016. But this time I’m not ashamed to admit it, and here’s why.

Clinton’s gender is what truly distinguished my choice to vote for her over Obama, and it’s why I already know she will get my vote again in 2016.

Before I begin, I should say that I am a staunch Democrat and a proud liberal. I have made a career out of providing strategic advice to Democratic, pro-choice candidates. My partisanship and ideology are extremely meaningful to me, and I am passionate about electing leaders who I believe will advocate for social justice. I believe in a social safety net, I believe that health care is a human right that should be provided for all, and I believe that the government should provide a roadmap to citizenship for immigrants who are here illegally. So if Hillary Clinton were running under the Republican ticket, I would never vote for her. Like many other Americans, party trumps almost every other consideration for me when it comes to making a voting decision. However, when the choice is among Democrats in a presidential election, the woman candidate will get my vote.

Many Americans might lambast the idea of voting for a candidate based on descriptive characteristics like gender. We should vote for candidates based on their policy positions, we should extensively research each candidate, pay attention to the media, listen to what they candidates are saying, and then make a choice based on the information we’ve collected over the course of the campaign… right? The model of the rational “calculator,” who collects and digests a wealth of information about each candidate before making a well-informed, thoughtful choice may be the ideal model of decision-making in a democracy, but it is far from reality.

A wealth of political science research reveals that not only is the “rational calculator” model of a voter unrealistic, but that it doesn’t necessarily lead to a better decision than using “cues” or heuristics to make decisions. Research by political scientists Richard Lau and David Redlawsk has revealed that voters who base their decisions on one or more of the common cues voters use (party affiliation, endorsements, polls/viability, and candidate appearance) actually end up making the same decision they would make if they were fully informed, and had performed the “rational calculator” model of decision-making.

So based on the fact that most Americans do not base their decisions on rational, informed calculations but rather rely on cues, voting for Clinton because she’s a woman seems to be a good a reason to vote for a candidate as any. Who can forget the Bush voters in 2004 who would tell reporters that they were voting for him “because he just seems like a guy I could throw back a beer with?”

The reason why voters rely on cues, however, is not because they’re dumb or lazy, it’s because cues are an efficient way to process information and make good decisions. For example, if you know a candidate is a Democrat, the party “cue” can help voters infer much more about the candidate — more than likely, that candidate supports government assistance for low-income citizens, is pro-choice, and supports gay marriage, among several other policy positions. Cues don’t work 100 percent of the time — for example, there are a small minority of Democrats who are anti-choice — but they work often enough that voters can use them to make good decisions, as though they were well-informed.

Candidate “appearance” is also another common heuristic, but this doesn’t mean the type of shoes or suit the candidate wears, but rather descriptive characteristics, like race and gender. Sometimes these cues might influence voters to vote for the candidate who resembles him or herself, and in fact some political science research has found that voters tend to vote for candidates who are similar to them demographically — for example, a white, well-educated man will likely vote for a candidate that is also similarly privileged by race, education, and gender. Rather than demonstrating a “short sightedness,” actually many scholars and theorists argue that descriptive representation is a good thing for democracy. Having leaders in public office who resemble the demographic characteristics of the population (and in turn, represent a shared history, values, and experiences) at-large is meaningful, and citizens report that this makes them feel better represented.

But beyond the descriptive representation benefit, a candidate’s gender or race can also reveal other qualities in a candidate that are appealing to voters. For example, a host of research has found that women literally legislate differently from men. On average, women tend to adopt a different leadership style than men, and focus more on consensus-building, cooperation, and compromise. Look at what ended the government shutdown a few years back — women Senators led the way, inspiring remarks from Republican men like Senator John McCain: “I am very proud that these women are stepping forward. Imagine what they could do if there were 50 of them.”

Yes, imagine if women were able to reach parity in the government. Not only would the style of leadership and the way politics are conducted change, but public policy would as well. Political science research has found that women politicians have different policy priorities than their male counterparts, and they are more likely to advocate for policies that particularly help women, girls, and people of color. With more women in office, immigration reform would probably be done by now — women’s combination of more progressive attitudes and leadership styles that focus on consensus and getting things done gives me no doubt that immigrants would have access to citizenship by now. For progressives who care about social justice, electing more women should be a priority. Not only will women advocate for this platform, but they will actually work to see that it gets done. The idea that women leaders will act differently than male leaders it not merely an assumption nor a stereotype, but rather a trend rooted in empirical reality. It doesn’t mean that every woman will act this way nor that all men will act contrary, but rather that on average, women are different in ways that can have positive consequences for our political world.

So at the end of the day, I’m voting for Hillary Clinton because she’s a woman, and because of what that means. I’m not ashamed of it, and I hope that others aren’t either this time, because not only is it a valid reason, it’s a good reason to vote for a candidate. Being a woman candidate means something different — surely not always, and there are always exceptions — but often enough. So far, it seems like the Clinton campaign is going to present gender as an asset this time around, and I think that’s a good thing. I hope other voters see it that way too and that the media doesn’t punish her for it.

So I’m voting for Clinton because she’s a woman, and because of what that means she will do as a president, but on top of that I guess I’m voting for her because she makes me feel hopeful. And to me, that’s a good a reason as any.

More like this
Kim Kardashian Is Releasing A Line Of Earbuds With Beats
By Alexis Morillo
25 Things I've Reduced My Life To, In Addition To WFH In My PJs
By Ginny Hogan
The Spiritual Meaning Of The August 2022 New Moon
By Nina Kahn
Your Daily Horoscope For August 12, 2022
By Mecca Woods
Get Even More From Bustle — Sign Up For The Newsletter