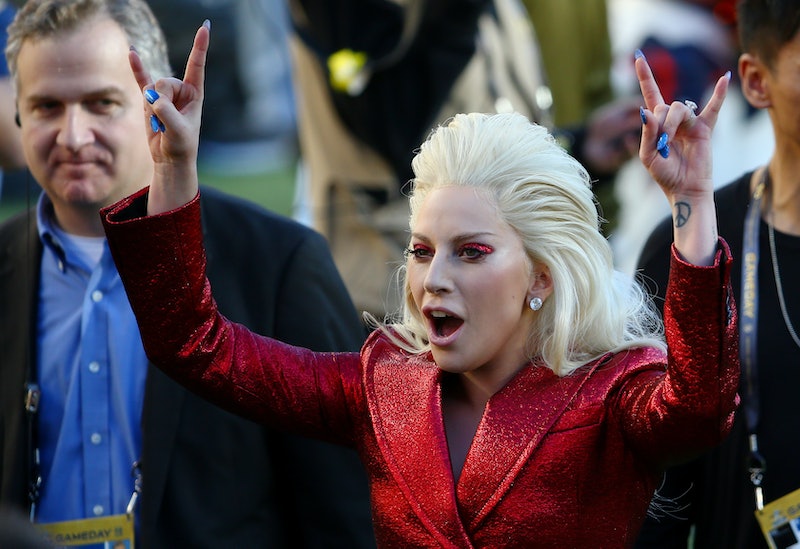 Whether you love her or not, there's just something about Lady Gaga's attention to detail that is seriously unmatched by anyone else in pop music today. I can't think of a more perfect example than Gaga's mismatched shoes at Super Bowl 50, which she wore while singing the national anthem. The talented singer not only dazzled in her custom red Gucci pantsuit, but viewers also couldn't stop talking about the two different shoes that she wore on the field at Levi's Stadium.

"Red White and Sparkly Blue," Gaga wrote on Instagram. "Thank you Alessandro for my beautiful custom outfit tonight!" Her platforms were clearly a patriotic nod to the "Star Spangled Banner" with the bold red and white stripes on one shoe, and the starry blue and spikes on the other. While that in itself is amazing, the colorful, glittery platforms were also quite Bowie-esque. It would make sense for Gaga to give tribute to the late singer. Not only is she one of the late rocker's biggest fans, but Gaga is paying tribute to David Bowie at next week's Grammy Awards.

She's definitely channeling some classic Bowie with this androgynous look.

After seeing these shoes, I'm even more excited to see Gaga's tribute on Feb. 15. The Thin White Duke must be so proud right now.