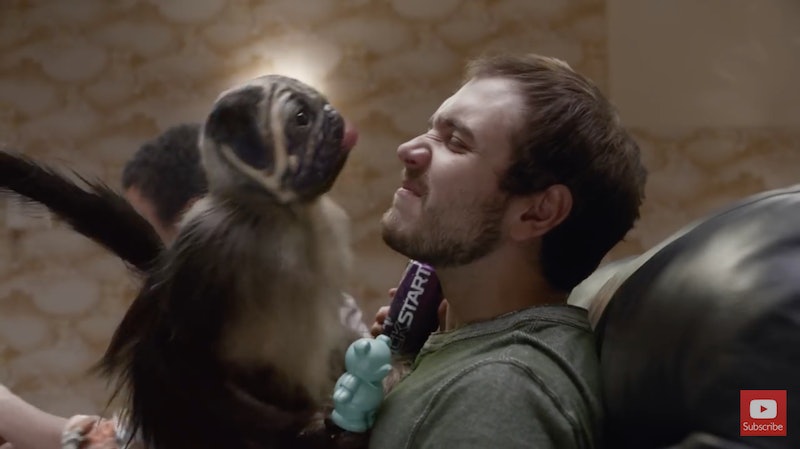 When Mountain Dew was creating its Super Bowl commercial, they decided to throw together three of the Internet's favorite things of all time: puppies, monkeys, and babies. The result? The "Puppy monkey baby" commercial, where a little creature in a diaper jumps around and licks people's faces as they drink Mountain Dew Kickstart. Admittedly, it's an unusual concept and Twitter responded with mixed reactions. Some may find the hybrid creature cute, while others may feel like it's going to haunt all of their nightmares from this point forward.

For those of you confused, Kickstart combines three things — Mountain Dew, juice, and coconut water. Get it? Three beverages, hence three cute beings combined into one. (Although whether or not the end result is cute is up for debate.) By the end of the ad, the guys in the commercial are dancing along with the Puppymonkeybaby as it chants its own name. It's definitely a sight to see.

Whether it's your least favorite Super Bowl commercial or the best you've ever seen, surely you'll have something to say after watching that. While I'm still processing what to make of it myself, Twitter had plenty of opinions on the matter.

To refresh your memory, you can watch the full ad below:

Now, here's a round-up of the best Twitter reactions to "Puppy Monkey Baby."

And finally, here's a tweet that does not fit in any of the categories above — the Puppymonkeybaby dabbing:

For more of Bustle's football coverage, check out the video below!