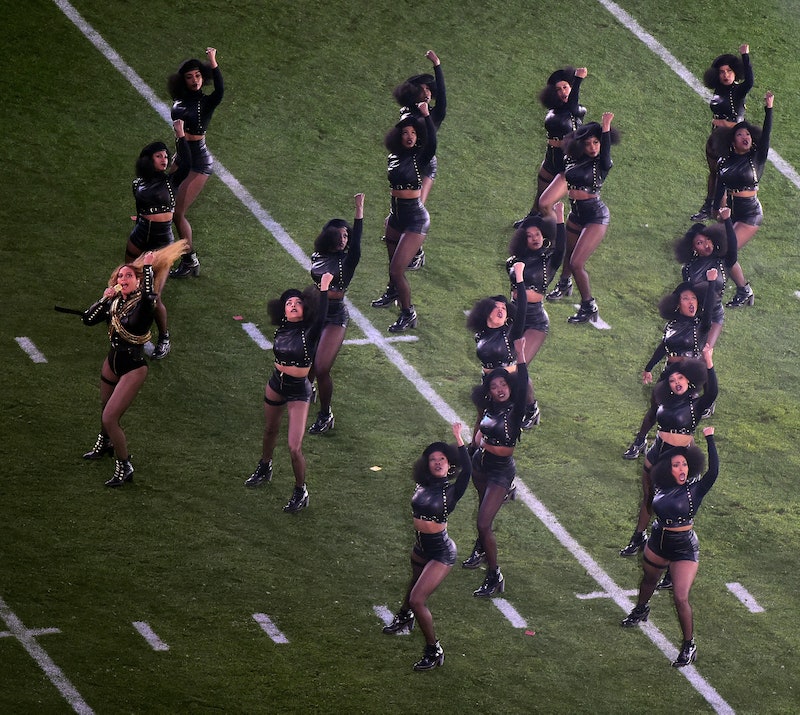 Unrest is still prevalent in the Bay Area despite Super Bowl festivities. All around San Francisco, protests have broken out over the treatment of the homeless and statues of the big game's logo have been defaced. Throughout Super Bowl weekend demonstrators and artists have found ways to shed light on issues in truly touching ways. Beyonce's dancers sent a powerful message with their "Justice for Mario Woods sign" that they gathered around and held on Sunday. It's unclear whether the dancers were awaiting their halftime performance with the likes of Beyonce, Bruno Mars, and Coldplay or just coming from it. The troupe nonetheless took the time to record a brief video that Black Lives Matter Bay Area posted onto their Facebook page.

Alicia Keys similarly echoed the dancers' statements during weekend Super Bowl festivities. Her Friday performance at Levi's The City Stage had the singer-songwriter commending Bay Area activists for their tireless work advocating for the fallen Woods. The 26 year old was allegedly shot and killed by police in the Bayview neighborhood in San Francisco. Woods was surrounded by five SFPD officers when he was fatally shot in December. Keys spoke to the crowd of her personal fears associated with what appears to be rampant police brutality. Keys said:

I want you to know that I salut everyone who has the courage and conviction to stand for what's right. I want to thank you for your commitment to making sure justice is done for Mario Woods. As the mother of two black sons it breaks my heart to see what we've been seeing, the trouble's we've been seeing on camera, and all the people that we'll never see.

More like this
The David Beckham Qatar Controversy, Explained
By Sophie McEvoy
MOBO Awards Found Kanya King On The Woman Whose Grit & Determination Spur Her On
By Kanya King
Mollie King & Stuart Broad Just Shared The First Pic Of Their Baby
By Sophie McEvoy
Amanda Gorman Shared A Powerful Message On Meghan Markle’s Penultimate Podcast
By Darshita Goyal
Get Even More From Bustle — Sign Up For The Newsletter