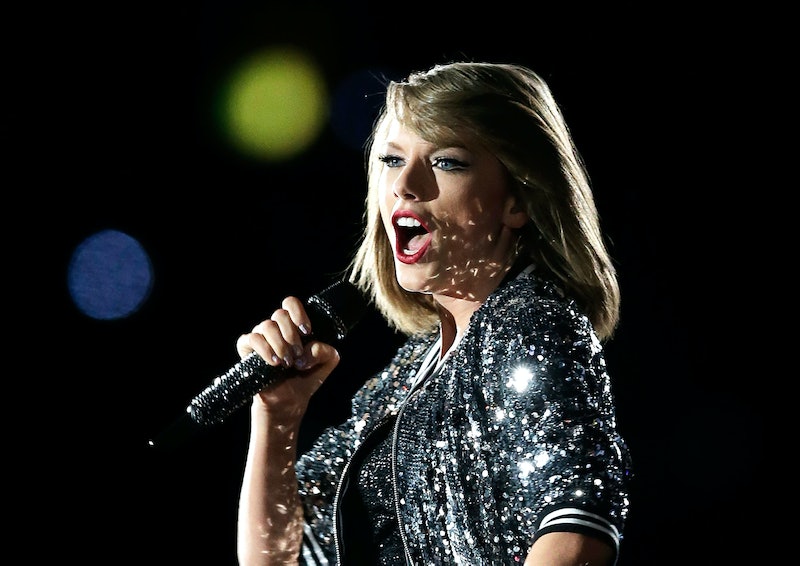 Step aside, Super Bowl 50! The next big performance event of the year is just around the corner and the opening act has finally been announced. That's right, the Grammys are on their way and, even better, Taylor Swift will open the Grammys with what is sure to be a show-stopping performance. The 1989 singer doesn't come as much of a surprise as the show's opener considering her seven nominations at the 58th Annual Grammys — including Album of the Year — however, what her opening song may be is what the real shocker is going to be here. Because, according to USA Today, the singer-songwriter's first choice song is set to be a song from 1989 that she has never performed on live television before, and one in which she is not nominated for a separate Grammy award. Considering all of her hit singles and performances over the past year, what's really left at this point?

Let me just break this down for you. As far as Taylor's Grammy nominations are concerned, the only specific songs she is up for includes "Bad Blood" (in which she's up for Best Music Video and Best Pop Duo/Group Performance) and "Blank Space" (in which she's nominated for Best Pop Solo Performance, Song of the Year, and Record of the Year). That cancels those two hit singles out of the running, And, aside from the songs that are Grammy nominated, she has performed "Shake It Off," "Welcome To New York," and "Style" live on television before.

That leaves just 11 of her original 1989 songs (from the original track list) left open for performance. So, which songs of hers are the top contenders? Here's are the ones I'm seriously keeping my ears open for.

Obviously, this song has to be frontrunner for her Grammys opening performance. Not only is "Out of the Woods" her latest music video debut from the album — she released the music video during Dick Clark's Rocking Eve with Ryan Seacrest — but it also happens to be the second single she released from 1989 in October 2014 (before the album's full release). From there, the song immediately hit the top of the iTunes charts. But, surprisingly, she still has yet to perform it on live television.

Another hit 1989 single that may be taking the 58th Grammys stage? None other than the controversial music video-helming song "Wildest Dreams." Not only was this song yet another pick during her Grammys Museum performance back on September 30 (in which she awesomely covered it while playing the electric guitar — You go girl!), but this song also was her fifth number one hit on the pop Billboard charts from her 1989 album. Plus, an old Hollywood-themed opening performance with (hopefully) an appearance from Scott Eastwood would be a ridiculously classy opening for the prestigious award show, don't you think?

Now, considering that Taylor Swift has already had so many 1989 hit singles already, her opening Grammys performance also makes me wonder one thing: Will she take this huge opportunity to release her latest chart-topping single? It's totally possible! But what makes me believe that "I Know Places" could be the one? Well, the OneRepublic and Ryan Tedder collaborated song was a song-writing process Swift was particularly proud of. Plus, it could be a refreshing new look into Swift's sound for those who haven't heard the song yet.

The song has also been in the public eye a couple of times before, both when she seemingly serenaded her boyfriend, Calvin Harris, with the song, and when artist Vance Joy covered the song as well. So, is it time for Swift to officially claim the song for herself? Maybe so.

At the 2013 Grammys, Taylor Swift went full-out Alice in Wonderland-themed with her performance of the song "We Are Never Ever Getting Back Together." She dressed like an adorable, sexy mad hatter and even went so far as to possibly diss her ex-boyfriend, Harry Styles, when she turned on a British accent. And, now, with her complete Alice in Wonderland-inspired song — "Wonderland" — is it possible that she could be continuing the Grammys theme in a bigger and bolder way? I sure hope so. And, it would be nice to have a live performance of the song after she did already perform it at 2015's Rock In Rio celebration.

So, what will Taylor Swift perform on the Grammys stage? Will she bring any celebrity guests on stage with her like she did with her 1989 tour? And, will Calvin Harris attend the Grammys with her — making them official celebrity royalty? It looks like we'll just have to wait to find out on Monday, February 15 broadcast on CBS starting at 8 p.m. EST. But the suspense is killing me.