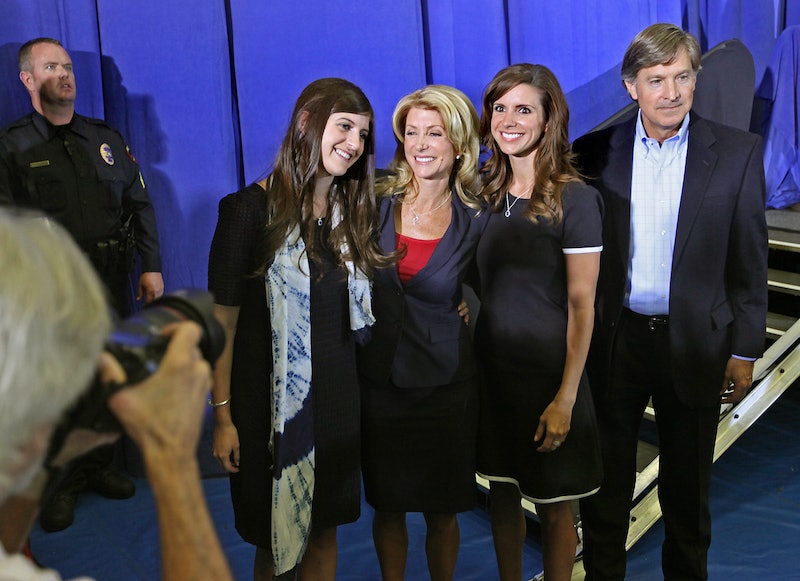 Wendy Davis may has filibusted her way into feminist history when she took on the Texas abortion bill last year, but she's now facing a new battle: To defend her reputation as she runs for Texas governor. According to a recent report by the Dallas Morning News, Davis' autobiography contains chronological and factual errors: in particular, Davis' recounting of her early life, from teenage mother living in a trailer park all the way to Harvard Law School and Congress. And in the best kind of feminist style, Davis' daughters have sprung to their mothers' defense.

Through open letters circulated by Davis’ gubernatorial campaign team, Dru and Amber Davis explained the involvement of their mother's second husband, Jeff Davis, in the lives. Jeff met Wendy when Amber was a child, and is Dru's biological father and Amber's stepfather. Both girls addressed their mother's falsely reporting the age at which she got pregnant for the first time — at 21, not 19 — and for how long they all lived in a trailer park.

The chief dispute centers on the fact that Jeff apparently looked after the two girls when Wendy was studying in Boston, and took custody of them in 2005 when the couple divorced. Far from left holding the babies, as Davis suggested, the now-senator was allegedly ordered to pay child support.

This new information reframes Davis' narrative as a single mother living in a trailer park, to say the least. But as her elder daughter Amber argues in one open letter, the idea that their mother "left us to be raised by our father" while she went on to pursue her education is both "ridiculously unfair" and "completely untrue." As Amber wrote:

Dru and I have always been her number one priority. We had an amazing support system while she was at Harvard and she was constantly traveling back and forth from school to be with us. I’m proud that my parents were able to make this arrangement work.

Sadly, I feel the need to be crystal clear on the malicious and false charge of abandonment as nothing could be further from the truth. My mom has always shared equally in the care and custody of my sister and me…

I can tell you that my mom was a remarkable mother and continues to be so to this day. She was there on my first day of school and my last, and so many days in between. She never missed a school performance or a parent-teacher conference. Even if that meant she had to miss something else important. My sister and I were always her first priority

The scandal comes at a bad time. Davis has raised $12 million for her gubernatorial campaign, which is more than double what opponent Greg Abbott managed in the last six months of 2013 — but Abbott's total still stands at $27 million.

Not to mention, sending your family out to fight for you is one of the last defenses of the beleaguered politician. Still, true to their mother's fighting spirit, the Davis girls have dug in. And if it helps the only woman who can take on Texas' notoriously restrictive abortion laws to tackle them, we're on board.