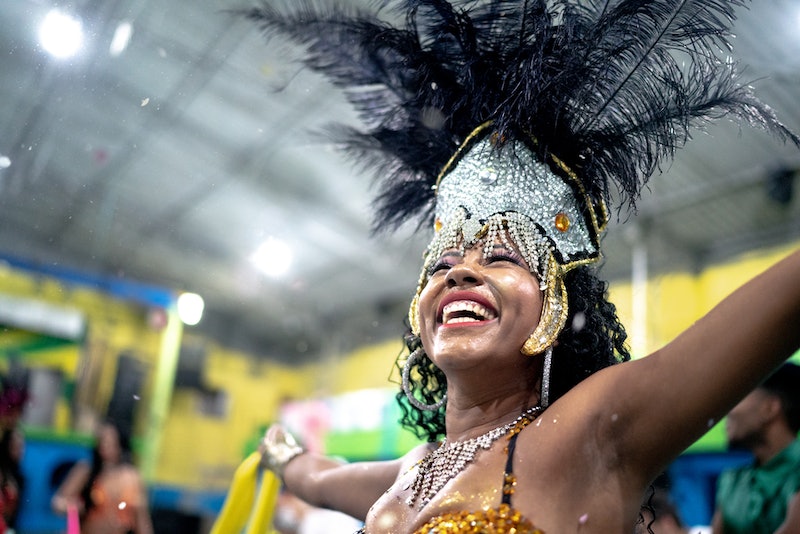 If you're anything like most people, Mardi Gras means bright colors, lots of beads, and just general debauchery. But, have you ever stopped to wonder what Mardi Gras is, really? Much like anything, there's a rich history and backstory you probably never bothered to look into. And, aside from adding a little more meaning to the holiday, knowing more about the celebration is sure to arm you with some pretty impressive trivial knowledge.

In case you weren't aware, Mardi Gras occurs on the Tuesday before the pre-Lenten Christian tradition of Ash Wednesday each year. So, that means Mardi Gras — also known as Fat Tuesday — is tomorrow already.

I went to a Catholic elementary school, and we would always hold a huge celebration at our gym to recognize Mardi Gras. We had tons of food, face painting, and games. And, while I obviously loved that day at school (because it got me out of the classroom), even I never really bothered to dig into the origins behind Mardi Gras. Until now, that is.

Now, I'm curious to know all that this tradition represents — other than stuffing my face and enjoying a giant party. So, I put on my detective hat and did some research to discover the backstory behind this celebration. Here's what you need to know about this raucous holiday.

When did Mardi Gras get its start?

Mardi Gras is largely considered a Christian tradition. But, its roots can actually be traced back thousands of years to pagan celebrations of spring and fertility. Once Christianity arrived in Rome, these popular celebrations were incorporated into the new faith. Religious leaders figured doing so was much easier than trying to eliminate them all together. Because, let's be honest — people are going to keep partyin'.

This melding of that ancient celebration with religious traditions is essentially what transformed Mardi Gras into the prelude to Lent. Because Lent typically involves a great deal of fasting and fish eating, Mardi Gras was a time for people to completely pig out on all of the meat, eggs, milk, and cheese that was in their homes. Hence the name Fat Tuesday.

How did Mardi Gras make its way to the United States?

We all know that New Orleans is essentially the Mardi Gras capital of the U.S. But, how did that happen?

Well, according to many historians, the tradition of Mardi Gras made its way here in 1699, when French explorers Iberville and Beinville arrived in what is now Louisiana. They landed just a little south of New Orleans, and dubbed the spot Point du Mardi Gras. And, voila, the celebration found its way here!

However, when the Spanish overtook Louisiana, the festivities were banned for quite some time. When Louisiana became a U.S. state in 1812, the party was back on!

Now, Louisiana is the only state in which Mardi Gras is a legal holiday. However, the traditions and celebrations have spread to all different parts of the country.

What traditions and celebrations are involved with Mardi Gras?

Mardi Gras is chock full of beloved and treasured traditions, including parties, parades, and floats. How did all of this revelry get its start? In 1857, a secret society of New Orleans businessmen — known as the Mistick Krewe of Comus — put together a torch-lit procession. With marching bands and rolling floats, they made their way through the city. That parade is something that's still celebrated today on Bourbon Street, and krewes are still a major part of the festivities.

King Cakes are another big piece of the Mardi Gras tradition. The season for King Cake actually begins on Jan. 6, and extends through Mardi Gras, and it's meant to commemorate the three wise men who brought gifts to the Baby Jesus. The King Cake is a ring of dough, usually decorated elaborately for Mardi Gras. Inside the cake is a tiny baby figurine, made out of plastic, ceramic, or — in some cases — even gold. Whoever gets the slice of cake with the figurine inside is said to have good fortune, and is supposed to carry on the tradition by making the King Cake the following year.

Other classic Mardi Gras traditions? Throwing trinkets and beads, decorating floats, and wearing masks — all of which are honored and commemorated at large celebrations, including the New Orleans Mardi Gras parade.

So, there you have it. While the day is meant for wild celebrations and — yes — stuffing your face with all sorts of deliciousness, there's a definite history behind it. Now, get out there and party!