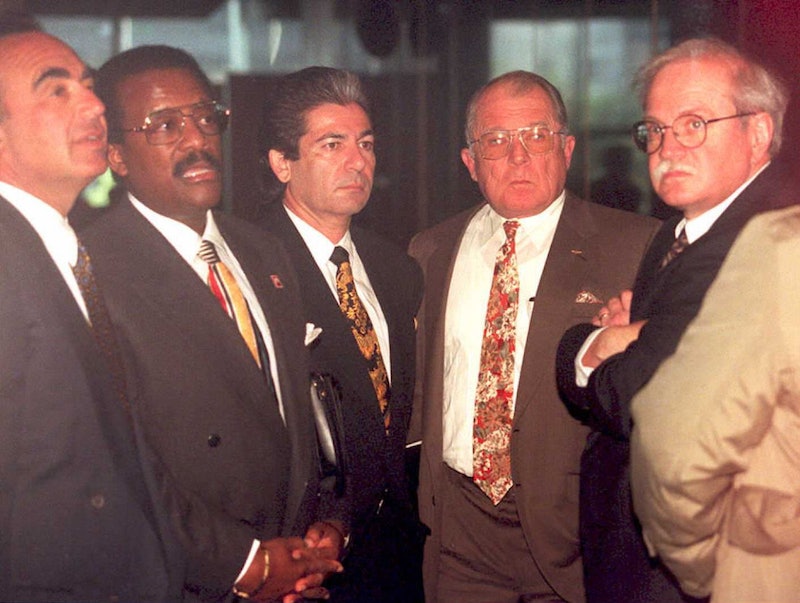 The premiere of The People v. O.J. Simpson: American Crime Story was a fascinating mix of soapiness and detail-oriented recreation. It was also a mix of established facts and speculation, as the writers imagined how the closed-door conversations between Simpson, his family, and his friends happened in the days following Nicole Brown Simpson and Ron Goldman's murders. But the real press conference where Robert Shapiro and Robert Kardashian spoke on June 17, 1994 was the first time that the American public discovered that Simpson was currently a fugitive and had not surrendered himself to the police after a warrant was issued for his arrest, and instead was heading down the freeway in a low-speed police chase in the famous white Bronco driven by A.C. Cowlings.

Because the whole thing was televised, the full videos are still available below, ready to be compared and contrasted with scenes from American Crime Story. Originally, as shown in The People v. O.J Simpson premiere, the plan was for Simpson to self-surrender at 11 a.m., in advance of the press conference scheduled for noon. As the Los Angeles Police Department Commander David Gascon says below, nothing went according to plan, and when several officers went to take Simpson into custody, somehow he got away from them. Gascon then refuses to answer any speculative questions about the situation.

But things got even stranger once Shapiro and Kardashian took the podium. First, Shapiro gives a long, rambling explanation of what happened, though it differs from what we saw happen behind closed doors in American Crime Story's interpretation of the day.

This press conference was a pivotal moment, for several reasons. First of all, the June 17 chase was the first big televised moment of the case, and nationwide, everyone was introduced to Shapiro and Kardashian as the first two faces on Simpson's legal team.

But the final moments of the press conference are actually the most historically important. Kardashian reads, out loud, a note Simpson wrote. You may remember the text from the original American Crime Story trailers. It's a combination of a goodbye and an apology, even though Simpson's letter steadfastly insists that he had nothing to do with the double murder he was being charged for, and would later be found not guilty of. But while the contents of the note were shocking, the most historical moment in this press conference is that for the very first time, the name "Kardashian" became famous.

As reported by the Huffington Post, Robert Kardashian was already friends with O.J. and Nicole Simpson, but with every TV in the nation trained on the Bronco chase and press conference, all of a sudden the distinctive Armenian surname was on the tip of everyone's tongues. Kardashian was the most out-of-place member of Simpson's legal team since, as American Crime Story showed, he hadn't practiced law in years prior to joining Simpson's defense team. But his participation in this press conference marked the first time the name Kardashian would catch millions of people's attention.