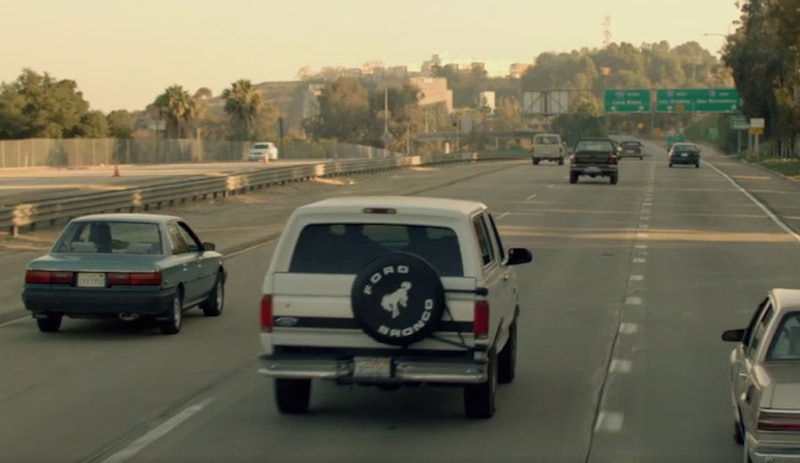 The premiere episode of FX's The People v. O.J. Simpson: American Crime Story ended with O.J. Simpson getting into his white Ford Bronco with his friend Al "A.C." Cowlings. As viewers saw the Bronco hastily switching lanes in the final moments of the episode, I was reminded of the monumental importance of the very real O.J. Simpson Bronco chase in American culture. The police chase made for compelling TV when it actually occurred on June 17, 1994 (95 million people watched on TV, according to AL.com). And, American Crime Story seemingly plans to recreate that buzz when the chase is shown in its Feb. 9 episode on FX, people cheering the Bronco on and all.

In the preview for the second episode of American Crime Story, Cuba Gooding Jr.'s version of Simpson is shown in the back of his white Bronco, holding a gun to his head, while A.C. is behind the wheel. As a slew of police cars trailed behind Simpson, the slow-speed chase is followed by fans of Simpson standing on the freeway, bridges, and ramps, cheering on the famous football player and movie star. This cheering for Simpson is actually what happened back in 1994.

The below real-life TV footage of the chase, which is about an hour long and includes footage from multiple news sources, ends with Simpson returning to his home, where more fans — or just curious bystanders — tried their best to catch a glimpse of the megastar. The old footage, even without the cheering fans, is interesting to see, but the makeshift signs held by people encouraging Simpson to flee from the police takes the chase to a whole other level.

At 9:28 in the above video, you can see people observing the chase while standing on the freeway and, though it's hard to see, some people are waving at Simpson. As one reporter for News Channel 7 said in that moment of the video, "Indeed there are a number of people standing on the side of the road — just the curious and also well-wishers. We watched people wave and blow kisses as Mr. Simpson drives by."

More footage of public's fascination with the chase comes at 21:15, where you can see a crowd of people running toward the Ford Bronco after it got off the freeway at the Sunset Boulevard exit. The overpass bridge at Sunset was filled with people watching Simpson's car chase and running toward his car as he passed.

A Philadelphia Inquirer article from 1994 reported that the signs that people were holding said things like, "The Juice is Loose," "Good Luck, O.J.," and "We Love You, Juice," slogans that are replicated in Ryan Murphy's The People v. O.J. Simpson.

By the time the real Simpson returned to his home with the police in tow, he had a horde of people near his house, continuing to cheer him on, including the person holding the "Save The Juice" sign seen in the photo below.

Yet not all of the onlookers that stood by the police barricade near Simpson's home were necessarily Juice supporters. One woman with a child in her arms told the Philadelphia Inquirer in the aforementioned article, "We came up here to be part of what was happening. To be able to say we were here."

After over 20 years, the fascination surrounding the details of Simpson's trial hasn't diminished, and it lives on in footage of the white Ford Bronco cruising through the California highways followed by a horde of police cars. American Crime Story will continue its realistic portrayal of the events surrounding Simpson's trial by including the Bronco chase for a whole new generation of viewers to see.