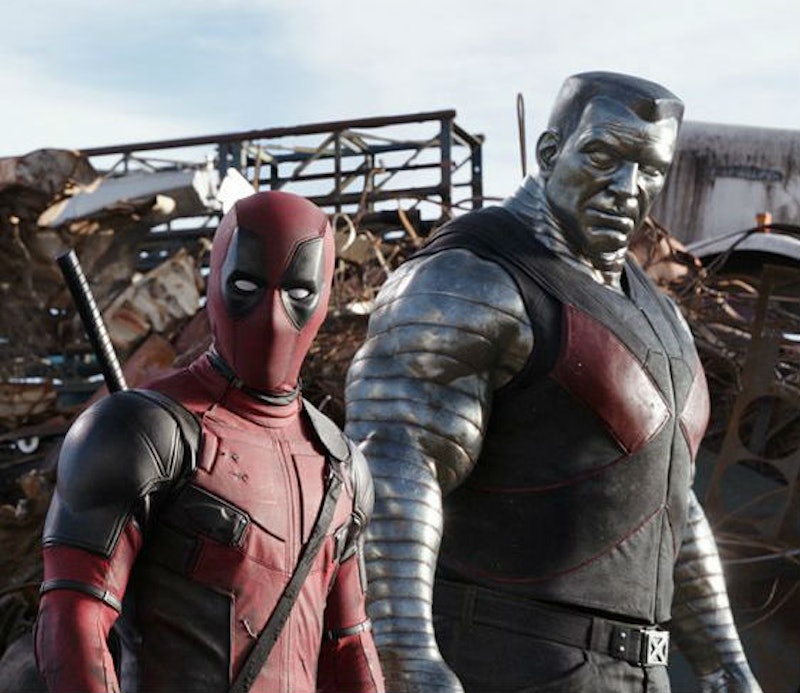 In the new film Deadpool, Ryan Reynolds portrays the Merc with a Mouth — a fast-talking, joke-making, fourth wall-breaking, superpower-ed assassin. Also, since this is a Fox-distributed superhero movie, Deadpool belongs to the larger X-Men universe. But not only does Deadpool exist within the same world as the X-Men, it turns out he even knows some of them. And while the movie does a good job of establishing how Deadpool gets his powers and becomes a hero (or antihero), it totally whiffs on explaining the relationship between him and Professor X's mutant team. So how does Deadpool know the X-Men?

In the film, the X-Man Colossus and X-Men trainee Negasonic Teenage Warhead show up early on to confront Deadpool on his, I'll just say, questionable activities. But when they encounter each other, Deadpool already knows them, even though as far as the audience knows, this is their first meeting. So what gives? One way to explain this could be Deadpool's character trait of being somewhat omniscient. He breaks the fourth wall, and he knows he's a fictional character, so it stands to reason that he would know who the X-Men are. Then there's the obvious unsaid possibility that, since they're both superpowered entities existing in the same world, they've crossed paths before since they run in the same circles, and it's then left up to the audience to put two and two together. But what if you want a little more backstory? Well, for that, you should look to the comics to see how Deadpool first met the X-Men.

Deadpool made his Marvel Comics debut back in 1991, in the pages of The New Mutants. The New Mutants was a spinoff of the X-Men, and focused on younger X-Men-in-training. In the film Deadpool, Negasonic Teenage Warhead's costume appears to be a reference to the New Mutants, who wore essentially the same outfit back in the day.

Now, in Deadpool's first appearance in The New Mutants he was a straight up villain (he wouldn't become the anti-hero he's known as today until much later). In that issue, he is hired as an assassin by the supervillain mutant Tolliver to kill Cable, who was leading the New Mutants at the time. Deadpool is already a wisecracking, fully-powered mercenary at this time, but that doesn't help him much as he ends up being defeated by Cable and his young mutant heroes. This was the first time, at least in terms of publication, that Deadpool ever crossed paths with any X-Men. He would then go on to appear sporadically in various X-Men books in the ensuing years, especially X-Force, where he has gone on to become a team member in more modern times.

The Deadpool/X-Men connection will likely be explored further in future Deadpool movies, with Cable himself seeming like a prime candidate to bridge the gap between the two franchises (in the comics, Cable is the X-Man Cyclops's son from the future). But for now, it looks like Deadpool just knows the X-Men because, well, who doesn't know the X-Men?