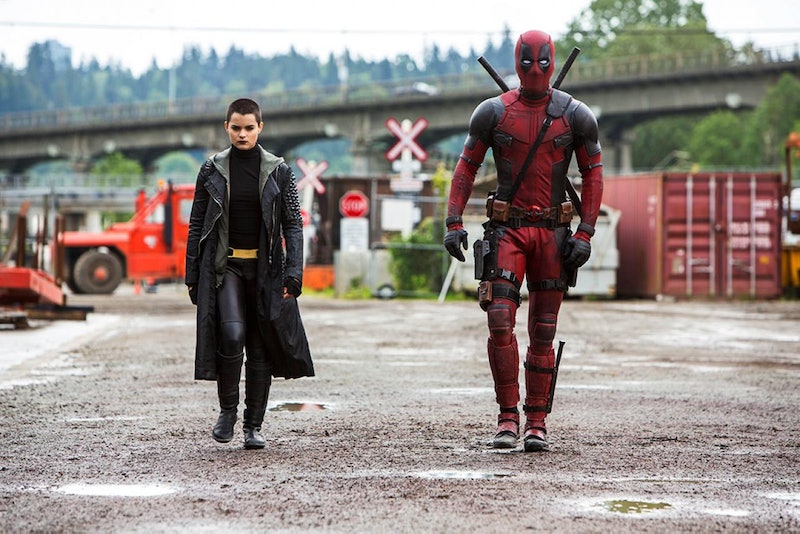 Long before a solo movie was even in production, Deadpool became a fan-favorite Marvel character. It's not exactly a surpise then that most of the marketing around Deadpool focuses on the sarcastic anti-hero himself. It's Deadpool, the antidote to the beleaguered protectors and gee-whiz boy scouts who occupy a lot of the superhero space, who audiences will come to the theater on Feb. 12 to see. Even if Deadpool is a big enough personality to fill the screen on his own, it's probably best that he have some allies and enemies to battle and annoy. One of those allies is Negasonic Teenage Warhead, played by newcomer Brianna Hildebrand. How can you not be curious about a character with a name like that? Negasonic Teenage Warhead comes from Marvel comics as well, though she's branching out into some new powers on screen.

As you probably guessed, it was Negasonic Teenage Warhead's name that first got her written into the Deadpool script. According to Screen Rant, Deadpool writers Rhett Reese and Paul Wernick fell in love with her superhero label as soon as they saw it in a written list of available characters. (I say "available," because the ownership of Marvel characters is a bit of a tangle. 20th Century Fox owns the rights to some, Disney owns others, and so on. That limits any given project as to which heroes and bad guys it can poach from the comics.) Negasonic Teenage Warhead's name suggests an illustrious and possibly bloody history in the source material. In fact, she's a relatively un-tested character.

Negasonic appeared first in an X-Men comic, as Ellie Phimister, a pupil of Emma Frost. The young woman showed an eerie ability to predict events through her dreams. She tells her teacher that she dreamt 50 times in one night that her home, the fictional African nation Genosha, would be destroyed. She and the rest of her countrymen are massacred soon after by the Sentinels, who you should remember from X-Men: Days Of Future Past. She's resurrected twice, first only in Emma's thought-projections, and then for real by an engineered alien virus. Her new life doesn't last long; Ellie is offered as a sacrifice to Selene, the Black Queen of the mystic and powerful Hellfire Club.

Forget that version of Ellie when you walk into your Deadpool screening. Reese and Wernick basically wiped her slate clean, including playing down her telepathic powers. Director Tim Miller told Empire that Negasonic Teenage Warhead's character was handpicked to fill the role as Colossus's student of sorts, an X-Men member in training. And a telepath alone didn't fit in as the ward of a 100% steel mutant. Instead, Negasonic Teenage Warhead can actually control fire power; she's basically a human warhead. "She can transfer the force of the explosion down so she can move upwards," Miller said. "She can put it into a punch if she wanted to."

Sounds cool, but what really grounds Negasonic Teenage Warhead in the Deadpool universe is her sullen, over-it attitude. Hildebrand told Screen Rant that her character and Deadpool have their conflicts. "It’s kind of like brother and sister," she said. "They are on the same side. But they kind of butt heads a lot of the time."

An exploding, goth teenager is a dangerous person to butt heads with, Deadpool! Expect sparks to fly when this unlikely duo join forces.