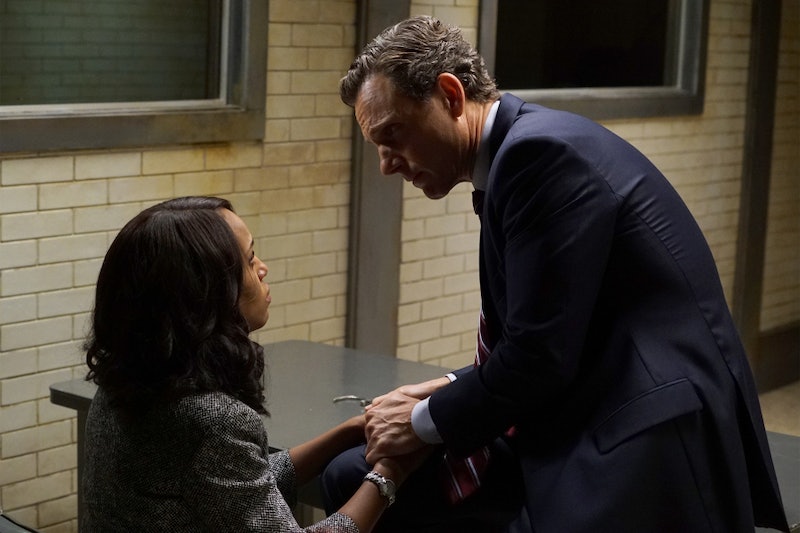 Scandal is known for making bold political statements, and this year's midseason finale proved to be no exception when Olivia decided to have an abortion on Scandal , right in front of an audience who didn't even know that she was pregnant in the first place. Of course, this storyline instantly became a source of controversy among viewers, which is to be expected when such an important and highly sensitive topic is addressed. But now that Scandal is gearing up to return, I'm starting to wonder if this secret (like most secrets on this show) will ever find its way to the surface. Will Olivia tell Fitz about the abortion? I somehow feel as though his reaction wouldn't be all that understanding.

Granted, Olivia is by no means obligated to tell him anything. But that doesn't mean he won't find out in some way or another, whether she wants him to know about it or not. Many may think that because of the six-month time jump that the topic will never be broached again. And maybe they're right. But on a show like this, it's difficult to know for sure if a secret is ever really buried for good, and this heated argument may be too tempting for Shonda Rhimes to resist. Because make no mistake, Fitz would not take this news well.

During a recent chat with Entertainment Weekly, Tony Goldwyn (who plays President Grant) said that Fitz would be positively devastated if he ever discovered what Olivia did. "Second to the death of his son, that’s the worst thing that could ever happen to Fitz — to find out that Olivia was pregnant with his baby, had an abortion and did not tell him," Goldwyn remarked. But that's not to say that it would ruin any chance of Olitz getting back together, at least not in this actor's eyes. "He got beyond the fact that her father was responsible for murdering his son," Goldwyn explained. "There’s no logic to Fitz’s love for Olivia, so I think he could get past it. I think he would have to because he’s in love with her. It’s going to be horrible if he finds out."

But that's still a very big "if" that may never actually come to pass. Olivia knew the choice that she wanted to make and I have a feeling she has no regrets about the actions that she took. It was her decision and hers alone, so Rhimes may not feel it necessary to drudge the whole thing up again. But if she does, you better believe she'll have Olivia put Fitz in his place (yet again) and make him realize how she had every right to do what she did. Nobody puts this Gladiator in a corner.