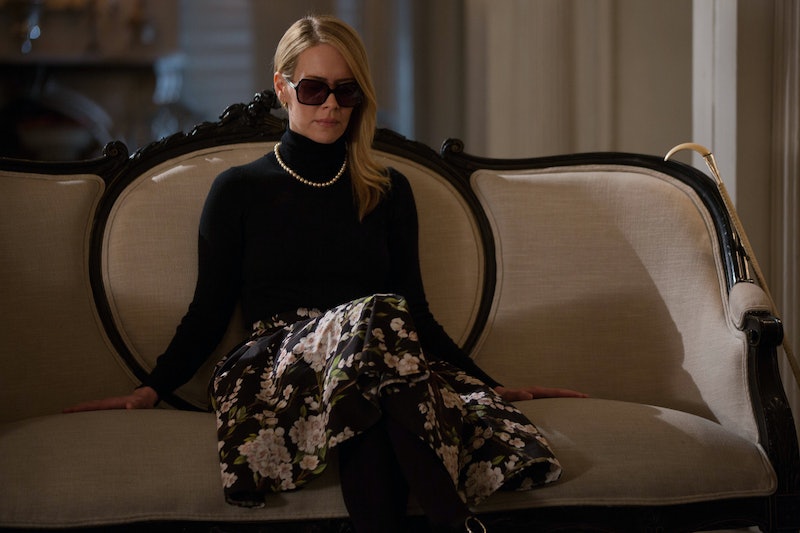 Last week, American Horror Story effectively killed off three characters (OR DID IT?!) and cleared the stage in its third season finale for the event we’ve really been waiting for: The Seven Wonders, and the crowning of the next Supreme. And when I say “really been waiting for,” I of course mean “accepting as this season’s endgame even when it doesn’t seem all that interesting.” Like we touched on last week — it’s in the greatest strengths of AHS that this show also finds its most glaring weakness. We’ve been trained over 12 episodes to expect minotaurs and beheadings and voodoo kill-shots and blood-sex (haha remember that?), this unending cycle of shock one-upmanship. So when you’re nearing the finish line and discover the final, hopefully INSANE dash amounts to basically the “slobs versus snobs” Greek Games of any solid fraternity movie… well, it’s hard not to be a little disappointed.

…But just a little, because

Disappointment doesn’t enter into the equation when your episode opens with Stevie inextricably twirling through an old New Orleans mansion to this inspirational and appropriate number:

It’s sort of crazy to think back to 12 weeks ago (2013! We we were all so young) when this show was, in fact, still about a boarding school for young witches. The pilot only hinted at the baroque horror mashup this season would become; at the time, I thought we were headed for some gruesome, cynical version of X-Men. And now, with all of the show’s Grand Dames having kicked the bucket FOR REAL (MAYBE), we finally get back to that initial setup. Teen witches. Burgeoning powers. Magical cat fights. How’d the Seven Wonders pan out for all our ladies in black?

ROUND ONE: Telekinesis (Move Stuff)

If you can’t pass a round that just requires you move a candle with your mind then what are you even doing in the competition?!

Because they’re girls, all the girls just use this round to slap each other in the face and pull hair. Madison even goes a bitchy step further, making Kyle kiss her, and then her boots. It’s not very nice, but then you don’t get to be the Supreme of THIS coven by baking Tollhouse cookies for everyone. At least without cyanide.

ROUND THREE: Descent into the Netherworld (Hell Ding Dong Ditch)

The task is simple: get in, get out, all before sun-up. Queenie’s already taken a few trips down there, and pretty readily returns. Then Madison (her hell was starring in a live network version of The Sound of Music) and Zoe (Kyle keeps breaking up with her, repeatedly). Misty, however…

RESULT: Dust to dust, Misty. I hope the swamps are beautiful in Heaven

What a fun round this is, everyone teleporting around the house and grounds, really whooping it up! But then, failing to look before she leaps, Zoe accidentally teleports onto the spiked front gate.

…Silver lining is that now they can jump straight to the resurrection trial! Queenie tries, and fails — she’s out. Which leaves Madison, who’s proven her ability before. But Madison refuses. That is, unless Myrtle and Cordelia name her the Supreme? “Crown me…or kiss my ass,” says Madison. They’ll do neither. Regroup.

ROUND FIVE: Pyromania (Light ‘Em Up)

Guess what? Maybe Cordelia could be the next Supreme, ever think of that? At the behest of Myrtle, Cordelia joins the competition of teenagers. Within 30 seconds, she’s passed rounds 1-5.

RESULT: Cordelia and Madison, duking it out

Cordelia could do this one blind, which she is forced to because of her actual blindness. Madison struggles, repeatedly, and finally throws in the towel. “I’m going back to Hollywood, where people are normal!”

Having never done this before, the jury’s out on whether Cordelia has the chops to pull it off. But she does — right as Kyle is murdering Madison for, you know, basically murdering Zoe — and wins the crown.

RESULT: Cordelia is YOUR 2014 Supreme! And she's got her eyes back! And she's more beautiful than she was before! (Pay no attention to the banner image!)

What's really interesting about "The Seven Wonders" as an episode, to me, is the way none of the twists we could have imagined last week really came to fruition. I mean, yes, Fiona came back. (She was always going to come back, give me a break.) But it wasn't to bludgeon her daughter to death with a mace, or even to say mean things. She was too frail to say mean things! No, all she wanted to do was get some closure.

And so did Murphy, Falchuk, and Co., who rather than send us off with a huge rug-pull or elaborate murder of someone, anyone... gave Robichaux's a bright, fresh start. Underneath the insanity that colored (and made awesome) so much of this season was in fact the story of a daughter, Cordelia, and the two mothers she was torn between her entire life. One helped her believe in herself and realize her true potential; the other criticized and scarred, a witchy Royal Tenenbaum, finally realizing she had to die for her daughter to really live.

...So what I'm saying is that AHSC actually had a HAPPY ENDING, if you can believe it.