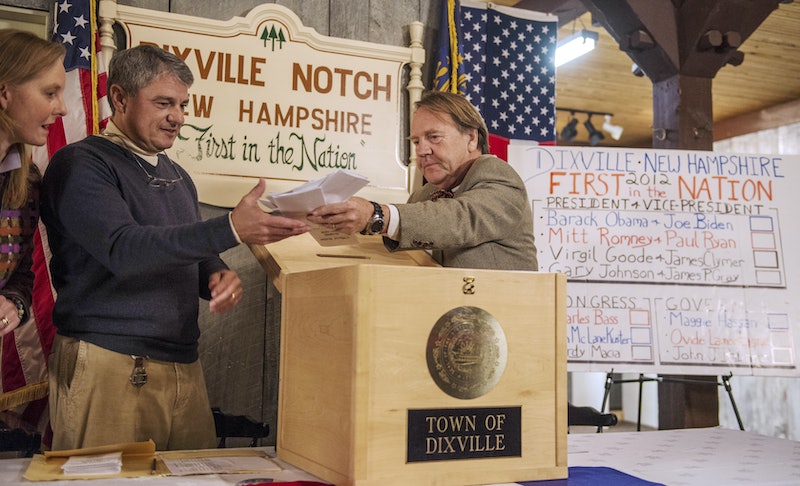 For New Hampshire residents living in Dixville Notch, Hart's Location, or Millsfield, voting in the primaries is a job fit for night owls. For several decades since the 1960s, these three towns in have abided by a strange midnight voting tradition. Needless to say, casting the first votes is a significant point of pride for both the state and these few small towns, which are already bustling the night before the rest of the polls open their doors to the eager early birds. Generally, New Hampshire's polls are open from about 7 a.m. until 7 p.m., but the midnight votes were counted long before then. And the whole situation just got a little more bizarre. Though they may not be an accurate indicator of how the entire state will vote, the midnight voting results suggest that one Republican candidate has gained some momentum in the mountainous northern forests of the state.

In snowy New Hampshire, it's rather unlikely that people will leave their sleeping children behind to trek through the White Mountains to the Balsams, a step-back-in-time resort where the first votes are cast. In Dixville Notch, a brave nine individuals decided they were up to the challenge. According to CNN, Bernie Sanders beat Hillary Clinton by a 4-0 sweep, while John Kasich barely came out above Donald Trump in a 3-2 vote. Kasich also won five of the 14 votes cast in Hart's Location. Donald Trump and Chris Christie trailed behind them. Hart's Location also favored Sanders, who beat Clinton in a 12-7 decision. Millsfield's 21 voters showed different tastes. Ted Cruz received nine votes, which exceeded Trump's three. On the Democratic side the battle was slightly closer, as Clinton won two votes and Sanders received one.

In total, 65 people voted in the three precincts. With 17 of those votes, Sanders came out on top. For Republicans, Kasich wowed the nation by tying with Cruz and Trump at nine votes total. However, Kasich's win shouldn't come as a surprise, because it's based on simple geography. The Ohio governor was the only candidate in this year's presidential race to campaign in these three communities, which are located rather inconveniently. Kasich's decision to go out of his way to campaign in the rural, sparsely populated towns was clearly appreciated by some residents.

At first glance, it may appear as though midnight voting isn't drawing in the masses of Dixville Notch, the most well-known of the three towns. But in reality, the polls attracted 75 percent of the precinct's population. That's right — the sleepy mountain town is populated by just 12 people, according to the 2010 U.S. Census Bureau. In an interview with CNN, Tom Tillotson, the man who has led the midnight voting at the Balsams for years on end, explained why being first is so important to the community:

This is an example of American democracy where 100% of the voters come out and vote. It's also a part of a primary process where it's sort of an endangered species where the candidates actually go out and talk to the voters, and anything we can do to keep that alive helps our political process.

According to state law, any small town in New Hampshire is entitled to open its polls at midnight and close them after each resident has voted. It seems to be working pretty well for Dixville Notch, which receives more attention than its two neighboring precincts for a reason: It's peculiarly good at predicting the Republican nominees. NPR also reported that although Dixville Notch doesn't have a an impressive record of foreseeing the state's primary candidate choice, it has correctly predicted the Republican nominee each presidential election year since 1968. If John Kasich ends up pulling ahead of the pack, then Dixville Notch is going to set some unbelievable records.