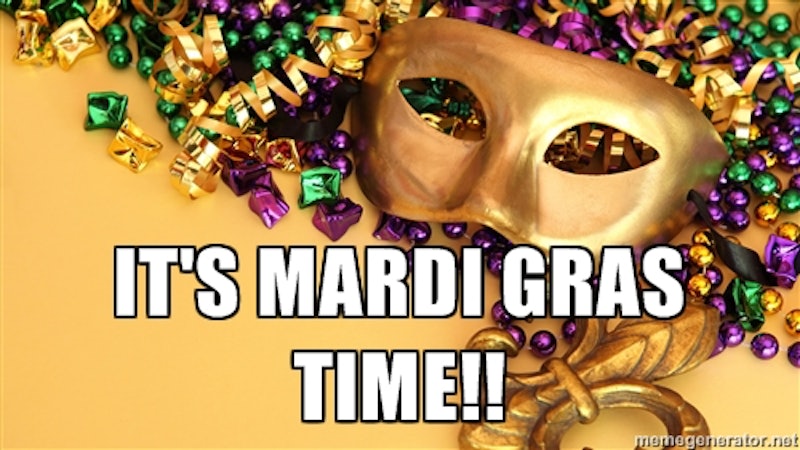 Happy Fat Tuesday, everybody. Is there any better way to honor this day than with some ridiculous Mardi Gras memes? Well, honestly, stuffing your face with all sorts of deliciousness is probably better. But, these memes are a close second.

Wondering how on earth Fat Tuesday even got its start? Well, I hate to question a great thing, so I'll spare you a major history lesson. But, I think it's important to at least know a little bit about the origins of this raucous holiday. I'll make it quick, I promise.

While Mardi Gras is largely considered a Christian, pre-Lenten celebration, its roots can actually be traced back thousands of years to pagan celebrations of spring and fertility. When Christianity arrived in Rome, religious readers decided to incorporate these celebrations into the new faith — because it was way easier than trying to get rid of them altogether. Thus, Mardi Gras became one last big hoorah before the restrictions of Lent.

Because Lent usually involves a great deal of fasting and fish eating, people would spend the day before eating all of the meat, eggs, cheese, and milk in their homes. That's how it became known as such a decadent holiday.

Alright, now that we have that out of the way, let's jump into the good stuff, shall we? Take a look at these Mardi Gras memes, and you're sure to kick off the holiday the right way!

Because beads are a badge of honor at Mardi Gras.

This delicious, deep fried Polish pastry is the perfect traditional treat. Because, honestly, you literally can't eat just one.

Hey, this holiday isn't for everyone.

Enjoy the day in all of its ridiculous glory, you filthy animals.

More like this
21 Galentine’s Day Memes To Celebrate Your Best Friends
By Meghan Bassett and Mia Mercado
Dunkin’s Valentine’s Day Lineup Includes A Drink That Tastes Like Dessert
By Alexis Morillo
15 Black-Owned Liquor & Wine Brands To Add To Your Bar Cart
By Alexis Morillo
12 Aphrodisiac Desserts To Spice Up Your Valentine’s Day
By Kaitlyn Wylde
Get Even More From Bustle — Sign Up For The Newsletter
From hair trends to relationship advice, our daily newsletter has everything you need to sound like a person who’s on TikTok, even if you aren’t.