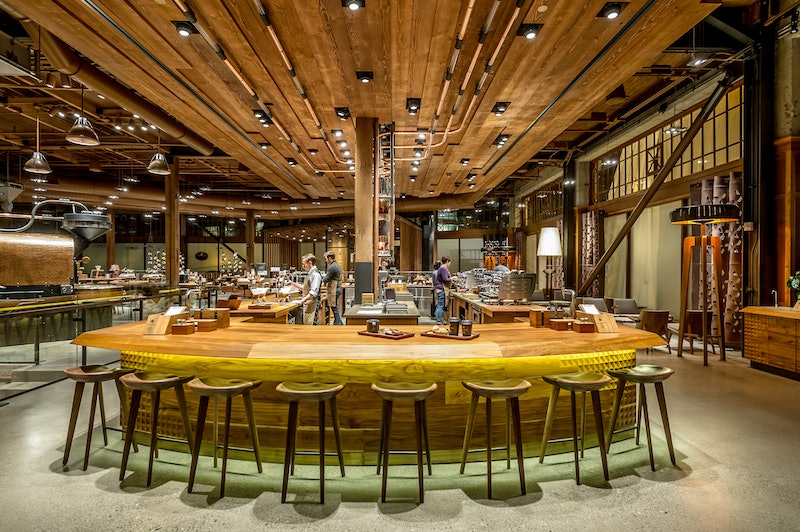 Of all the beautiful rumors mine ears have heard in the time I have spent on this earth, by far the most beautiful is that there might be a Starbucks Super Store opening in New York City. Although Starbucks has not confirmed, the New York Post reports that Starbucks is looking for a 15,000 to 25,000 square foot space to open up an enormous location that will echo their Reserve Roastery and Tasting Room in Seattle. While this is every caffeine-happy human's dream come true, there is a chance that it is only that — a dream. But I will hold fast to my hope, because if the ginormous location in Seattle is any indication of what it would be like, it would be well worth the wait.

Bustle reached out to Starbucks to see if there was any truth behind the speculation, and an official Starbucks spokesperson told us that they do not comment on rumors — so until anything is confirmed, I'll be wandering around various Starbucks locations in Manhattan singing Adele's "Rumor Has It" to myself and crossing all my fingers and toes. (According to some recent data that there is a Starbucks every 5.6 blocks in Manhattan, that should be an easy feat indeed.) But while I risk getting some major side eye from fellow coffee enthusiasts in line, can we take a moment to imagine just how amazing this prospective Starbucks Super Store would be? For your reference, here is the Starbucks Reserve Roastery and Tasting Room in Seattle:

LOOK AT THIS BEAUTIFUL THING THAT THEY HAVE THAT I ALSO WANT.

Like, I get it. We're not Seattle. We did not witness the birth of Starbucks or take part in the miracle of its creation the way the Pike Place Market did back in 1971. But that doesn't mean we don't also deserve our own super store! Haven't we proven our love for Starbucks time and time again? 5.6 BLOCKS, guys. I can practically see two Starbucks locations from my office window and you can bet your bottom dollar I would try to live in one if I could. Specifically if it looked like the inside of the Seattle one.

So what exactly would make a Starbucks super store so special? Aside from how beautiful it would be, there's a chance that it would offer all the some awesome things that the one in Seattle does. According to Starbucks, here are a few things you can find at the Seattle super store (that, fingers crossed, might be included in the rumored New York store!):

Coffee Specialists On Site To Talk Coffee To You

In the Seattle location, there are coffee specialists on hand to discuss flavor profiles and the sources of the coffee beans coming into the roastery, plus the space is designed so you can see the process of the coffee roasting from all angles of the space. You can get coffee LEARNT.

The Coffee Library in the Seattle location offers more than 200 books on coffee, as well as spacious areas to meet with other people or live out your cozy fantasy of reading a book with your cuppa and taking in some awesome views of the rest of the space. (Plus, is there anything more meta than drinking coffee and reading a book about drinking coffee? LET'S MAKE THIS HAPPEN.)

While I don't know if New York would luck out enough to get on this level, the Seattle location is where Starbucks Reserve is packaged — and only one percent of the beans that come in are considered quality enough to make the cut for it. If we had a location in New York that mirrored that one, maybe we would get to try some exclusive flavors, too. In any case, the Roastery does offer a unique food and beverage menu that you can't get anywhere else, and the green-eyed monster in me hopes that there's a similar version coming out way, too.

But even if this prospective New York location happened and it was nothing at all like the Reserve Roastery and Tasting Room in Seattle, I think we can all agree that we want — nay, need — a gigantic Starbucks wonderland in New York City. Keep all your fingers caffeinated and crossed!