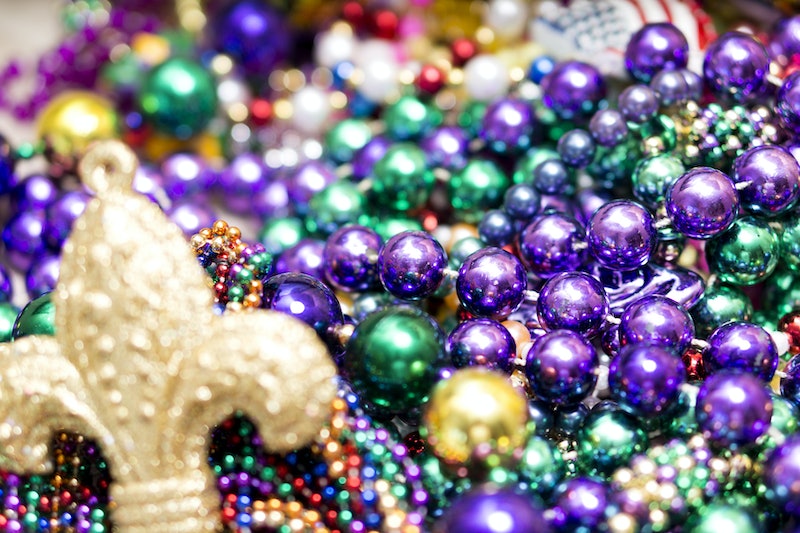 You've seen the parades, collected the beads, and have even gotten your hands on true, authentic Mardi Gras King Cake in all of its purple, green, and gold glory, but let's pause for a second — what do each of the Mardi Gras colors mean? Every single year, the streets of New Orleans (not to mention cities all over the world) are awash in vibrant hues as people don their most dazzling masks and ensembles to celebrate the notoriously raucous celebration that marks the final day before Lent. While the holiday has devolved into something of a booze fest, there's actually a rich history behind the debaucherous revelry, and colors play a very important part.

First, a bit of a history lesson (I promise to keep it quick, in case you have a parade of your own to attend to). Though Mardi Gras occurs right before Lent and is generally considered to stem from Christian tradition, it actually goes back farther than that and is believed to have been inspired by Pagan celebrations of spring and fertility that later became adopted by Christian leaders in Rome. French explorers are believed to have brought the festivities with them to Louisiana in 1699, and Mardi Gras became a full-on party throughout the United States during the 19th century.

The celebration is popular in many different cities, and each region puts its own unique twist on how the day is observed, but some things are constant throughout — like the colors most often associated with Mardi Gras. According to most reports, the New Orleans Krewe of Rex chose purple, green, and gold as the party's color scheme in 1872 (some people believe it was inspired by the Russian Grand Duke's house colors — he just so happened to be visiting that year). However, the palette wasn't made official until a few decades later during an official Mardi Gras parade dubbed "The Symbolism of Colors." The colors have stuck around ever since, and can be found pretty much everywhere come Mardi Gras — but what does each color mean? Let's break it down:

The color green is said to represent faith. Beads in this color used to be handed out to people who represented this characteristic the best.

Purple is normally considered to be a royal color, and in this instance stands for justice.

Gold stands for power — and on Mardi Gras, it can be found everywhere.

So, there you have it. Of course, you can wear pretty much whatever you want on Mardi Gras — it's a day that's sort of known for its "anything goes" policy — but if you want to make it seem legit, work in some purple, green, and gold. Or, dress up like these guys. If not now, when, you know?

More like this
How Long Does Leftover Stuffing Last? Here's When To Toss It
By Chelsey Grasso and Alexis Morillo
32 Cheap Gifts For Your Bestie That Go Beyond Basic BFF Necklaces
By Emily Kelley, Mia Mercado and Brittany Leitner
23 Genius Gifts To Get Someone You Don't Know Very Well
By Jessica Booth, Lauren Grant and Brittany Leitner
6 Friendsgiving Games To Liven Up Your Party
By Alexis Morillo
Get Even More From Bustle — Sign Up For The Newsletter