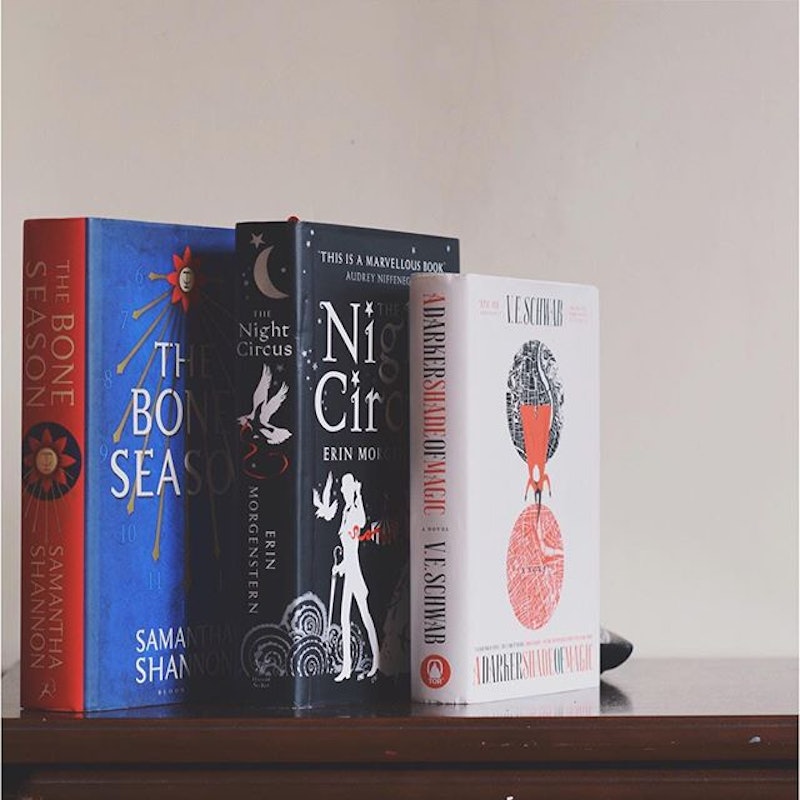 Tuesday was a big day for Scarlet Guardians, as they finally got their hands on Glass Sword: the second volume in Victoria Aveyard's bestselling Red Queen series. There's no doubt that Aveyard's readers will devour her newest novel, but quick and voracious consumption leaves them with one big problem: what to read after Glass Sword .

The great thing about the fantasy genre is that, for every finished, must-read saga like The Lord of the Rings, there's a brand-new series just starting to peek out like a spring crocus. That means the Scarlet Guardians have a veritable plethora of bewitching reads to look forward to when they finish the last page of Glass Sword and must face the long, Aveyard-less year that lies before the as-yet untitled Red Queen No. 3.

The 18 fantasy series listed here are all ongoing, and most debuted within the last few years. There are a few old faces, and some smash-hits, but I hope that most of the books here will be fresh for your choosing. Where available, I've included the release date for each series' next installment. As always, please share your own suggestions on Twitter, because this list isn't even close to exhaustive.

Here are the 18 fantasy series you can start after you finish Glass Sword.

The Fifth Season kicks off N.K. Jemisin's Broken Earth trilogy. The novel follows a woman named Essun as she chases her murderous husband across a dying landscape to rescue their daughter from his clutches.

Look for The Broken Earth No. 2, The Obelisk Gate, in stores on August 16.

2. The Young Elites by Marie Lu

After a disease wrecks her country, survivor Adelina finds herself left with an eerie gift that makes her one of the Young Elites. Now she's torn between two factions who want to claim her: the inquisition hunting down those with powers, and the secret society many call home.

3. A Darker Shade of Magic by V.E. Schwab

As a Traveler, Kell journeys between parallel versions of London. But when the correspondence courier of kings commits accidental treason, he's forced to hide out in the least-magical city of them all: Grey London.

A Gathering of Shadows, the sequel to A Darker Shade of Magic, hits store shelves on February 23.

In Sorcerer to the Crown, England is running out of magic, and it's up to one man to find out why. Zacharias, a former slave and the current Sorcerer Royal of the Unnatural Philosophers, heads out to Fairyland to solve the mystery, but he might find something else along the way.

5. The Great Library by Rachel Caine

What if the Great Library of Alexandria had never been destroyed? That's the question behind Rachel Caine's speculative fiction novel, Ink and Bone. In a world where personal book ownership is banned, a hero must choose between family, friends, and the institution he believes in.

Look for The Great Library No. 2, Paper and Fire, on July 5.

6. The Dandelion Dynasty by Ken Liu

Kuni Garu and Mata Zyndu led an uprising that successfully deposed an emperor. Now the two friends find themselves heading up opposing factions in the battle to fill the leadership void they created.

The sequel to The Grace of Kings, The Wall of Storms, comes out in October 2016.

The Temeraire series is one of the oldest on this list. It all began in 2006, when author Naomi Novik reimagined the Napoleonic Wars with dragons instead of airships in His Majesty's Dragon.

Temeraire No. 9, League of Dragons, flies into a store near you on May 10.

8. Six of Crows by Leigh Bardugo

Kaz Brekker is staring down a thief's dream heist, but he needs a little help to pull it off. He pulls together a crack team of six ruffians with special skills, but the band of bandits soon find themselves in charge of saving the world.

Check out Six of Crows before its sequel, Crooked Kingdom, hits store shelves on September 22.

9. The Witchlands by Susan Dennard

As war tears the Witchlands apart, each of the fighting factions seeks a Truthwitch: a rare type of sorcerer who can distinguish truth from lies. Two young women, one of them this sought-after breed of witch, must rely on their friendship and their own powers to keep themselves alive.

The Witchlands No. 2, Windwitch, is currently slated for a 2017 release.

What list of most-anticipated fantasy sequels would be complete without mentioning George R.R. Martin's hit series? The wars and court intrigue begin in A Game of Thrones, as Houses great and small fight for the right to rule the Seven Kingdoms in the wake of a coup.

11. The Song of Shattered Sands by Bradley P. Beaulieu

In The Twelve Kings in Sharakhai, author Bradley P. Beaulieu takes readers to a great desert capital ruled by 12 immortals. When a young peasant breaks curfew to venture outside on a holiday, she discovers a secret about the Kings' power that could help overthrow them.

DAW will publish The Song of the Shattered Sands No. 2, With Blood upon the Sand, in 2016.

12. The Cinder Spires by Jim Butcher

Taking a break from his bestselling Dresden Files series, Jim Butcher transports readers to a land of steampunk magic in The Cinder Spires No. 1, The Aeronaut's Windlass. When his ship is damaged in an act of war, a merchant Captain takes up espionage for his Spire in order to return to his business. But more deadly battles are to come, and Captain Grimm's alliances may be tested sooner than he thinks.

13. An Ember in the Ashes by Sabaa Tahir

To rescue her imprisoned brother, Laia joins a resistance group and spies on the Empire from within its military academy. She teams up with the academy's star pupil, Elias, who wants to flee the Empire once and for all.

An Ember in the Ashes No. 2, A Torch against the Night, will be available on August 30.

14. The Borden Dispatches by Cherie Priest

Lizzie Borden fights cosmic weirdness in this new series from Boneshaker author Cherie Priest. Lizzie's adventures begin in Maplecroft, where she first faces the sea-lurking evil that claimed the lives — and sanities — of her parents.

15. A Court of Thorns and Roses by Sarah J. Maas

"Beauty and the Beast" meets Irish legend in this new series from Throne of Glass author Sarah J. Maas. When Feyre kills a wolf, the beastly Tamlin appears to avenge its death. As repayment, he spirits Feyre away to the Fae world, where a darkness awaits them both.

A Court of Thorns and Roses No. 2, A Court of Mist and Fury, comes out on May 3.

16. The Wrath and the Dawn by Renée Ahdieh

In this retelling of A Thousand and One Nights, heroine Shahrzad vows revenge after her best friend becomes one of the infamous caliph's murdered brides. She sets out to seduce the wicked ruler, but finds herself falling in love with the man she swore to hate.

Shahrzad's adventures continue in The Wrath and the Dawn No. 2, The Rose and the Dagger, which hits store shelves on May 3.

Sunny can't help but stand out. She's an American-born Nigerian whose albinism keeps her isolated. But when a vision of the future reveals the powers that lie hidden within her, Sunny is thrust into a world of magic and mystery that might be more dangerous than the one she left behind.

Akata Warrior, the Akata Witch sequel, is currently slated for a September 2016 release.

18. The Sunbolt Chronicles by Intisar Khanani

Hitomi is a member of the Shadow League: a group of resistance fighters who want to overthrow their country's evil Arch Mage. When the Shadow Leauge catches wind of the Arch Mage's plan to assassinate a powerful family, she volunteers to help lead them to safety. But the fleeing family and their escort are captured by the Arch Mage, leaving Hitomi to her own devices for escape.

The Sunbolt Chronicles No. 2, Memories of Ash, hits store shelves later this year.